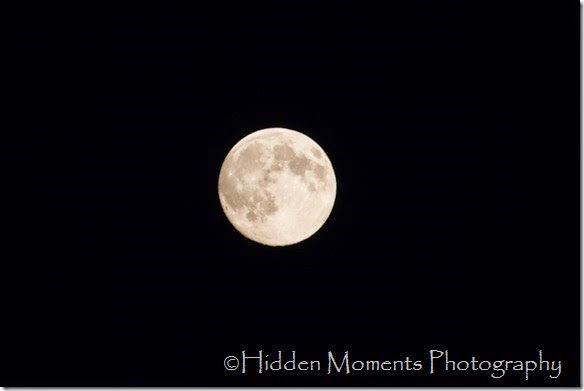 The in-laws are in town for a short visit and so we took them to Blossom Music Center for a Mozart concert on Saturday night. I looked all around but evidently I was the only photographer in the entire crowd (of several thousand people) who thought it might be a good idea to bring along a camera, tripod and remote shutter release to take a picture of the Supermoon. I know I was an oddity when, at the intermission, I set up a tripod and spent time taking pictures of the moon.

I am pretty darn pleased with the result.

The night was crystal clear. I had a fabulous line of sight view as the moon rose over the trees.

Now last night was a different matter. It was very humid and a bit hazy but I gave it another go. 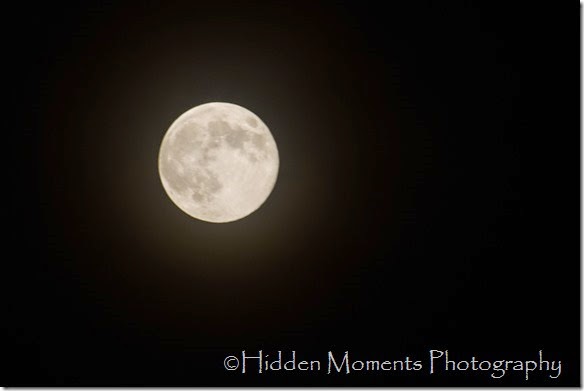 You can see that there was a slight haze around the moon and it was a bit harder to get a completely clear picture but I am still pleased.

Using the tripod was absolutely essential both because the low ISO and tamped down fstop meant complete camera shake without it. And I also used my remote shutter release which has proven to be one of the best $20 investments in camera equipment that I have made recently. I am sure last night that my neighbors thought I was absolutely insane. I started checking the position of the moon shortly after 8:30p (moonrise being 8:18p last night) but was having a hard time knowing exactly where it was. I went so far as to go online, find out where on the horizon it would be located and then getting out the iPhone compass to plot it.

Nerdlike photographic intensity? I have NO idea what you are talking about.

Then, once I finally found that the moon had risen enough to be glimpsed over the trees I spent time walking up and down my short street, setting up the tripod in people’s yards and trying to overcome the ambient light from our dang streetlights. Take a picture, move to another lawn. Take a picture, move to another lawn. They already think I am a bit odd when I lay down on my driveway to take pictures of the Bumble in the snow. This will just confirm their suspicions.

Unfortunately I do not think that tonight will find me out taking pictures of the Supermoon, on the day when it will be at it’s best. Currently my iPhone weather app is telling me that at just about the time that the moon will be above the trees and in a perfect position to be photographed…….we have a 75% chance of rain falling.

But you KNOW I am going to have all my camera equipment at the ready just in case.