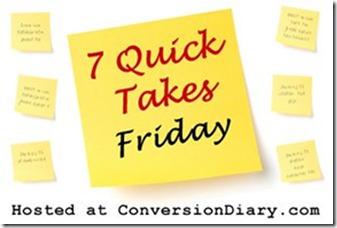 I don’t think that it has escaped anyone’s notice that Shoe Queen is getting married today. And because of that…..

These are really rather weak and unprepared Quick Takes. I had hoped to have them all prepared before hand so that I could just hit “post” this morning and check it off the to do list.

A vain hope as is obvious.

You know the rules. Ingest your weekly dose of blather like a good person and then click on the link above to be whisked, at the speed of the approaching wedding, over to Conversion Diary.

1.
The house is stuffed to the gills with people. And we have been playing musical beds….in only the most appropriate ways thankyouverymuch!

Slim Jim was in the basement for three nights. Then he was in Shoe Queen’s room for one night and SHE was in the basement with all her bridesmaids. And then Slim Jim moved to the hotel and I quickly washed the sheets on the basement hide-a-bed because that is where Cartoon Girl’s boyfriend…I need a name for him darn it….is staying. OK, he will be TNG for the time being – The Nameless Guy. His name is actually John but you know I cannot leave it at that.

Oh yes. So TNG stayed in the basement last night but will be moving up to Shoe Queen’s room tonight and tomorrow night.

I need a glass of wine.

2.
Cartoon Girl’s boyfriend had his flight cancelled and didn’t get into the airport until 12:40a…this morning. The rental car place closes at midnight so HHBL and Cartoon Girl drove to Akron-Canton and picked him up.

3.
We partied and had wine until late last night. I had Pretzel Crusted Trout.

Let that sink in.

Oh my word and all the saints in heaven it was good.

Everyone was served a Chocolate Bombe.

4.
It is currently misting outside and we had a BOAT LOAD of rain yesterday so there is some nervousness resident here at Chez Knit since the wedding is OUTSIDE. It was really rather wet in the grass last night at the rehearsal.

And when I say really rather wet I mean that in places where people might have to walk there were standing puddles.

5.
Thank goodness I have an extra refrigerator because we would be up the creek without a paddle without it.

Currently the extra frig in the garage is holding, in no particular order of importance….

6.
I am wearing flip flops with my MOB dress.

Oh fine! They are fancy flip flops with a cute little flower on them. But that is what they are. I decided, after the whole Shoes of Eventual Phalanges Death that I wore at TMO’s wedding I went for comfort this time.

And Mombie (the MoG) is also wearing little flip floppy sandals. We came to that decision independently.

See that is what we like about each other. We think alike.