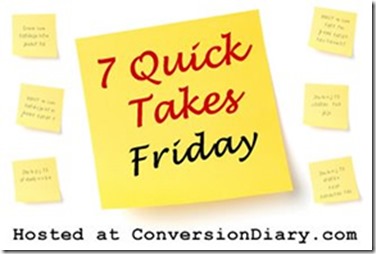 Welcome from Crazytown where we are still swimming in boxes although we have finally made it to the shallow end of the box pool.

Even though it is a holiday weekend the rules still apply. When you are done rolling in the revelator blather you need to click on the picture above to be whisked, at the speed of the biohazard team pulling up to my door (see #2), over to Conversion Diary to see what everyone else is up to.

Blather produced as a labor of love.

1.
I had the chance to stop by OCK this week to pick up a couple of things that were left there. It isn’t as if we can actually USE the Invisible Fence apparatus here at Chez Knit Deux. But we paid a boat load of money for the thing when we installed it 12 years ago and we might need it again some time in the future (and by then it will be out dated) and really, we just didn’t want to leave it stuck to the wall in the garage. How unsightly! So I went over and disconnected it and left just the wires hanging there. It looked like something out of “How the Grinch Stole Christmas”!!

And I had a chance to talk to the new owners (or at least the wife part) and she actually took me around in the house. Man it was REALLY strange to see someone else’s furniture in the spaces that we inhabited.

And I didn’t feel one qualm or pang of regret that OCK was no longer our home.

And Nichol’s MiL was there washing the windows and cleaning the grooves with a TOOTHBRUSH.

You can bet your life I never did that.

2.
There are piles of boxes here, stacks of furniture there. That is what you might expect when you move. And on Tuesday I just couldn’t stand anymore coming down to my work area in the basement and seeing the chaos that reigned on the other side of the “finished” portion of the basement. Furniture all in disarray, stacks of boxes. And so I figured I would just put some order into that space.

And as I did I had occasion to move a set of shelves that had been set down by the movers against a wall. I moved those and I set about moving a stack of boxes. And that is when I discovered it…… 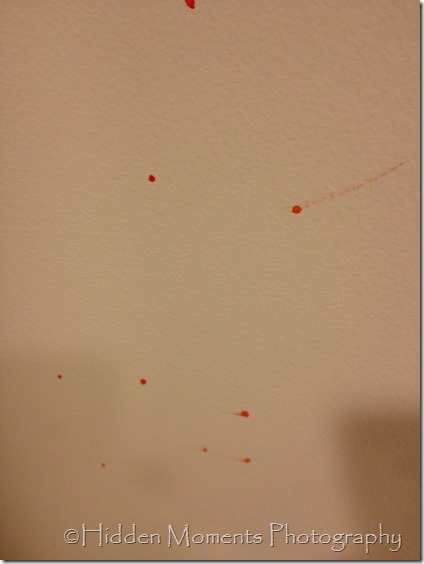 At first I thought that somehow I had missed red paint splatters on the wall. But I am pretty observant about that kind of stuff. And as I came closer I realized that it was blood splattered along the wall.

Folks it looked like a crime scene. And the reason why I hadn’t noticed it before was because the movers had kindly placed a piece of furniture in front of it. How convenient considering it would have been the movers who actually bled on my wall in the first place.

I took pictures to document. I cleaned the wall as best I could (it is now stained). And then I called the moving company to report it. The fellow in the office was rather nonchalant about it and said that he would get back to me the next day, after he talked with his “guys” who were out on a job.

And I didn’t hear back on Wednesday.

And I didn’t hear back on Thursday.

So I have sent an email. Not flaming but stern. I come from a tradition of deadly email writing skills.

And I put Big Red in front of the splatter so I don’t have to look at it every time I go by that wall.

3.
Yesterday I finally managed to find the time to check out the library in my new town. It is smaller that what I am used to but still really nice. And there are some things that I am really going to like.

When you request a book and it comes in you can go and find it in the “requests” shelves and then go through the self check out lines. I LOVE this. For all the awesomeness of the Twinsburg library you still have to go up to the check out desk, ask them to find your book, wait and then have them check you out.

The smallness of the library itself and therefore the smaller number of books really isn’t an issue as that branch is part of a much larger library system and it is very easy to request books from any other branch and have them sent to Brecksville.

Just another reason why I love the Frozen Northeast Ohio.

Well all except for January and possibly February.

Now if I could just find some time to read.

4.
I am still getting some produce from the community garden because LL is such a nice gardening partner. But let’s be honest about this….

I pretty much abandoned her, and the garden, in June when it became obvious that we would be dealing with a move as well as a wedding. I have a lot of energy but not that much. And in my mind I really consigned all the produce to her after that point because I have not put one little lick of work in out there.

And we all know that it is a lot of work.

But she still sends me produce. Enough beets that I canned five pints of pickled beets yesterday and two quarts of Bread and Butter pickles. And HHBL won’t eat either of those things so MORE FOR ME!!

But I also produce all the pizza sauce and tomato sauce that we use around here over the course of a year. Last year was a BUMPER year for tomatoes. But not so much this year for me. So yesterday….

I picked up a bushel of Roma tomatoes from my favorite produce stand. She didn’t have any when I stopped by on Monday but I gave her my name and told her that I wanted 4 pecks (which equals one bushel) and would she hold some for me if she got any. And she did.

They aren’t quite ripe enough for canning yet. I think they will need to sit until Tuesday or so. I guess that next week I will be making pizza sauce, tomato sauce and who knows what else.

5.
Well, I discovered this week that our dishwasher is not working. That wasn’t a pleasant thing. At first I thought that I had just not loaded the soap in the dispenser correctly, although that isn’t rocket science. But then it became apparent that it wasn’t my fault, that really it was that the dish washer was malfunctioning.

I do not mind doing dishes actually. I find it rather soothing.

But not during canning season.

There is, however, a home warranty for Chez Knit Deux and I am waiting for a call from the appliance repair company so that we can see if it is fixable. Our realtor keeps telling me not to say anything about our having a home inspection as that might classify a non-working dishwasher as a “pre-existing” condition which the warranty company wouldn’t cover. I won’t mention it but if asked I am not going to lie and say we didn’t have an inspection.

Don’t Ask, Don’t Tell. It covers both gays in the military and home warranties. Who knew!

For now, however, I am washing dishes.

6.
Next to the front step at Chez Knit Deux there is a rather large hydrangea bush. 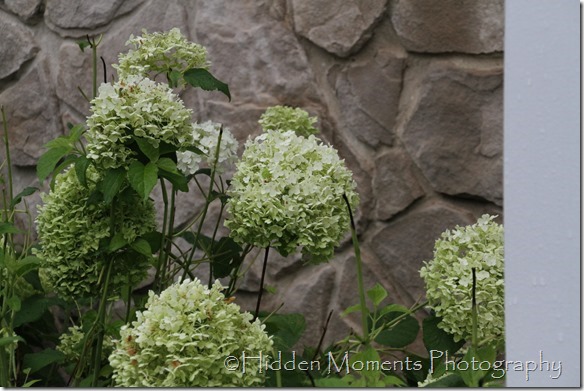 I love hydrangea bushes. But mine looks rather spindly and like the landscaping company had, for some unaccountable reason, decided to trim it back…..badly. I couldn’t figure out why they would have done that to my bushes but not to some of the other, rather spectacular looking, hydrangea bushes in other parts of the development. See all those spindly, ugly stalks? Not good. I almost went out and enquired of the landscape crew earlier in the week but then forgot to do it. 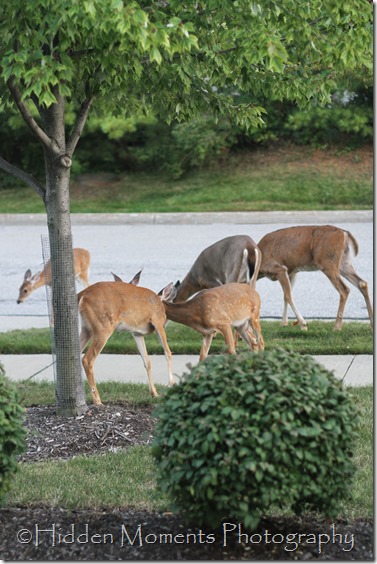 Even here, in the middle of Brecksville, I cannot escape the four footed marauders from the woods deer. There are five in this picture and that doesn’t include that two that you cannot see outside the frame. Folks, they came right up to my door, looked in the window for the LOVE OF PETER, PAUL and MARY, and then munched on the bushes! That is how we knew they were there because they were looking in the window and munching on the hydrangea and Max just about lost it.

I guess I shouldn’t have left the stinky deer spray for the new owners of OCK. Now I have to go and buy some to spray on my hydrangea bushes.

7.
I bought yarn this week.

I KNOW, I KNOW!! Just what I need is more yarn.

I am about to start a big project and I had all the yarn that I needed for it but…..when I bought the yarn for this particular project, about 18 months ago, KnitPicks had discontinued one of the colors that was needed. So I substituted. But when I got the yarn out this week to start the actual prep for it I realized that the color of that one skein just wasn’t blue enough.

But you see the thing is that if your order is over $50 you don’t pay shipping and handling. And I only had one skein to order. I could have (should have) sent out a Rav post to my Knit Sibs asking if anyone needed to order anything. We often combine orders. But then I got to thinking about fall and sweater knitting and Knit Picks Wool of the Andes…..

And I ordered enough wool for a sweater. As well as the ONE skein that I needed for Nonna’s Garden Shawl.

But I can hardly wait to cast on for my red sweater.

Bonus!
You know what Monday is?