What Is That Puddle?

Oh Maxie Poodles (who actually has no poodle DNA in him).

My poor puppy (who is actually 10 years old).

If you will recall Max had to go to the vet last week because I am a Bad Dog Momma and let him suffer forever.

He is still working on forgiving me.

Part of my conversation with Dr. Jerry went something like this….

Dr. Jerry: Has Max been drinking more water than usual?

Me: Well he does seem to be a bit more thirsty. I have to assume that it is because he is dehydrated from all of the phlegm that he is snotting out onto my floor.

Dr. Jerry: Well, just so that you know. While Max is bulking up on the steroid in anticipation of playing pro ball he might have to go out more.

Me (in a vague voice that meant I wasn’t REALLY listening): Uh, OK.

I should have been listening more closely. I would have saved myself some issues.

Because my poor puppy appears to be incontinent at the moment. Or at least has some “urgency” issues. This is the dog that has a bladder of iron the size of a barge. He can go 12 hours without going out if he has to.

He hasn’t peed in the house since three weeks after we brought him home as a puppy when all of a sudden the light went on in his head and he figured out that if he stood at the back door and looked at it and then at me that I would take him out.

He NEVER has an accident.

Until this week that is. And since the weekend he has had not one, not two but THREE accidents in the house. And I have managed to step in each and every one of them. AND he wet the bed, his bed not mine. He doesn’t get up on our beds.

There was the incident with the landing on the stairs…..

Hey honey? Did you spill some water from your cup when you were coming down the stairs this morning? There is a wet spot here and I just stepped in it and……hey, this smells like dog pee!!!

Notice I am trying to say pee as many times as possible in this post. I apologize.

Then there was the small puddle in the back hallway that I stepped in.

And then there was the rather larger puddle located on the tile floor in the laundry room, strategically located right in front of the washing machine, that I managed to step into this morning.

Hey, why does my slipper feel wet all of a sudden? 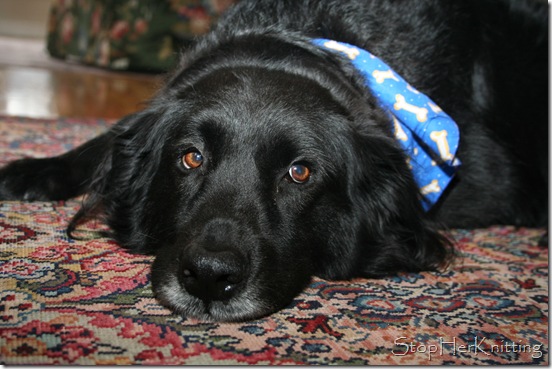 I am sorry Alpha Male. I just couldn’t hold it any longer.

So HHBL and I am going to HAVE to remember to let him out before we go to bed.

It just isn’t a really good way to start the day when you step in a puddle of unknown origin.