I Am A Bad Dog Mommy

The above title says it all.

I might have mentioned before that Max hasn’t been his usual bubbly doggie self. He has had the sniffles.

Hmmmm, that might not be quite the right way to describe it come to think of it.

Yes, Max the Wonder Dog seemed to have a cold. It came on slowly. I think I might not have noticed it right at first. But when he started to sneeze a bit and had a runny nose then I knew.

A cold. Great. He had one of these in November and at that time I took him to see Dr. Jerry who, along with Dr. Jeff are his favorite veterinary people. Both of those guys look like they  are about 12 years old but hey, they seem to know what they doing. I love the vets and all the people at Twinsburg Veterinary Hospital for so many reasons not all of which can be written here. But let me just say that they are awesome.

At any rate, Dr. Jerry listened to his hairy chest, looked in his runny, snocky nose and said,

He has a cold. He should get better fairly quickly. It’s good to see you. That will be $125.

A very expensive way to find out that it is just a head cold thankyouverymuch.

And so, when he started with the sneezing and runny nose etc. I just figured another cold. It is winter after all.

And lots of time spent cleaning my floor of all the absolutely disgusting stuff he was snocking out. You would think he was full of Bubotuber puss. Sorry, Harry Potter dominates at the moment.

But this time he didn’t get better after 10 days or so. Oh no. The basic runny nose seemed to morph into other things and then he started having this amazing barky cough in which he would do a pretty good imitation of someone trying to hack up a lung.

And to add insult to injury he would definitely hack stuff up and then, before I could get there with paper towel to clean it up….

He had taken care of it himself.

You know, I feel a bit queasy at the moment for some reason. 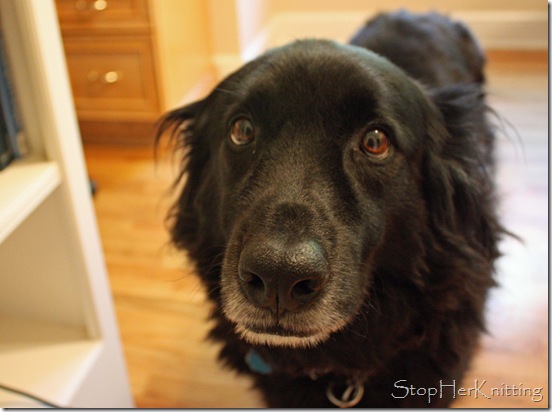 And then, over the weekend, he seemed to perk up a bit. And I thought we had finally turned the corner on this thing. He was still coughing and sneezing and wheezing but he seemed to be doing that a bit less.

Maybe it was just the fact that he had discovered his Mini Me and was busy courtesy sniffing every chance that he got.

But then we arrived home and…..not so good.

So finally, this morning, I realized that I had to take him back to see Dr. Jerry. Darn it! Just what I wanted to do, on a morning when I woke up to 4 inches of snow on the ground, was to go to the vet and have them tell me that it was just a cold. Rats. But I called, they said come it at 9:30a and so we went.

Me: No he hasn’t. This has been hanging on, um, for a while and I thought I should bring him in

insert nervous laughter and fast talking here to cover me actually having to tell him how long Max has been sick.

Me: So Dr. Jerry, how long do you think that this cold is going to last?

Dr. Jerry: You know, I hear some crackling in his chest. I would like to do an xray.

Me: Do you think this is going to…..did you say chest xray?

And so they took Max back into the inner sanctum and I went out to sit in the lobby and try to avoid being thoroughly sniffed by a VERY large Doberman. Very. Large.

Finally I got the call to come back and talk to the doc.

Dr. Jerry: Well, he has bronchitis. And I feel confident that there is a bacterial component to it.

“Bacterial component” is, I believe, vet speak for “you are an idiot dog owner and you should have brought him in at the first sniffle so we could have treated it right away. Now it is going to cost you SO much more. And thank you, in advance, for putting my oldest child through college and medical school.”

Dr. Jerry: Max will need to take a steroid for three weeks and I would like to put him on an antibiotic for four weeks. It has been very nice to see you and that will be $250 please.

And so, for the next month or so this will be our life… 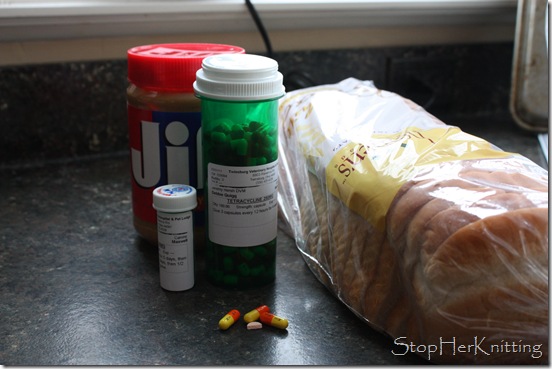 That is A LOT of pills there. Three antibiotic pills twice a day plus half a steroid pill twice a day at the moment. I went and bought the dog his own loaf of bread to get through all those pills.

Of course Max thinks that he has landed in doggy heaven cuz he gets to have bread and peanut butter twice a day.

And I am relegated to being a bad, bad dog mommy.