Well Thanksgiving has come and gone. The turkey, or in our case turkeys, have been consumed. We are back home at Chez Knit where I am thinking about getting the Christmas decorations out of the basement. But before I can do that I have to tell you about Thanksgiving.

I know that you have been haunting your computers waiting for the details. And the talk about the food. And the pictures.

And boy are there going to be a lot of pictures. I should apologize now, I really should. I am sure that this is going to be like going to someone’s house and having them tell you that after dinner everyone is going to watch their slides from their latest vacation to Toledo.

We took a vacation to Toledo once. No really we did. I will tell you about it some time.

So HHBL and I trekked out to The Cottage for the Thanksgiving extravaganza. And who should we see when we rolled in the door………. 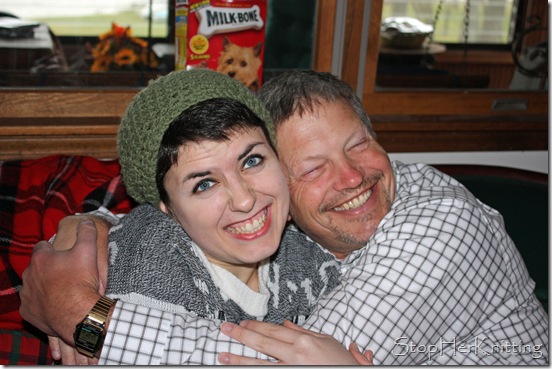 Mimi and Papa flew her out from NYC so that she wouldn’t miss all the fun. And The Chef knew all about it and didn’t tell me!! So sneaky. And a very nice birthday present for HHBL. Thanks Parental Units!!

We were overrun with family I can tell you. I think there were 25 for most meals. We were running a restaurant! A restaurant which never ran out of food. We had enough food to feed a third world country and still have leftovers. 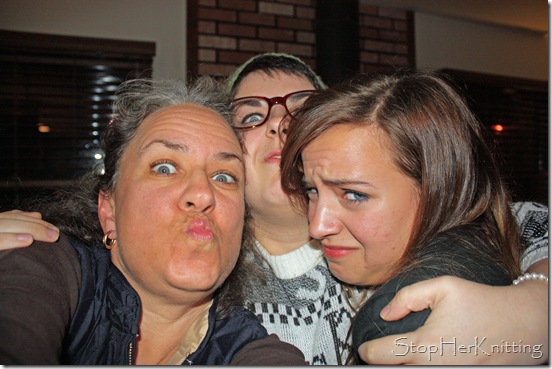 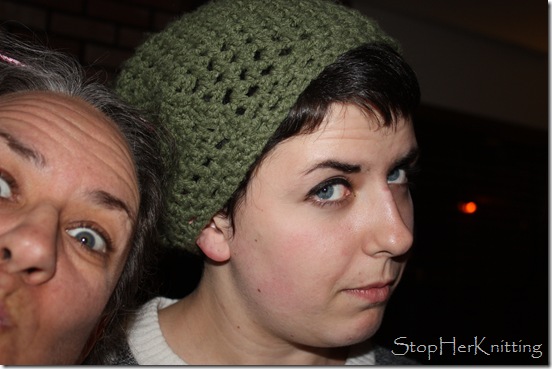 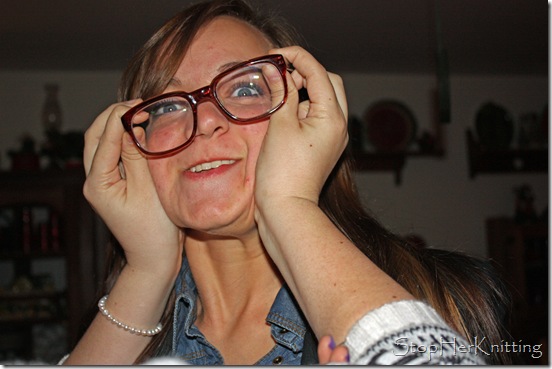 We had to spend some time taking silly pictures of ourselves because that is what we do.

We spent time visiting with family that we don’t see all that often. The last time that most of us were together was last year at Auntie Jane’s memorial. 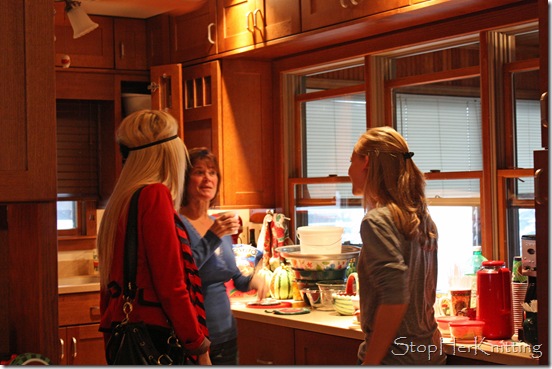 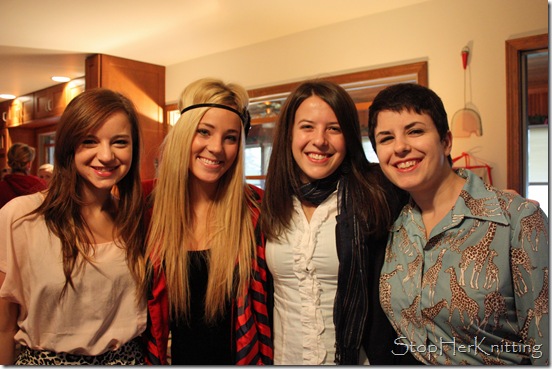 The progeny and their cousin Arin, daughter of Pilot Man and The Chef. 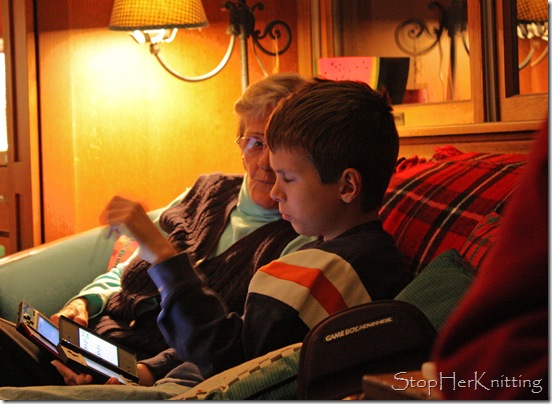 Dylan, age 10, showing Grandma Agnes, age I have no idea, how to work the PSP. THAT was fun to watch. Dylan finally gave up and just played both games and Agnes watched. 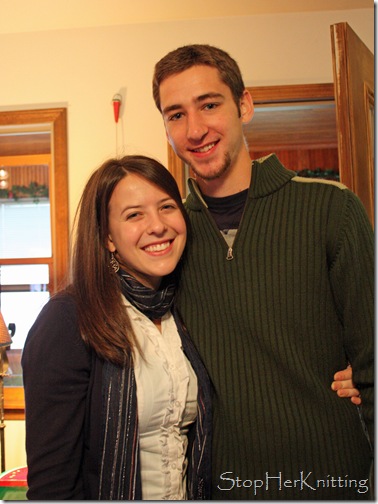 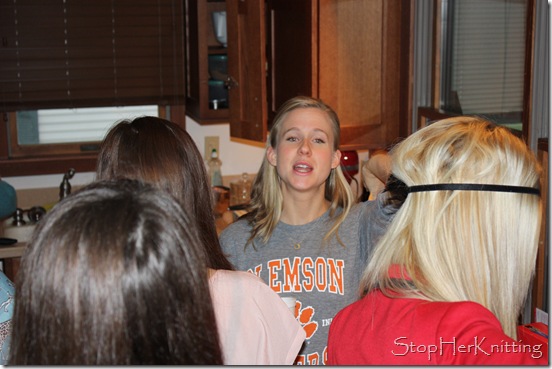 Amanda, AKA Aunt Poopie, directing the troops. I think we ran her over. 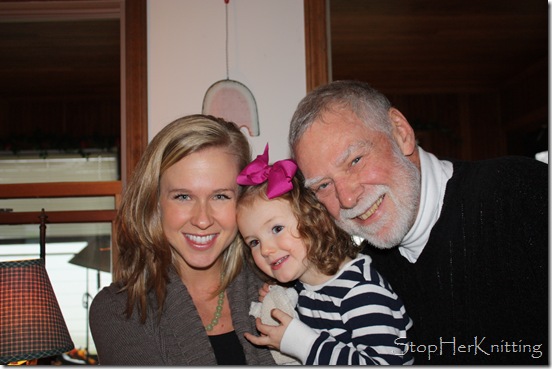 Auntie Poo, Carli and Papa. Oh Carli you are so cute. You too Auntie Poo. 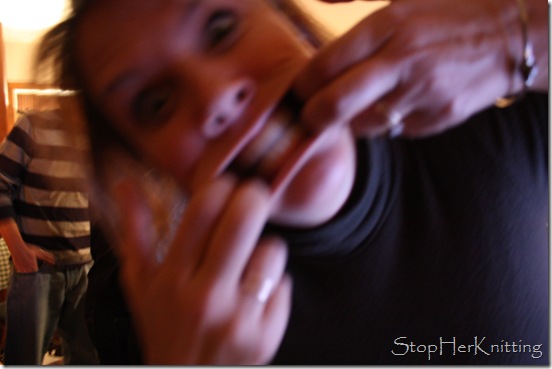 There is one in every crowd. This would be my cousin Heather. I love her so. I miss her. There is a Heather sized hole in my life.

There were younger cousins who spent two days just running around inside and out. 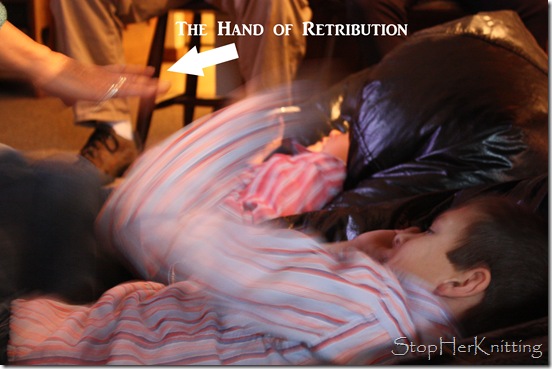 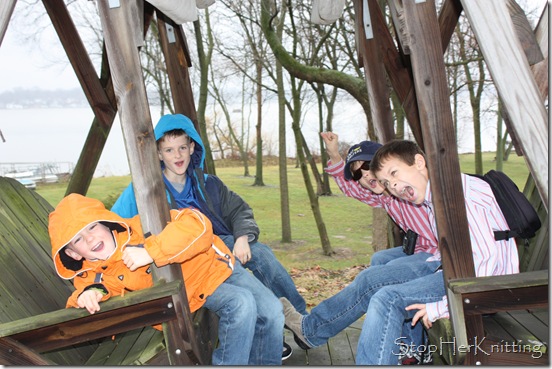 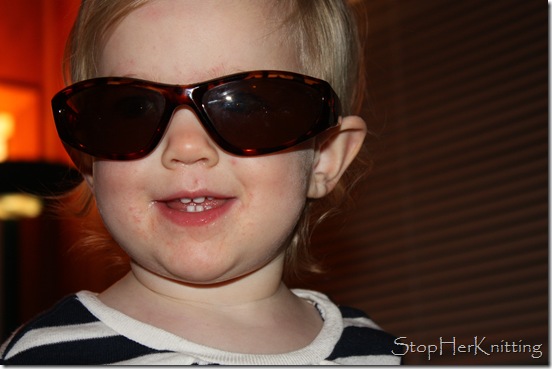 I wear my sunglasses at night! 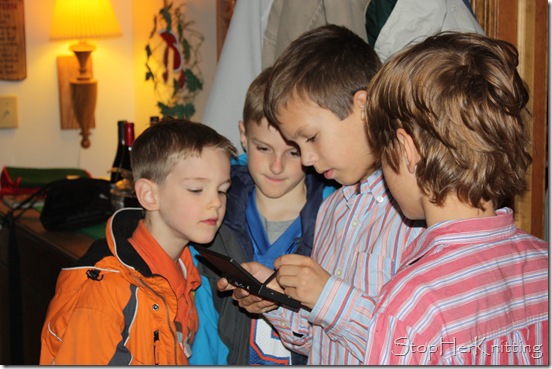 So if you push this button it blows up the toilet in the basement! Cool!

And then there was the food. We started eating Wednesday evening and we didn’t really stop until we all went home on Friday afternoon. It was an Eatapalooza of the largest magnitude.

We had not one but TWO turkeys. I at first spelled “turdkey”. That came later.

So, we had two turkeys, both prepared by Pilot Man. He flies! He farms! He cooks! 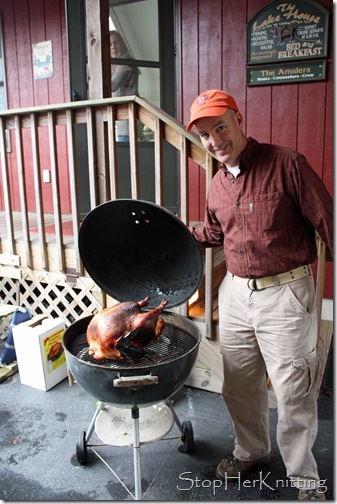 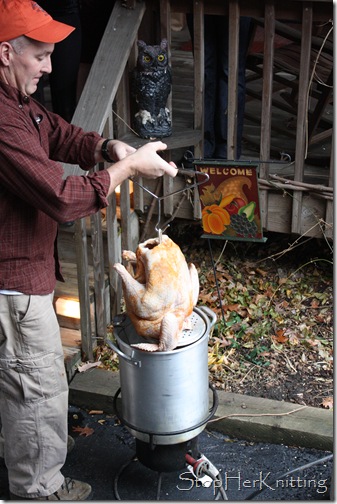 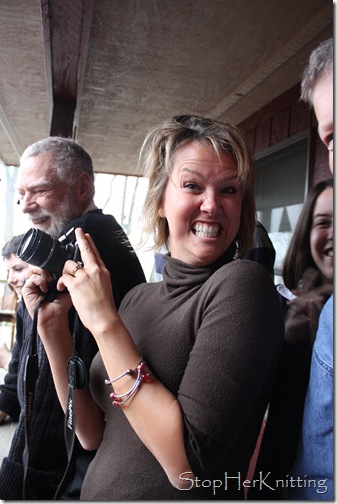 Watching the turkey go into the fryer was like looking at the Mona Lisa, there were a bazillion cameras all snapping pictures.

And because there were turkeys……. 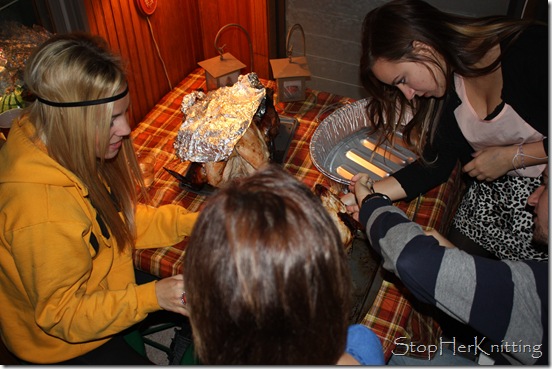 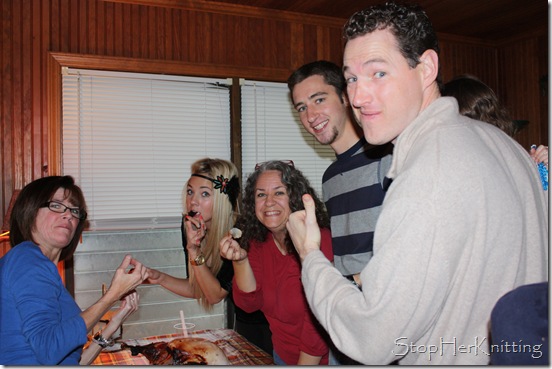 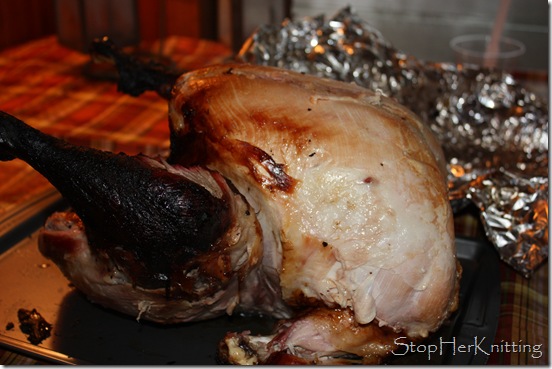 We had those turkeys picked clean faster than African buzzards on a dead elephant. 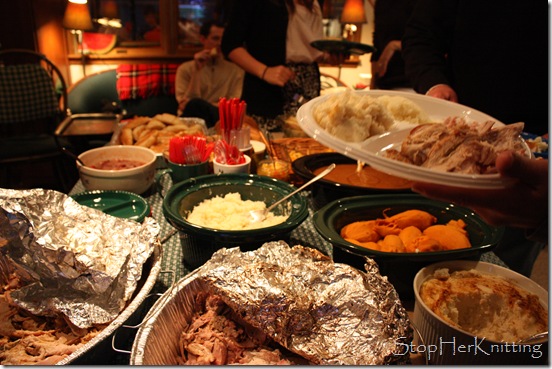 And there was food, food and more food. My stomach hurts just looking at all the food. 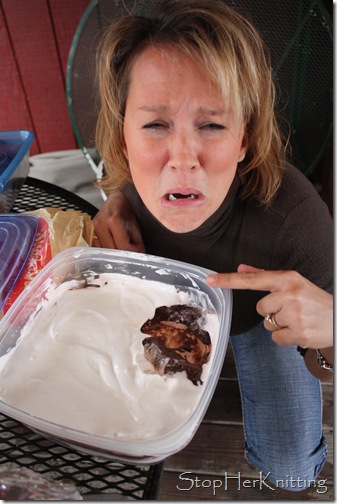 There might have been some mysterious “dessert sampling” going on. 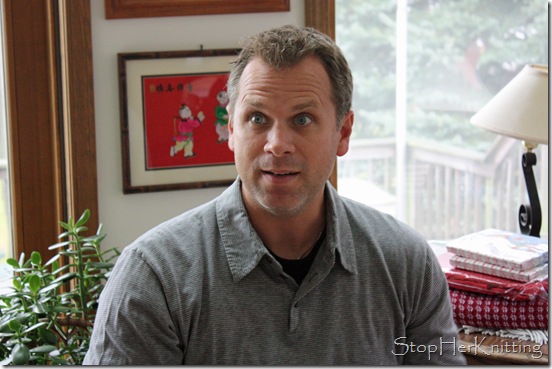 I DID NOT do that!

But over and above all the food and the WINE! and the laughter there was thanks. Or maybe I should say thanksgiving. 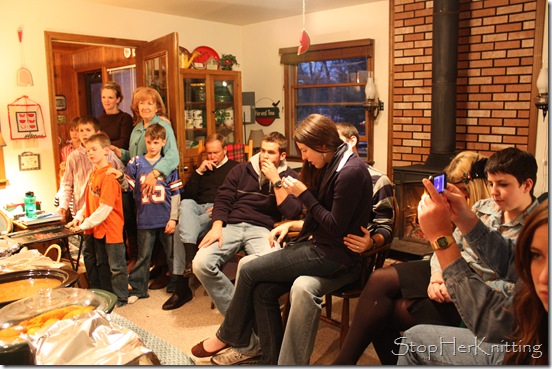 We were thankful that we could all be together to share in being family. In meeting new members of the family and in reconnecting with family that we don’t see all that often. Thanks that we had a warm place to celebrate and more than enough food to fill our bellies. 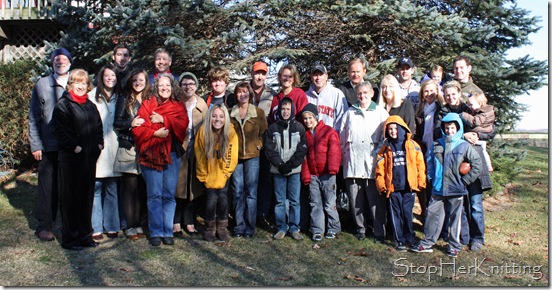 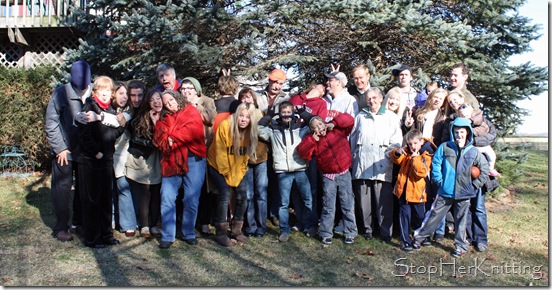 Oh I love my family.