Or why we won’t be having Orange, Raspberry Pecan bread on Thursday.

I was actually going to talk about Florida today. The warmth. The sun. The sand. 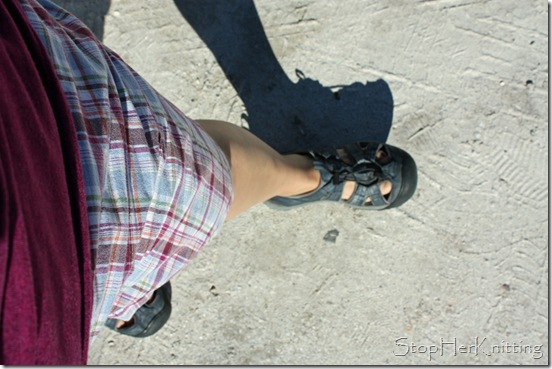 The fact that it is perfectly acceptable to wear an outfit like this on the beach. You will blend right in.

But we aren’t going to talk about those happy times today. Because there is no happiness here at Chez Knit Bakertown.

No, the Baking Dementors have come and sucked all the joy out. It is gone.

And why might you ask? Because I have had an epic baking fail of a recipe that has never failed me before. I sort of feel like I have jumped out of the plane with my trusty parachute only to find that it will not open.

Only with less blood and guts at the end. 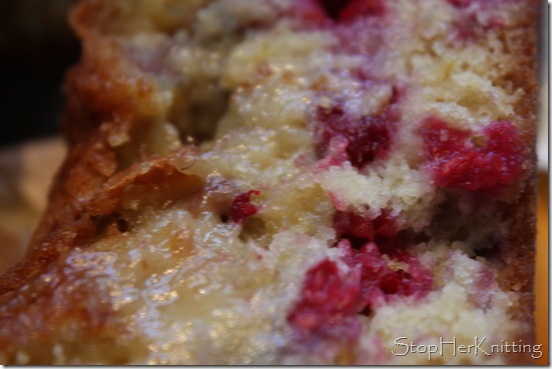 This was my recipe for Orange Raspberry Pecan bread. We would have been having this on Thursday if things had gone better. But we will not be because the whole loaf, minus one small piece, is residing….. 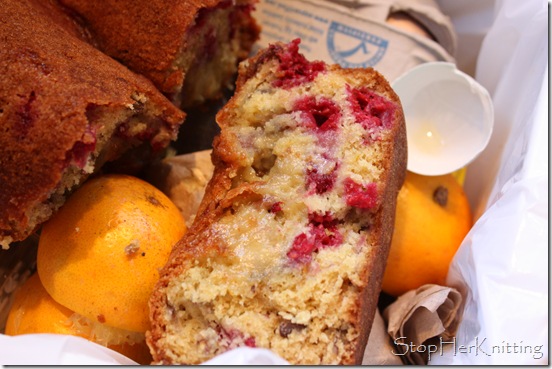 Oh it is painful to look at and to write. But that was the only place for it, believe me.

Such a simple recipe with lovely ingredients like fresh oj, raspberries, pecans, sugar, vanilla. Just the thought of it makes my mouth water. I mixed it up as I always do.  I put it in the loaf pan and baked it in the oven as I always do for the amount of time that is needed.

It smelled done. It looked done. It tested done. So I took it out and put the pan on the stove to cool down. I went away to my office to get some research done for a friend. I walked back into the kitchen later and walked by the loaf pan.

Wait? Is that a lunar crater in the middle of my bread? A sinkhole?

But yes. The middle, the golden brown middle of the loaf, had collapsed like a poorly built Chinese highrise. I stuck my finger into the middle and the batter made a sound sort of like you hear on CSI when the forensic scientists are sticking a probe into a wound.

Sure that is what I said. Why are you looking at me with doubt in your eyes. Just because the dog quietly got up and slunk into his cage after I found the bread debacle doesn’t mean anything.

Maybe I can save it I muttered to myself. It cannot be THAT bad. I will just cut out the middle. Yes! I will “pre-slice” it for Thursday and no one will ever know. And I will just test this little piece right here to be sure that it tastes OK.

And that was just the Fail! icing on the baking cake because, for some unexplained reason, the loaf didn’t taste good. It had a funky taste that I just can’t put my finger on. So there was no saving it. Into the garbage it went.

Tears. Gnashing of teeth. Wailing. The putting on of sack cloth and ashes.

I might have been reading too much Old Testament lately.

Thank goodness I had a loaf of banana bread in the freezer.

But it just isn’t the same.