Oh man I did it again.

I swore, after the last time, that I wouldn’t do a midnight show for any movie ever again. It is too hard on my creaky 50 year young body. And I don’t do midnight well.

Really, I needed to see Harry Potter and the Deathly Hollows at midnight to keep up the tradition. Even though TMO and Shoe Queen were not with me this time it is still tradition. But I have found others who belong to the cult are willing to go to the midnight show.

It is those crazy ladies who play with pointy sticks.

Are you surprised about this? How long have you been hanging around here?

And we couldn’t just GO to the movies. Oh no we had to have costumes of various kinds. Some of us just stuck to the basics and had a Gryffindor scarf and Gryffindor socks. 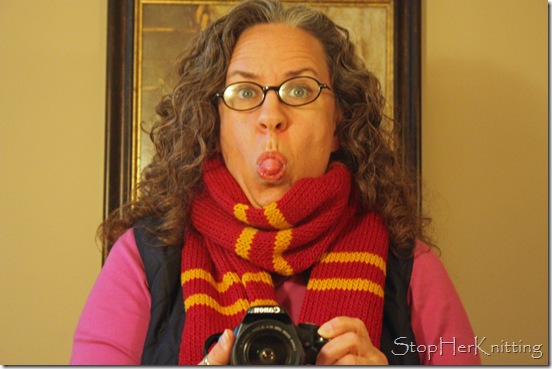 I forgot to take a picture of the socks. But they are lovely and warm.

And then there were others who put in a tad more obsessive work thought into what they were wearing. I continue to maintain that I was the voice of reason in this. 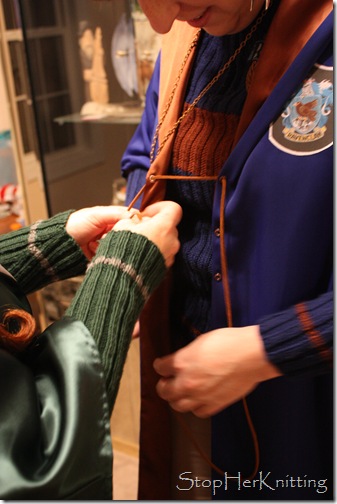 Bonnie and Erica both had Quidditch sweaters on that they knit over the last few months. Hours and hours and hours of 2x2 ribbing. But the sweaters are beautiful and really, really warm. 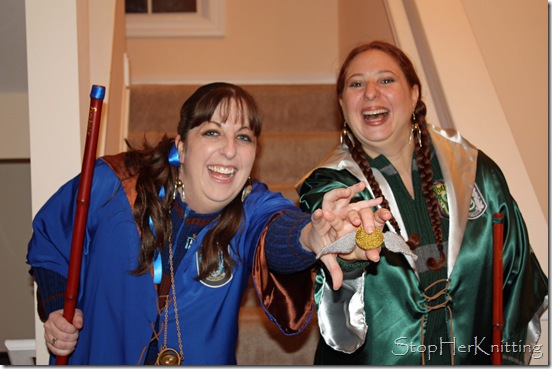 And there might have been snitches and time turners and Quidditch robes and brooms involved in this whole caper.

The snitch that Erica knit was absolutely wicked. 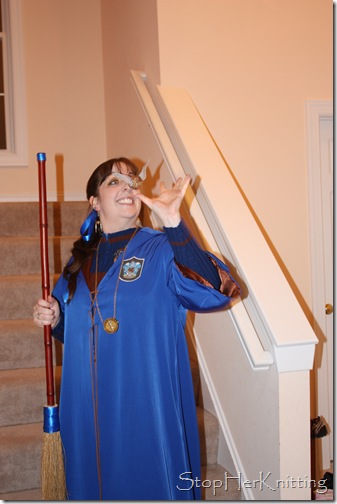 And when we were finally all dressed it was into the cars and over to the local Chipoltle for dinner and pre HP7 talk and speculations. Actually there were less speculations than there might have been because Erika had actually been to a preview of Tuesday night.

And then, for a midnight show we got to the theater at……..

And we were not the first ones in line if you can believe it. 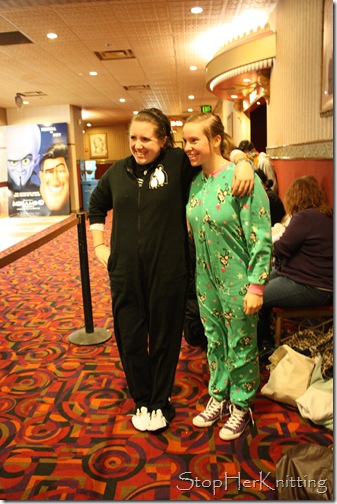 These young ladies were there before us and in their “jammies”. Hilarious. 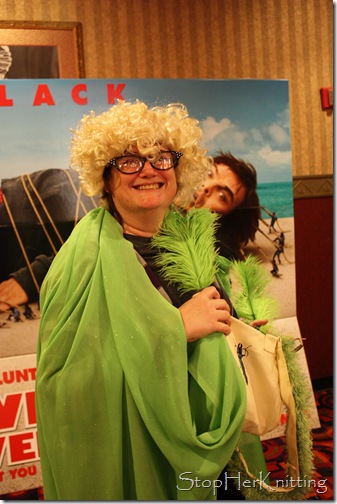 We spent some time getting Norma all decked out as Rita Skeeter. She was fabulous as Rita. Just fabulous. 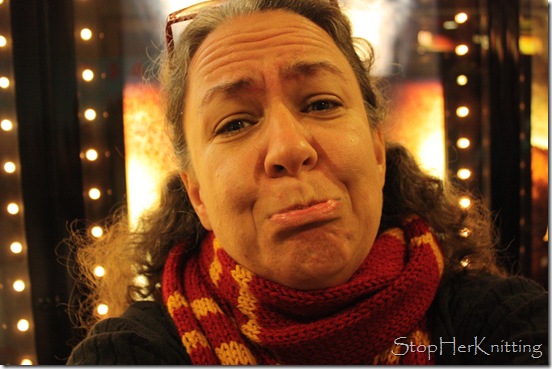 There are so many hours to go…..what am I going to do with all this time. 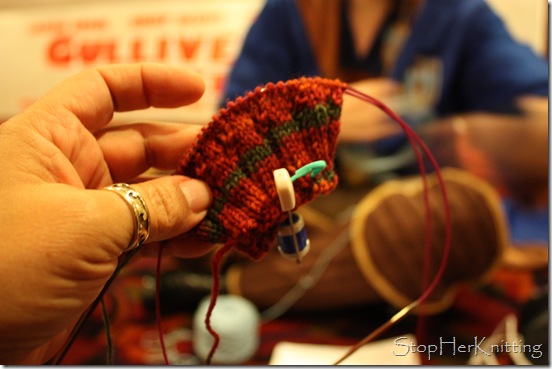 Knit Horcrux Socks of course. These are going to be so awesome when they are done! 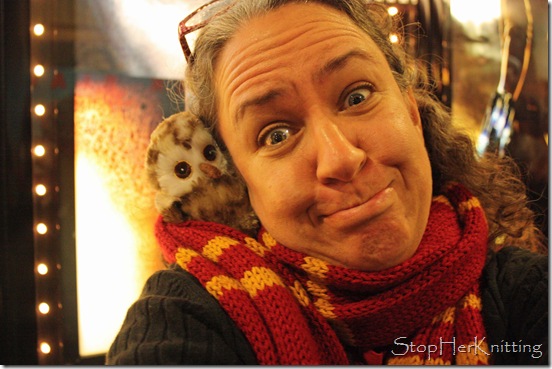 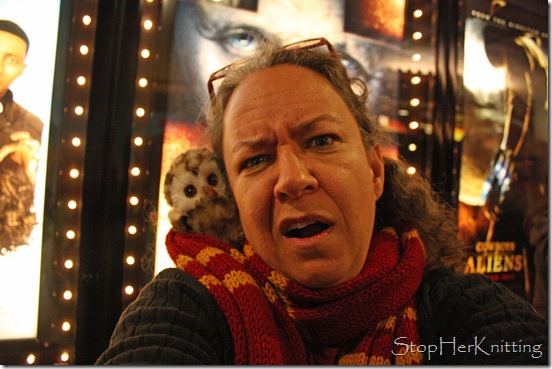 What do you mean I have to wait until 9:30p to go in and sit down in the theater. I have been sitting on the floor for an hour and I can’t feel my big bahookie. 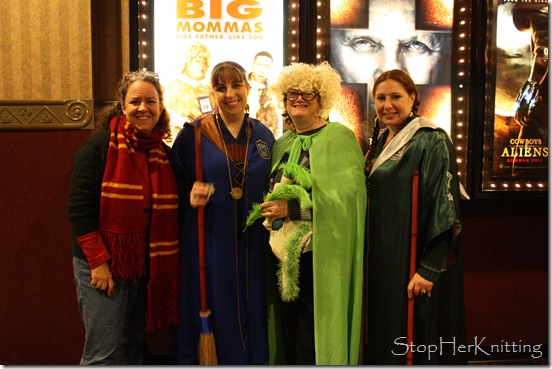 We are smiling because they had told us that they would let us go in and sit down in the theater at about 9:30p. At least that was a bit more comfy.

And just as an aside. Can you explain to me why anyone would think that if they showed up for the midnight show of HP7 at about 11:30p that they would think that there would be any seats together. Wake up and smell the Butter Beer folks. You are going to be sitting here and there and everywhere but not together.

But I love to see people come strolling around the corner into the theater and just stand there and look at all the people that are already there, amazement etched on their faces.

I am not a nice person. I admit it. But you have to get the laughs where you can folks. 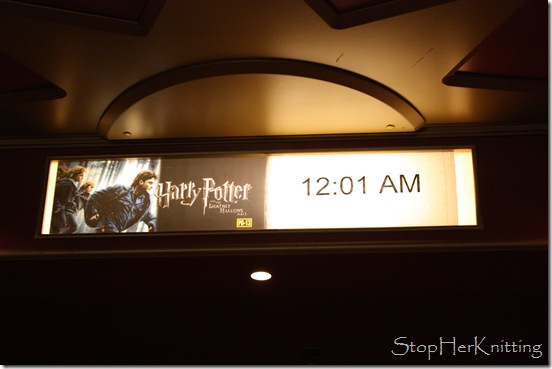 But finally it was time, the lights dimmed, we had to sit through ads (GRRRRRR) and several previews before the movie started.

And I want to go back as soon as possible.

And yes, I will go to the midnight show.

But I am done with them after that.