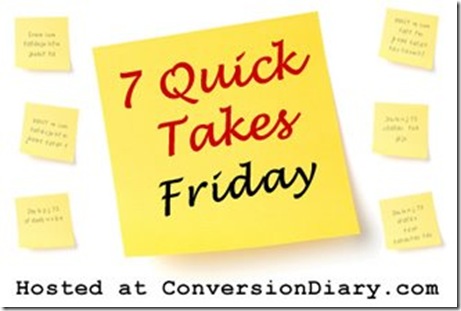 Egads, where does the time go?? How can it be Friday again? The days just fly by.
1.
Sometimes I just have a crazy idea and I have to go with it. I am a force that can’t be stopped. Until that is I dash myself on the rocks of my own craziness.

So I have purchased the MOBD. It is wonderful. But then I decided that I needed some sort of wrap to go with it. And, well, I just have to knit one.
Yes, I know that the wedding is 5 weeks away. I didn’t say that the idea was a particularly sound one. And it might not work out just as I am hoping that it will but I am going to give it the old Knitters try (that is like the old college try only with pointy sticks). I have the yarn, one that I have used before, Berrocco Ultra Alpaca Fine and I have the pattern and I have cast on.
Now, to quote Brenda Dayne, I need to knit like the wind.
2.
Guess who was back with his harem yesterday morning? You bet, it was Mr. Tom and his women. I got an early morning call from LookLeap who wanted to let me know that the turkeys were crossing the road from her side of the street to mine and that they would be passing through the woods shortly. So I grabbed the old camera and out I went. And sure enough there they were. 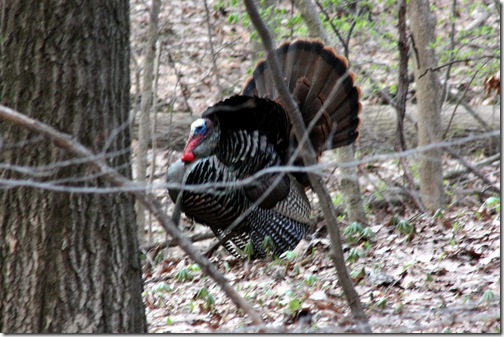 They seem to show up about the same time in the morning so I will start looking for them. Man is he ugly.
3.
After watching Mr. Tom and his women progress down farther into the woods I turned around and there were the first violets of the season. 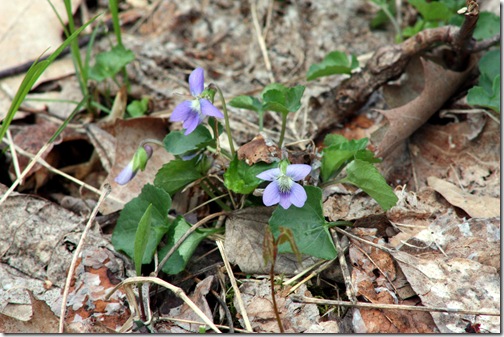 I have a love/hate relationship with violets. I love to see them in their “natural habitat” which is the woods. I do not like to see them in their unnatural habitat which is my flower beds. These things can spread like wildfire and I have spent the last 10 years pulling them out of my flower beds. But I like to see them in the woods.
4.
And then I had to take a picture of the back of the house because, well, because I could I guess. And about the time I was taking the picture I realized that, hmmmm, I had forgotten to paint one of the sides of the shed. 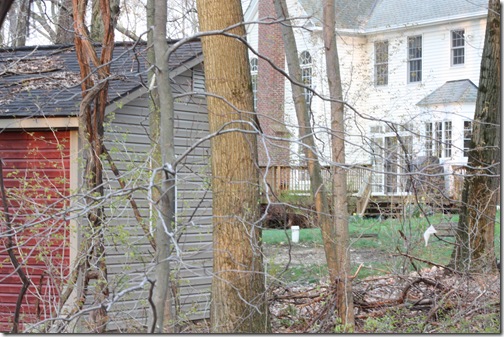 The shed started out that tan color but it didn’t inspire me so I painted the walls red. Only I seem to have gotten 3/4 of the way around and either run out of steam or got called away or something….
And I probably should fess up that I think I painted the shed in 2002. Oops.
5.
Since we were discussing knitting up in #1 I thought I would show you what I have been working on up to today when all work shall cease on all WIP’s (works in progress) so that I can work on Deb’s Shawl of Great Idiocy (that is just a working title mind you). 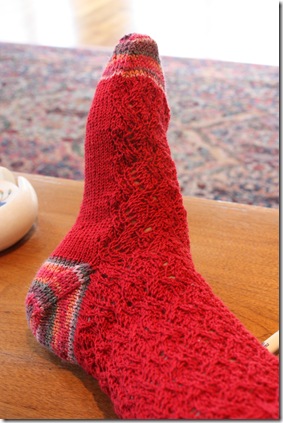 These are my “Sparkly Toes” socks. I wanted to try an “afterthought” heel and I had this yarn that Cindy had given me and so here they are. The pattern is actually just “Grapevine” by Charlene Schurch. I just modified the heels. They haven’t been washed yet so they look slightly funny but they feel wonderful. The second sock is cast on but must now wait for a bit to be finished.
6.
I learned yesterday that my most favorite college professor at Baylor has passed away at the age of 88. Dr. Reid was one of those teachers that makes an indelible impression. I can still hear his voice even though it has been 30 many years since I sat in a class of his. He made history absolutely live and I never missed a class. The thing that was amazing to me was that he knew all of our names, every single one. And at the time he was my professor he was also the head of the department. He will be missed.
7.
And I have had such a boring week that I really don’t have a #7. Usually I keep track of what I want to talk about as the week progresses but this week just snuck up on me. How do you do your 7 Quick Takes (if you participate). Do you keep a list? Do you just sit down and bang out seven of them all at one sitting. Tell me please!!!
Posted by Debbie at 5:34 AM