I had great plans for blogging this week. An entire list of things to talk about. A recipe to share.

But the contagion still rages here at Chez Knit. HHBL and I are making progress. He still has a cough but it isn’t so overwhelming. The antibiotics seem to have taken care of the ear infection for him. My fever has finally abated, the cough seems to have lessened a bit and my voice is almost back to normal. I did actually have a modest night’s sleep last night. It wasn’t great but at least I wasn’t out of bed and standing in the living room actively trying to hack up a lung…

Or perhaps an Alien baby.

It is the energy level or lack thereof, that is really messing with me. I don’t think any of us really think about our level of energy and all that we accomplish over the course of the day until that energy level is absent. I am used to just plowing through my day, running up and down stairs, doing stuff. Right now, that is so not happening. I did some errands on Monday and again today and they just wiped me out. Yesterday was a complete rest day sitting in a chair reading or on the couch knitting and watching Hercule Poirot. Well, all except for the 30 minutes Max and I spent in the basement during the tornado warning. Other than that, it was rest. It helped but I am still dragging my substantial posterior around like an anchor.

I did finally get my 4th of July pictures off the Compact Flash card and into the computer. But I only have the mental bandwidth at the moment to edit one of them. 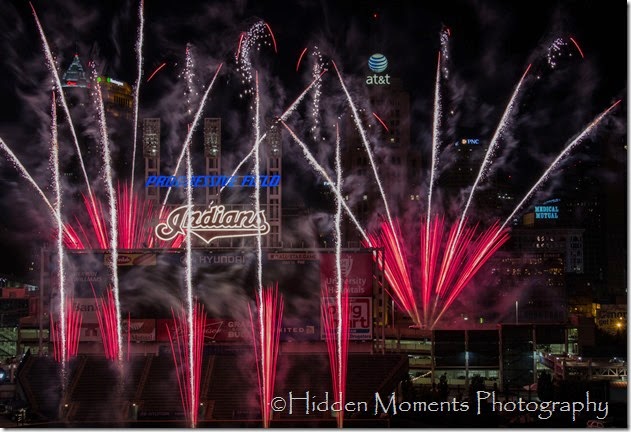 I did bring my smallest, and might I say flimsiest, tripod with me to the Cleveland Indians game on the 4th of July. It took a great deal of fiddling around and repositioning to get the tripod just right and the camera stable while sitting in the top row at the stadium. But I persevered. AND I brought along my newest little “toy” if you will. It is a cable shutter release. This little item, which cost a mere $20, is a boatload of fun and really helps with taking pictures of fireworks, which require several seconds of exposure, on Bulb setting with the lens set to infinity and the camera set to a very low ISO.

Sorry, I lapsed into photospeak there for a moment. I will try not to do it again.

This one isn’t too bad.

Now if the 4th of July would just come around again so I can practice more.

Hopefully by then I will have enough energy.