I love pickles. Have I mentioned that to you lately.

Sweet or sour, it matters not. I love just about anything that is pickled. Brussels sprouts? Bring it on. Cucumbers? I am so there. Chow Chow? Where is my fork. Watermelon rind? Get out of my way while I belly up to the table. Beets? They are all mine.

But there is one kind of pickle that is more than a bit difficult to find around here. Oh, it can be found lurking on grocery store shelves, if you look closely. But here in the Frozen Northeast Ohio people look at you funny when you ask if they carry them.

What are these little spears of sheer bliss?

No, no, don’t run away screaming into the night. Don’t say to yourself, “How can she eat those slimy things??” Be of good cheer and get out the fixings for Bloody Marys.

Pickled okra is a beautiful thing.

I will admit that the first time I tried okra of any sort……I was unimpressed. It was cooked okra that had been what I can only describe as stewed with tomatoes and perhaps onions. Okra, when cut into pieces and then cooked oozes slime. Slime somewhat reminiscent of what happens when I step, ever so gleefully, on a slug.

I sort of feel nauseous all of a sudden……

At any rate, okra oozes slime. That is what makes okra such a wonderful and thickening addition to gumbo. A bit of a roux and a bunch of okra and you are good to go. But to eat okra stewed with tomatoes?

Deep fried okra is another dish that is tasty tasty tasty. I first encountered that particular dish perhaps my second Sunday in college when we finagled a ride to the local Luby’s café. Who would think that people would gladly stand in line for perhaps as long as 60 minutes on a Sunday, in your high heels, in order for little ladies with blue hair in hair nets to shoot you along the line, passing your plate along from one set of hands to the next all the while saying, “Hep you? Hep you? Hep you?” I had no idea what all this Southern food was and I think one of them finally took pity on me and dished me up green beans cooked until almost mush with bacon in them, fried fish, mashed taters and gravy, a biscuit and a dish of these funny little nuggets of something fried. I tried them with trepidation……and the angels sang.

That is pretty much all I thought you could do with okra until one day someone passed a jar under my nose and said, “Eat one of these.” I looked at the contents in horror and very politely declined. Okra could not possibly be made into pickles. But, after some strong arming I acquiesced to tasting one of them…..

Oh my stars and garters and all the saints in heaven. Give me that jar, these are all mine. Who wouldn’t want to eat little fuzzy spears of pickley goodness.

I do try to keep my pickle obsession somewhat in check. Pickles after all are by their very nature….salty. Even the sweet ones have salt in them. The dill pickles that I made two years ago, and of which I have only one jar left, have a saline punch similar to what you might get if you stuck your face in the Dead Sea and took a slurp. They are fabulous. I just made a new batch yesterday, the first of the season. They are now resting safely in the basement where they must stay for at least a month.

I have been slowly if steadily eating away at the last couple of jars of my chowchow. HHBL doesn’t eat “those things” in the frig

Why do I tell you my love of okra pickles? 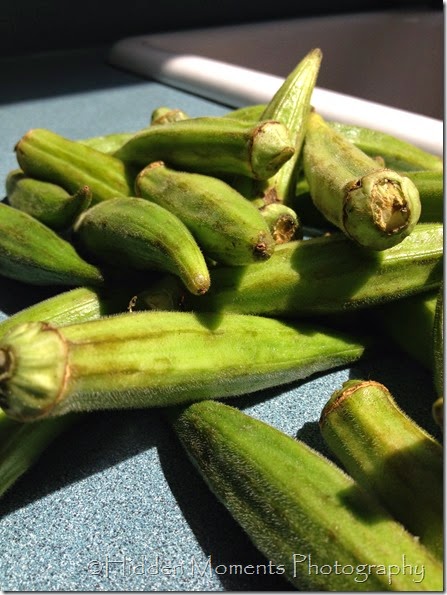 These will be pickles

I made my first ever batch of okra pickles today. Only two pints as it was dastardly difficult to even find okra around here. I went to 5 places before I finally found a small bin of not that particularly fresh okra that I picked over until I found enough to make two pints. They now mush rest and be happy and pickly for a bit. One of the pints didn’t seal. No happy POP! that you hear when the lid snaps down and you know the waterbath has been successful. That’s OK.

That just means that jar will be the first one that I open sometime in the next two weeks. If they taste even half way heavenly delicious I will be making more.

Who wants to make Bloody Mary’s??