I should most likely say that this post has absolutely nothing to do with the crash of MH17. That is a horrific situation that can have no humor attached to it.

This is not about that.

Now that we have gotten that out of the way so that I do not get angry emails…not that I ever do get angry emails, but if I did then this would hopefully forestall that.

Where was I? Oh yes, I remember.

Everyone likes to read about plane crashes don’t they? I cannot be the only one who will sit, with rapt attention, through all the episodes of “Air Disasters”, right?

Fine, I will start with a short story. Many years ago in a house far, far away. Well, not that far away actually but in the scheme of my life it was two houses ago. As I was saying, many years ago when the progeny were little they were not given unlimited access to any kind of screen time. They are old enough that when they were growing up “screen time” meant sitting in front of the TV. We had a computer but no one would have thought that you could use it for anything other than work. Windows hadn’t been invented yet.

I think I rabbit trailed there. Anyhoo…..

The progeny had an hour of TV watching a day. This meant that even if you were in the same room with the TV on but it wasn’t the show you wanted to watch but you just happened to be, inadvertently of course, piggybacking onto your sister’s show but you REALLY weren’t paying attention, HONEST…..your hour of TV had been used up.

Go out and play in the dirt.

Sure you can have a hammer and nails. Just don’t nail your sister to the garage wall and no one had better get ANY blood on their clothes.

But that one hour a day did not include movies, or at least some movies. If it was a musical, no problem. You can watch The King and I till the cows come home, if we had any cows that is. I used to sing “Part of Your World” in my sleep they watched The Little Mermaid so often. If it had Charlton Heston in it, you were good to go. Ah Charleton Heston, how we loved him.

Parting the sea in The Ten Commandments, “Behold His mighty hand!”

Running a circus in The Greatest Show on Earth, “Your veins are full of sawdust!”

If a movie had Charleton Heston in it then most likely I let them watch it. Well all except for maybe Touch of Evil. That movie even creeps me out. But most anything else with CH in it was a thumbs up.

And that is how, in 1992 we first encountered the movie Crash Landing: The Rescue of Flight 232. Just a little made for TV movie with CH, Richard Thomas, James Coburn and a cast of other TV actors telling the story of the 1989 crash of United Airlines 232 in Sioux City, IA in 1989. For some reason, when it was on the TV for the first time, I hit the record button on the VCR and recorded that movie. And a cult following was born. They watched that tape over and over and over again. I watched that tape over and over and over again right along with them. We were so attached to that particular tape that when HHBL had a short, two day business trip to Rochester, NY and all of us went along  because there was a pool at the hotel, I took that tape along with us (because they wouldn’t be separated from it even for two days) and watched it in the VCR that the hotel so kindly let us rent from them.

And then when we went home……I left it at the hotel in the VCR.

I didn’t think that we would survive the horrible upheaval that happened when it was discovered that the tape had been left at the hotel. Wailing and gnashing of teeth! Rending of clothes! Weeping and moaning. I called the hotel as soon as the loss was discovered but by that time the tape was no where to be found.

We went into deep mourning. No more Charleton Heston playing Capt. Al Haynes saying the immortal lines, “This is the hottest damn tricycle in the world!” and “Pull up…pull up…too fast….too fast…!” Would we ever get over the loss? Slowly life returned to normal. The girls got older. We continued to spout odd lines of movie dialogue and when it happened to be from that particular movie we had a moment of silence.

And then I discovered Amazon.

This was still back in the days of….dial up service. Remember a time when it took 30 seconds or more for a page to load? But Amazon was just the most amazing thing. It was mostly books and VHS tapes back then. I was noodling around on day and typed in “Rescue of Flight 232”, which was always what WE had called the movie….and a page loaded with a movie called “A Thousand Heros”……..it was our movie. So what if the only place it shipped from was Australia. I ordered it, once I figured out how to do it. 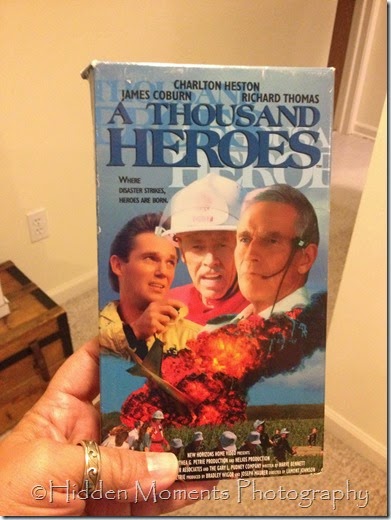 Or at least that is what I thought……until today. 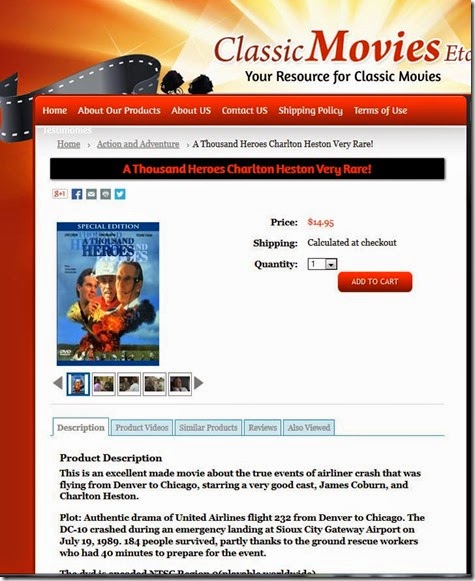 For the love of Peter, Paul and Elvis Presley! It DOES exist on DVD.

Oh thank you thank you thank you YouTube. I was watching a clip or two from the movie, just to relive old times you know. Like having coffee with an old and dear friend that is parted from you. Too strong? OK, I had a few minutes and thought I would indulge. And as I was watching the plane crash sequence for the 1000th time I noticed that the clip had been uploaded by something called Classic Movies….so I clicked on the link, hoping against all hope that they could help me. I mean, if AMAZON didn’t have what I wanted how could anyone else help me (insert sarcasm here).

And there it was. The DVD version of A Thousand Heroes for the reasonable price of $14.95. I couldn’t get my credit card out fast enough. Oh postal service work your magic. Bring my DVD soon.

Why am I waxing rhapsodic about an idiotic movie about a plane crash that happened 25 years ago…..July 19th, 1989. Yes, do the math. That would be 25 years ago this past Saturday. 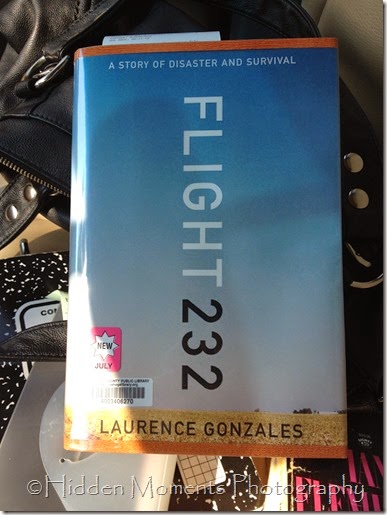 I was first on the waiting list at the library. The book even smells new.

Obsessed? Who is obsessed.