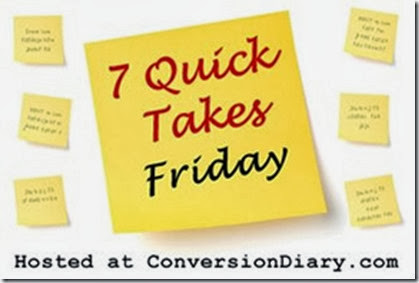 Well, here we are again. Polar Vortex be damned! Remember, when you are done wrapping up in a warm, fleecey layer of blather, you need to click on the picture above to be whisked, at the speed of Max doing his business on a morning when the temperature hovers in the low OH MY GOSH IT’S COLD range, over to Conversion Diary.

Especially not loving it when I have to walk Max the Magnificent when it is –14F. By the time that I am actually ready to go out I feel just like Ralphie’s little brother in A Christmas Story. 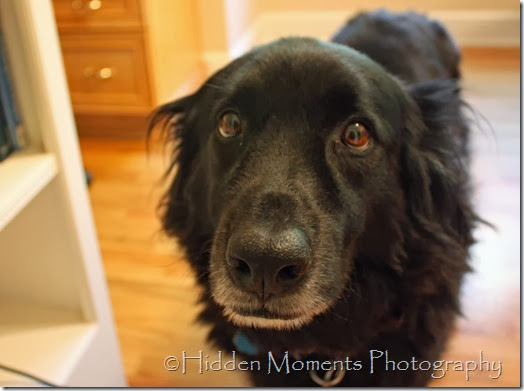 Alpha, it is very difficult to “do my business” when the snow is up to my belly. And it seems impolite to deposit my deposit in the street.

2.
One of the things that I thought/feared that I would miss when moving from OCK was my heated garage. I think I have said before that it is the height of car luxury to walk out into a garage that is warmer than the really cold winter air. We never kept that garage at more than 40F, even in the deepest part of winter. But when it is 0F outside Coco the Subaru really likes not having to deal with the cold temperatures.

Well, my fears have all come to naught. The garage here at Chez Knit, even though unheated, stays “warm” in the coldest weather. This week we saw temps of –14F at one point. That is nose hair freezing temps. And yet, even at that temp the garage never dipped down below 35F. We surmise that this is because the walls of the garage are all “interior”. One side shares a common wall with our bedroom. One wall is a shared wall with the neighbor’s garage. One wall is shared by our laundry room and the neighbor’s laundry room.

All I can say is YEAH!

3.
I always loved snow days when the progeny were still resident at Chez Knit. There was something just so cozy about being able to go upstairs and tell them that they didn’t need to get up because school had so very wisely called off the day. We could just hunker down and stay inside and not even get out of our jammies.

Of course I was already up and dressed for the day but no matter.

So on Tuesday, in honor of the fact that all the schools in the area were closed because of the temperatures….

I gave myself a snow day.

I did get dressed, because really I am just not mentally built to stay in my jammies all day. I have tried and it just makes me crazy.

I was able to make a dent in my ever growing queue.

It was a lovely day.

4.
And speaking of knitting and reading and Netflix all day. Part of what I did on Tuesday was to frog several projects that were years old but that I didn’t particularly like.

I have come to believe that if you have knit something and you don’t regularly use it, if you look at it and say, “Meh” and go on to the next thing…..that project needs to be frogged and the yarn reused.

Sometimes that isn’t possible because the yarn is just too worn and all felted together. But many times that is not the case.

I frogged back a shawlette that I have no idea why I ever even knit. I only knit two shawlettes before realizing that I didn’t like them. If I am going to knit something that is lace then I want it to be a bit more substantial than a shawlette which doesn’t cover much.

And then there was the scarf that I frogged. This was something that I had knit back when I picked up knitting again. That would mean that it was knit sometime in 2007. And I had used it quite a bit. You might be asking yourself, “Deb, why frog back a scarf? Just give it away.” Well, I will tell you. I knit that scarf with four skeins of Noro Silk Garden. That would mean that the scarf cost me $40 to knit.

That is an expensive scarf. And I love the yarn.

So I now have 4 skeins of Noro Silk garden that are wound in balls. I will re-skein them, give them a soak, give them a dry and stretch to get the kinks out. And then re-knit something else.

It was worth the effort.

5.
Since the weather was abysmal this week I also finished another project that I had been planning for a long time.

We needed another rug in our bathroom. Something to go in front of the sinks area. And I had so much fun doing the other t-shirt yarn rugs that I figured I would make another one for that area. I had started the process of collecting old t-shirt here and there.

And then Dad died.

During the time I spent out at TOH, Parental Unit Mimi handed me two huge bags of t-shirts that had belonged to Dad. She knew that I was needing t-shirts.

And the rug is now done, with t-shirt yarn to spare. 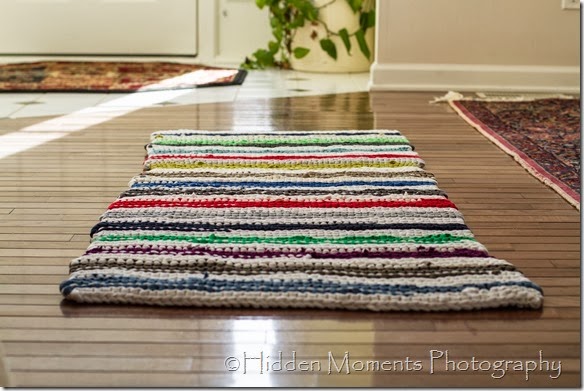 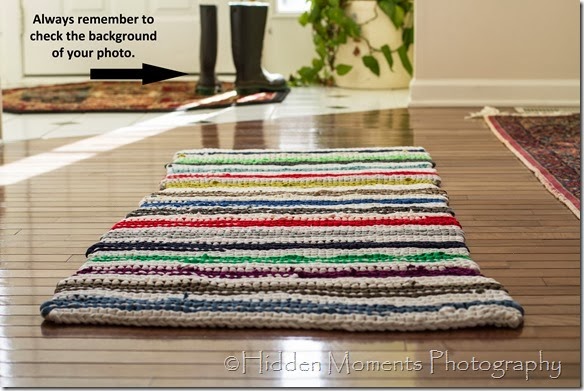 Making t-shirt yarn is very easy. In fact I think it is probably the “pin” of mine that is most often re-pinned on Pinterest.

6.
I am cracking open a bottle of home brew this evening, just to see how they are doing.

I really cannot wait any longer to do this.

The rest will now go into the frig for some conditioning before consumption.

But I just have to try one.

7.
And just to add some laughter to your day…..a cat that eats the mail.

When I was growing up we had a dog, Gretchen, who did the same thing. I am not sure that the mortgage company laughed all that much when my dad had to call them and ask for a new “mortgage receipt book” because the dog ate the other one.