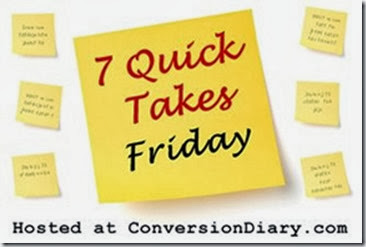 Now that my fingers have thawed out after the Polar Vortex lets get down to blathery business. You know what to do. When you are done bowling for blather here you need to click on the picture above to be whisked, at the speed of the ceiling skim peeling off my ceiling, over to Conversion Diary.

So little time. So very much blather.

1.
Well I certainly fell down the blogging rabbit hole this week. I really didn’t have an excuse, I just didn’t do it.

Well, I wasn’t going to blog on Wednesday anyways because I was on a photography job (more on that later) but other than Wednesday…no excuse. I am just a lazy person.

January is always like that for me. I think it stems from the fact that November and December are always such busy months here at Chez Knit that when January rolls around my brain just checks out.

Or it may be that I am just lazy.

2.
It was COLD earlier this week. C.O.L.D. So cold that when I put the blinds up in the morning all the windows in the living room were covered with frost. I thought I was in the middle of Little House on the Prairie. Where was the maple syrup to make snow candy? Will Pa get back to the house without being eaten by the panther? Perhaps we should start twisting pieces of paper into shapes so that we could use them in the fireplace…..which would be VERY difficult as we only have a fake gas fireplace now.

And speaking of staying warm in the “Polar Vortex”, HHBL and I have been amazed and very pleased at how warm and cozy Chez Knit is when the weather is beastly outside. There are very few places in the house where there are temperature extremes (unlike OCK). The back area, with the family room and kitchen, are a bit cooler than the rest of the house and our bedroom is actually a bit warmer but other than that….PERFECT! I would guess this is because the back of the house has the most window/sky light exposure and our bedroom has the least. The master only has one window and three walls that are actually interior walls.

OCK was a pain when it was very cold outside. It didn’t matter what we had the temperature set at it always felt cold. I think that is partly because there were so many windows (50+) and partly because, even though we actually had two furnace units, one was a smaller unit and it should have been bigger.

But that is no longer my problem.

The biggest surprise, temperature wise, is the garage. At OCK we had a large and heated garage. On very cold winter days it was truly a lovely luxury to go out to a garage that we kept in the low 40’s. But here at Chez Knit….no garage heater. We didn’t know what to expect in the winter but we have found, even on the coldest days, and it got down to –16F this week, that our garage stays at around 34F. We think that is because the only part of the garage that is an exterior wall is actually the garage door itself. The rest of the walls are surrounded by other structure, some ours and one wall the garage next door.

3.
The roofer is finally coming today.

And I am pretty sure that he is going to tell us that the leak in the family room ceiling was due to an ice dam. I am hoping for another result but we didn’t have any leaking from that spot when we had boatloads of rain AFTER the leaking stopped. The ice that has been in that spot was all gone by then.

The roof at Chez Knit is the original one when the house was constructed. That means that it is almost 20 years old and is on it’s last gasping. We knew that when we purchased the property. The financial thought of replacing this roof was much less painful to us than the thought of replacing the roof on OCK. That would have been a MONSTER of a project.

We will see what the roofer says.

Ah the joys of home ownership. 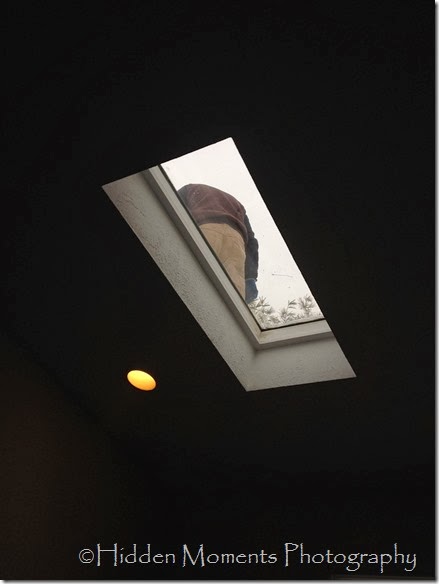 Yup, it is an ice dam issue. 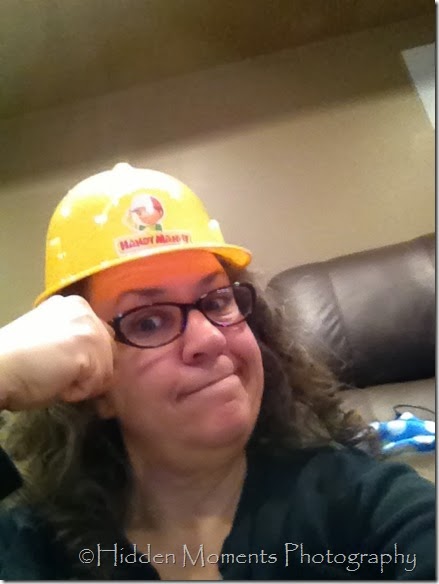 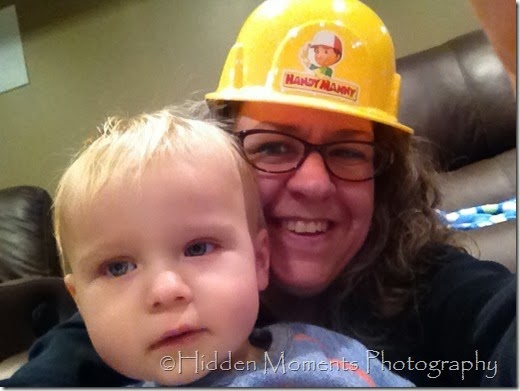 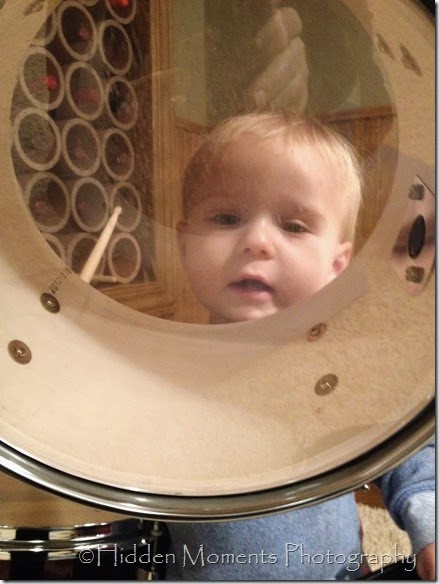 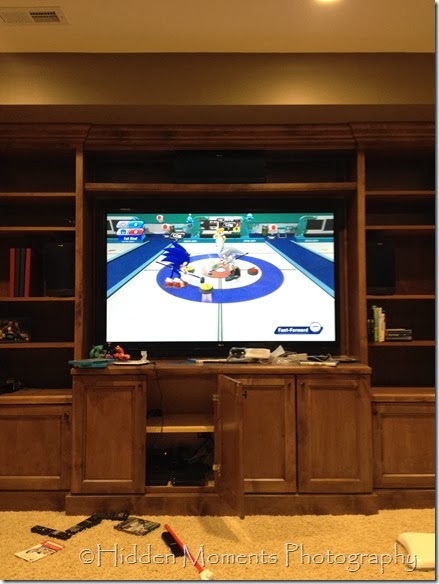 Got to hang with my boyfriend this week. He even let me wear his hard hat. AND he let me hear his stellar drum work.

My ears may never be the same.

And just to make the day extra special I was totally and completely annihilated on Wii Curling by his 6 year old brother.

It was a humbling day.

5.
I am learning that part of being a photographer is being flexible and improvising.

Case in point. Wednesday found me in the Atrium of the Student Center at Cleveland State. I was taking head shots for college students attending a seminar/job fair put on by Cleveland Leadership Center.

I LOVE doing these kinds of jobs. Interacting with college age students, especially highly motivated ones, is just excellent.

The only problem was that when I arrived at the Atrium no one had really carved out a specific spot where I was to set up. I was told, “Oh, just go find a good spot for yourself.” Hmmmmm.  The atrium is large but when it is filled up with tables set up for job vendors then that is a problem. 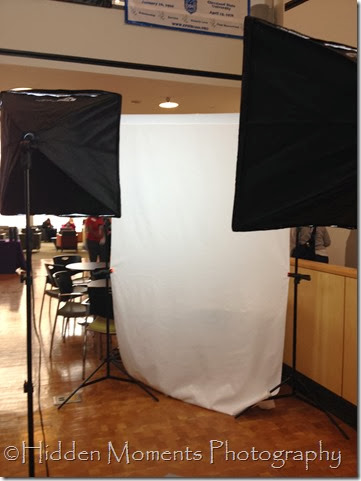 I improvised. It was definitely a tight fit. And I was just barely off a traffic flow pattern. But we did just fine. 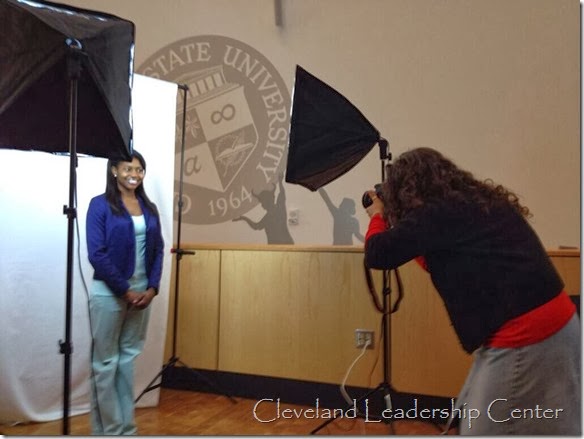 Taken by Heather from CLC.

It was a fun afternoon

More and more I have to take my lighting set up with me when I do a job. It isn’t a huge set up, I really like to “work spare”, but it is still several soft boxes with accompanying stands plus a back drop and light bulbs and etc. I cannot expect that I will have someone available to help me move the several bags that all of this comes in PLUS the backdrop and the carrying case for it.

Then I had a scathingly brilliant idea (tell me which movie that came from. I know the progeny can). I bought this….. 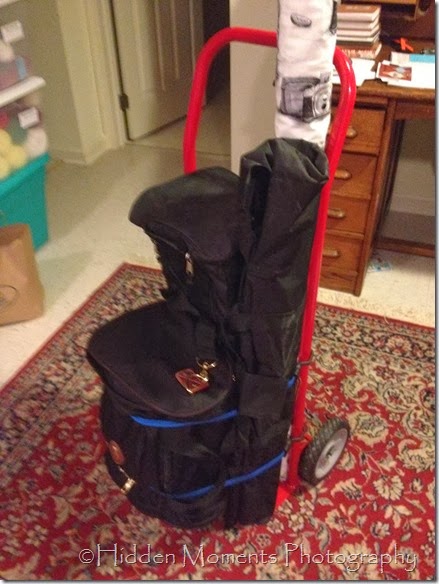 Just about the best $29 I have spent in a long time. It worked like a charm on Wednesday. 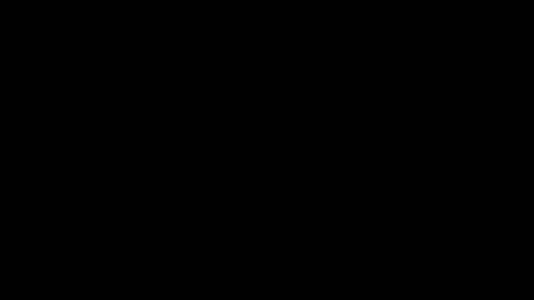 And last, for your viewing pleasure in the lead up to the Olympics…….

I LOVE these videos. If you actually go and watch this on YouTube you will find a ton more that are Olympic hopeful specific. And not just for USA team members but for Olympic hopefuls from all sorts of countries.