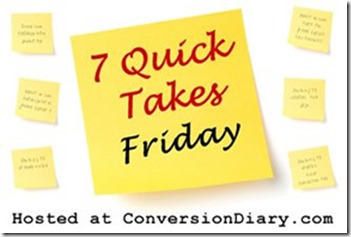 Greetings from The Frozen Northeast Ohio where the temp all week has been in the 90’s with a humidity index in the 104F range. We are complaining. But then again we will also be complaining in January when the temp is 10F and it is snowing. We are never satisfied.

Make sure you follow your Friday directions to the letter. When you are done applying a cooling layer of blather you need to click on the picture above to be whisked, at the speed of the sweat quickly forming on my dewey feminine moustache (curse menopause!), over to Conversion Diary.

Crank up the blather and let’s get this party started!

Moving to a new house in FOUR WEEKS!

Trying not to be overwhelmed by all that needs to be done. HHBL and I were ruminating that it is good that we have a solid and stable marriage because right now we have about 5 of the top ten stressors going on around here.

2.
Today I am trying to have a “Get the Big Picture” day. There is so much going on from so many different angles and there are so many action items floating around on different lists that I just have to take a day and focus on getting everything into one place and on the master list. If I don’t do that then something SURELY will get missed.

Normally I keep my calendar and to do lists digitally. I might start with a pen and paper list but then it all goes into the iPhone so that I have the list always available. But I have also purchased a small white board calendar so that I can see the big picture of what needs to happen in the next 28 days. That way I stay on track and don’t get side tracked….which has already happened once today. On a day when I have so much that HAS to be done I decided that it irritated me too much to have my Outlook and iPhone contacts all messed up (somehow doubled). So I sat here and did all the corrections.

Now back to the white board and the lists.

It is the only way that I am going to survive with some sanity intact.

Or at least some of the small amount of sanity that I actually possess.

3.
One more comment on the fist blankets that are on their way to the Hamlin Fistula Hospital.

Because I cannot just knit the basic pattern as it was written I had to fiddle with it. And because I did mitered squares rather than knitting in strips it took FOREVER to seam all 20 squares together. I figured out a faster way but it still took too long.

So now I am doing the pattern the way that they suggest…..for the moment.

But I am sure that I am going to get bored with that and then fiddle some more. I have until February because that is the next time I will send blankets.

4.
I haven’t moved in almost 13 years. I know my little corner of the Frozen Northeast Ohio fairly well. All the little back corners have been explored. I know where to get things that I need.

And now I have to figure everything out again. That is both a frustrating and exciting prospect for me. I have to figure out where the bank is and the post office. I know where the closest (but more expensive) grocery store is. LL told me where the Giant Eagle is. I already know where the library is (THANK GOODNESS!) and the Honey Hut ice cream shop. But it will just add to the overall sense of confusion for a time not to know right away where I need to go.

BUT, and that is a big BUT (not to be confused with MY big butt), I can walk to a bunch of stuff.

HHBL and I are VERY excited about that. One of the things that I haven’t liked about where Chez Knit is located is that for me to do or get to anything I have to get in the car and drive there.

New Chez Knit is within a mile walk of just about everything.

5.
I had been contemplating asking the new owners of Chez Knit if it would OK with them for me to take some samples of the plants that I have nurtured here for the last years.

But I have decided that a clean break is really what I want to do. No plants (other than house plants) will be going from one place to the other. I do have some planters that are filled with one thing or another and those will go with me.

Other than those, everything else stays. I will just be too busy to actually put stuff in the ground right away. And I don’t even know what I want to do over there. Most of the landscaping is taken care of by the association. Anything that I put in the ground I get to take care of . That seems reasonable.

A clean and uncluttered slate to start with.

6.
Tomorrow brings the inspection of the new place. I am sincerely hoping that nothing shows up that will be a major issue!

I am going to use the time to measure spaces and think about what furniture will go where. That way it gives me an idea of what furniture will not be going with us. Shoe Queen is taking several pieces for their apartment but that still leaves a bunch of furniture. I have a general idea of where things are going to go but I still have to do some measurements.

Hopefully then I can put an hour or so to thinking about where everything generally goes so that on the big day I can just stand there and tell the movers where to put the furniture.

And then I am sure I am going to make HHBL move some things around when I don’t like where I envisioned them going. Certainly in the big living room and the sun room the first things that will need to go down are the Oriental rugs.

7.
And just because I need a laugh today….

How to turn your cat into a machine gun. This little ditty arrived via Cartoon Girl. It is a good thing that Zachary Mr. Crabby Pants is no longer with us because if he was…..

You KNOW I would so be doing this.