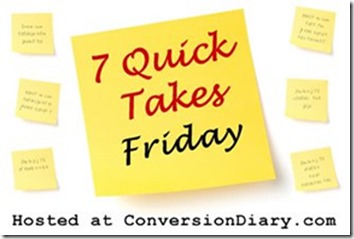 Egads!!! 14 days til wedding and 21 days til move. Perhaps we really are crazy like the people who are buying Chez Knit think we are.

Remember to do as I tell you. After you have soothed the inner crazy with a dose of blather you need to click on the picture above to be whisked, as the speed of Anthony Weiner’s SECOND fall from grace (can we PLEASE stop hearing about him), over to Conversion Diary to catch up with all the news that’s fit to digitally print.

Boxes and boxes of blather! 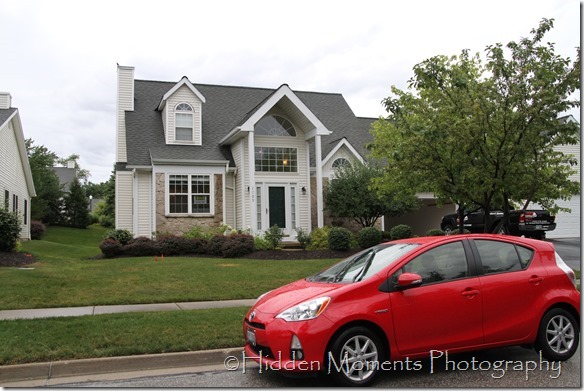 Come August 16th in the year of our Lord 2013 this lovely place will officially become Chez Knit.

We are very excited.

And I can hardly wait to repaint the master bedroom which is currently a less than desirable shade of pale pink.

And then there is the upstairs which is a pale yellow color. Have I ever mentioned that one of my LEAST favorite colors is yellow.

Heather K. we need to have coffee as it will no longer be such a long drive for either one of us.

2.
I am continuing to spend time each day cleaning things out in anticipation of the VOA pick up next Friday and then the major packing the week after the wedding. Despite the fact that I have spent the last 3 years or so decluttering my house (which never actually felt that cluttered) there is still more stuff that I find that I can live without. My bench mark really is if I haven’t used it in two years then it doesn’t have a place in my life and can be donated.

Now that rule doesn’t apply to some family memory stuff that will go with and be stored in the basement but for the most part everything that you have in your life can fall under this rule. For the most part I haven’t had a problem adhering to this although there have been one or two instances where I have had to make a hard decision or two.

But there is still a BOAT LOAD of things that we are saying bye bye to.

Our goal is to be a “lean, mean moving machine” on August 16th.

3.
I had fully intended to knit myself a lace “something” to go with my dress for Shoe Queen’s wedding. We all know how much I love knitting lace. For some reason I find it incredibly calming to do so. And I actually started something….

But I have frogged it and decided that I will just not. Knitting lace with a looming deadline that is so very close is just a recipe for lacey disaster. Trust me, I will royally screw up and then just be very angry and frustrated.

So the Madelinetosh Lace in the lovely colorway “Cousteau” will just have to wait for a bit. I am still going to use the same pattern that I had intended to knit now as it has a lovely wavy quality to it. But it is not going to be now.

4.
I am making a concerted effort to use up a bunch of stuff in my freezer so that there isn’t all that much to move in three weeks.

I am almost down to the last of my homemade pizza sauce. And we are almost done with the homemade pasta sauce. Once we are a bit settled at the new place I will make a bunch of big batches to replenish.

But my freezer hasn’t been this empty in a LONG time.

Of course, if the local orchard sends me an email telling me that their peaches are ripe and ready for purchase then I will just have to process and freeze and then move. But that is a sacrifice that I am willing to make.

Cuz we are out of frozen peaches at the moment and I feel the lack.

As well as frozen corn.

5.
Because of the absolutely crazytown like schedule here at Chez Knit one of the things that has suffered is my ability to sit down and read blogs.

I read too many blogs.

But I cannot delete them. I love them so.

However one errant click fixed that dilemma for me.

I have been using Feedly for a number of months now, ever since I heard the news of the impending demise of Google Reader. I love Feedly. And I was sitting at my computer the other day scratching my head and wondering how I was going to get through all the blog posts that I hadn’t read.

And I clicked on the little check button to say “Mark as Read” for one particular blog……..

Only I wasn’t looking at just that blog on the screen. I was looking at the main screen, the gateway screen. And I realized, after the click, that I had told Feedly to mark as read ALL the blogs that I read. I just sat there for a minute wanting to kick myself for my inattention. And then it hit me that maybe this was a good thing.

I wiped the slate clean so to speak.

Now to keep up in a better fashion. 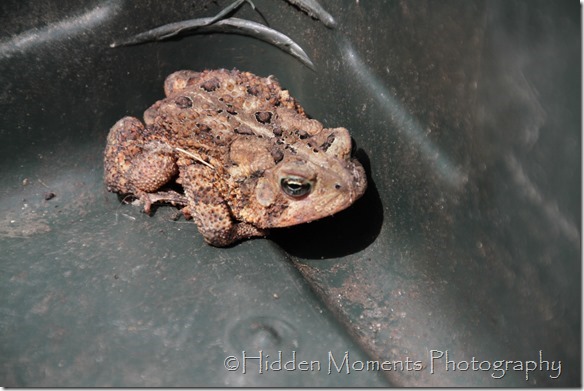 Look who I found hiding in the recycling bin on Wednesday. I am not sure how he got there but he couldn’t have been there all that long because we have garbage pick up on Tuesday and the bin was empty Tuesday night. Or at least I thought it was empty. But I will be honest to say that I didn’t check all that closely cuz when I went down to get the bins I was at a run due to the amazing thunder and lightening that was happening all around. He may have already been in the bin by that time and I just didn’t notice until Wednesday.

He liked it in the bin and was reluctant to leave until I dumped him into the garden.

7.
I will have a longer post on this later in August or September perhaps but I am both excited and nervous as to how the new house is going to work out as far as my “work space” is concerned. In one way it is going to be fab because I am going to take over one portion of the basement to have all my knitting, scrapping, sewing stuff in one place.

You would think, with the size house that I currently have, that I would have all of that in one place but you would be wrong. Sewing (which I love) is in my office. Knitting (which I REALLY love) is in my office. Photography (which I live and breath for) is in the office. Scrapping (which right now I am meh about) is in the basement. And obviously my computer and desk are in my office. The problem is where to put the computer and desk. I think, just think mind you, that my desk will be upstairs on the main floor but that everything else will be down in my woman cave.

At least that is the plan right now.