Brenda Dayne I Kind Of Disagree

We are going to talk about knitting and yarn for a while.

And I can just hear about half of my meager readers click off and go do something else.

Root Canal anyone? That sounds less painful than talking about yarn!

The silence is deafening.

But I soldier on.

Oh Brenda Dayne I never thought I would disagree. And perhaps this isn’t really a disagreement with you. I don’t know. I am so conflicted. You have been my knitting beacon. If you say it cannot be done, I go on to something else for surely you are correct in all things yarny. And you live in a place where people’s voices are melodious (I love that word and just wanted to use it).

Say it with me…

So, back in December, Podcast #106 to be exact, there was much discussion about what to do with socks knit long ago. What to do with them if they are old and perhaps worn out. Or just old and you don’t like them. Make them into wrist warmers? Kiss them one last time and then consign them to the bin? Add new heels and/or toes? And many expressed the thought that if the socks had done their duty that you could dispose of them.

And I suppose that is true.

But then I stared wondering about socks that are in the sock basket that are old in years but aren’t that worn because……well….you just don’t like them all that much. What to do with them? Give them away. Just keep stuffing them down further in the bottom of the basket so that they can’t give you accusing looks when you pass them by? 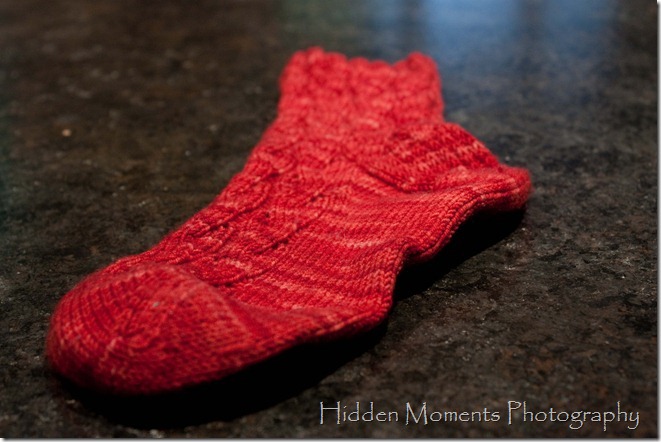 These socks. I have been knitting socks since…..hmmmmm…..I think since 2008. And these are some socks that I finished that first year using the yarn Collinette Jitterbug to be exact. Yarn that cost me about $30 at Miss Chickpeas. Take a look at them. What don’t you see……well, you don’t see a ton of “wear and tear” on them. Toes and heels are still in pretty good shape actually. And that is because I don’t like them and therefore I just don’t wear them as often as some of the other socks in the arsenal. They are GIGANTINORMOUS on my feet. I had no clue what I was doing early on. I had no idea how to tailor my socks to my feet. I was clueless. And these socks show it. I think I have kept them around so long because they are the socks that I was knitting when HHBL had his little “incident” in 2008.

And then I heard podcast #106. And it got me to thinkin’. I wonder if I can frog back those socks????? Brenda Dayne doesn’t think so and she is my knitting guru (along with the Yarn Harlot of course). But I don’t like being told that I can’t do something……

One caveat on the following instructions. IF your hand knit socks are very threadbare at the heels then I do not think this will work. If it is just a problem at the toes then those can just be cut right off. 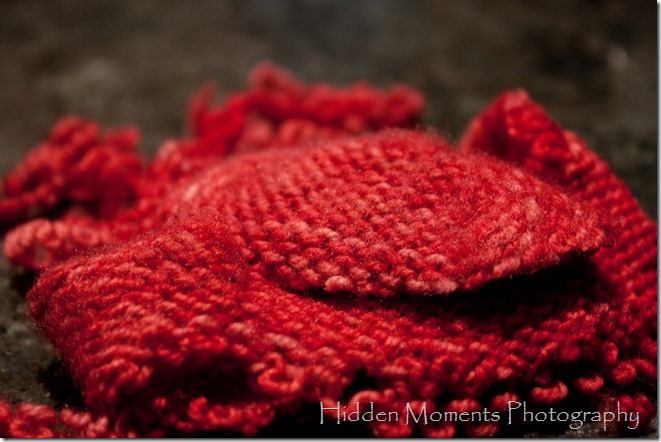 First I cut off the toes. I do NOT have enough patience to undo a very well done Kitchener toe. I am very good at Kitchener.

Then there was a bit of working the yarn to find the end that would successfully frog, and dealing with the fuzzies that are part of wearing the sock. 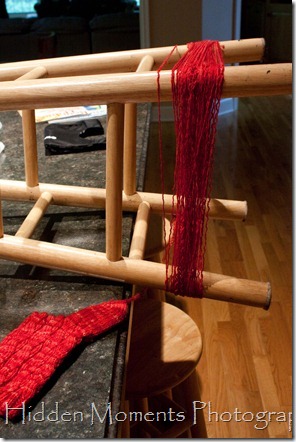 Necessity is the mother of invention when frogging a long ago sock. You may be asking yourself why I did this rather than just rolling it up in a ball…. 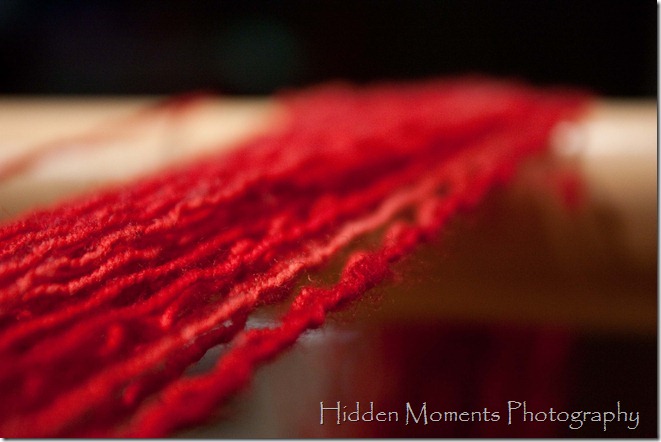 Take a close look my friend. Very kinky yarn. Not “50 Shades of Grey” kinky just kinky. Wool retains it’s shape. And so, in order to get rid of that kinkiness I had to form the yarn into a skein. 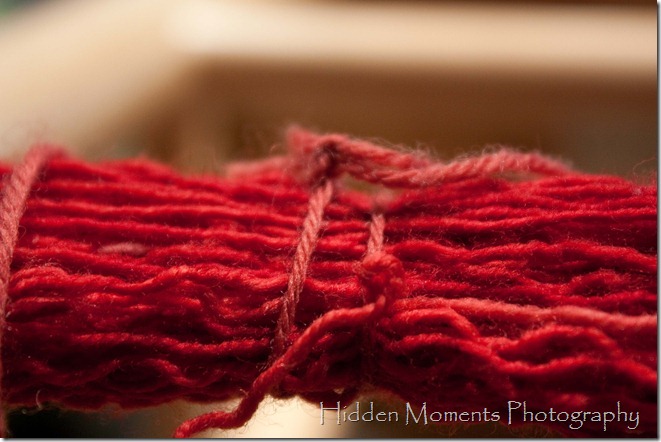 Tie in 4 spots around the skein to keep it from getting all tangled. Tangles would sort of defeat the purpose of all of this. Do this BEFORE you remove it from whatever you have been winding it around. Believe me. 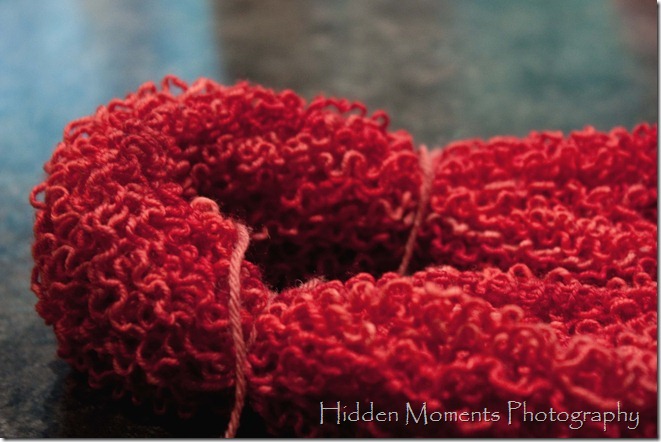 Perhaps I should rename this yarn “Christian Grey” because it is very, very kinky.

But the beauty of yarn that is partly or completely wool is that you can relax it. You can make it happy. 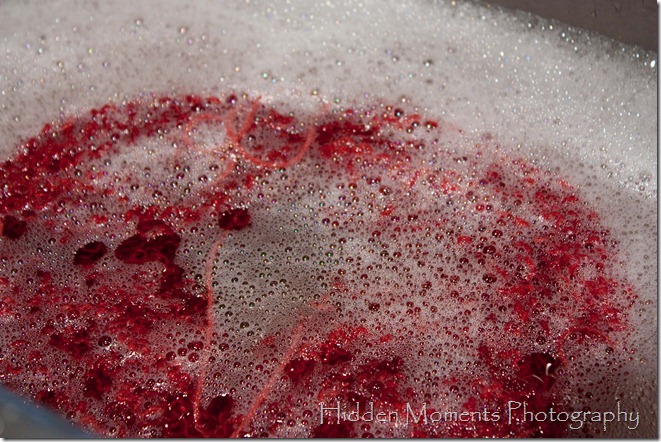 Gently put it into a sink filled with cold water (NEVER HOT) along with some baby wash. There are many wool soaking products but baby wash has always worked well for me.

Leave that yarn in there for at least 30 minutes. I could actually see the kinks relaxing as the yarn absorbed the water. When the time is up gently lift the skein out, carefully squeeze out the soapy water. Rinse and repeat. Then lay it float on a towel and roll it up and get out as much water as you can. But be gentle. Don’t rub it, just squeeze gently.

Now back to the instructions.

However you aren’t done yet. Because you have to dry the yarn and you don’t want it to go back to it’s kinky state. 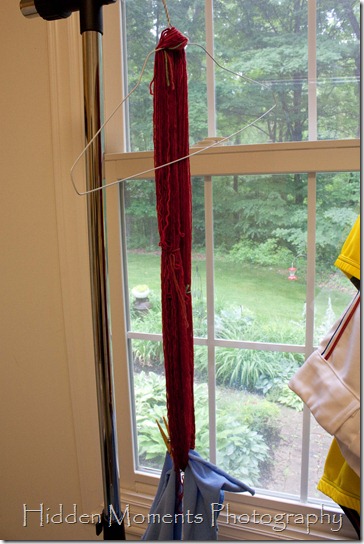 Carefully hang the skein on a hanger. Mine was hanging in the laundry room over a vent so that there was a gentle breeze every time the A/C came on. It was very hot and humid outside that day otherwise I would have hung it outside. And just to be sure that the skein didn’t “re-kink” I rigged up a weight at the bottom…. 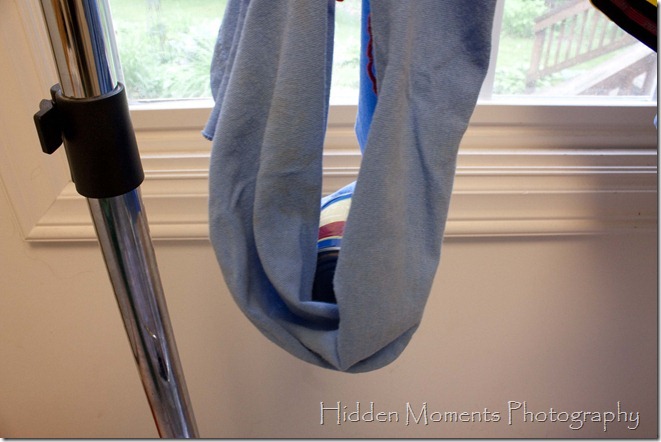 Not very heavy but just heavy enough to keep some tension on the yarn. Now leave it there for 24 hours until it is totally dry. 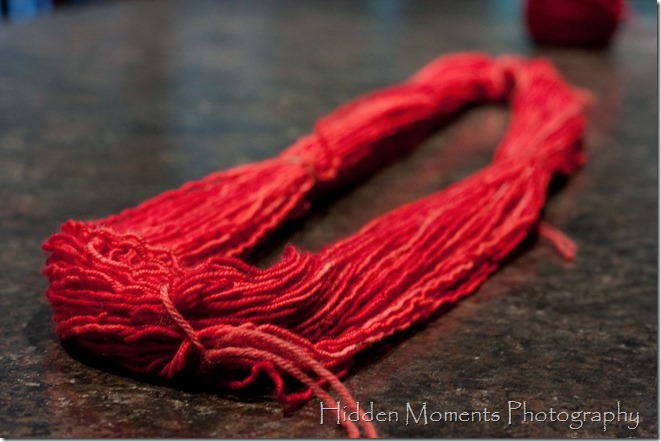 Voila! An unkinked skein of Collinette Jitterbug. Or actually half a skein because it comes in one big skein. 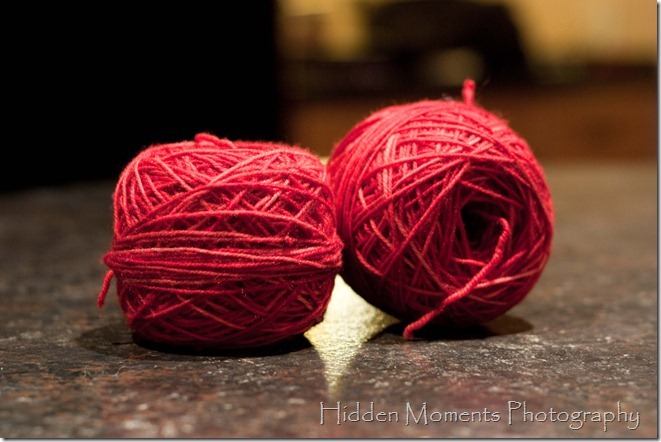 I have come away with less yarn than I started out with it is true. And Collinette Jitterbug isn’t a really good value for the money anyways (I think their skeins are a bit on the small side). But it was a $30 skein of yarn!

So, you can salvage yarn from an old pair of socks.

But only if they aren’t terribly worn. So maybe Brenda Dayne and I are both right. I like to think so.