And The Brides Just Keep On Coming

The last two months have been our season of wedding around here let me tell you. HHBL’s cousin got married several weeks ago and we partied the night away with family.
And then, of course, there was this little gathering.
And then, this past weekend we attended the wedding of Alison and Brendan, Alison happening to be TMO’s very, very BFF in the whole wide world. They have been buds since they saw each other across a crowded 1st grade room and decided that they were going to be best friends. There was no going back on that. Come heck, high water, or boyfriends…and now husbands.
I really love weddings, especially ones that I am not in charge of and am not paying for. And this wedding was so lovely and unusually. Lets take a look shall we? Cuz, you know, you guys are just my BBF’s (best bloggie friends) and I have to share everything with you. Maybe tomorrow we can talk about the terrible sore throat I had last week.
No?
Fine! 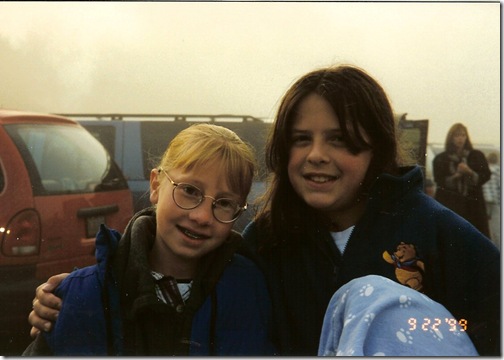 Like I said, Alison and TMO have been friends for a long time. They do not look like this anymore. If they did I am not sure that we would be having weddings.
Unless we were in West Virginia where I believe the age of consent for marriage might be a tad younger.
Where were we? Oh yes. Well, every wedding has it’s on flavor as it were. Some are very formal where you sit in quiet anticipation of the booming organ announcing the arrival of the bride. Or perhaps there is a string quartet or something.
In the 20 minutes or so before the wedding we were treated to a number of different musical interludes. 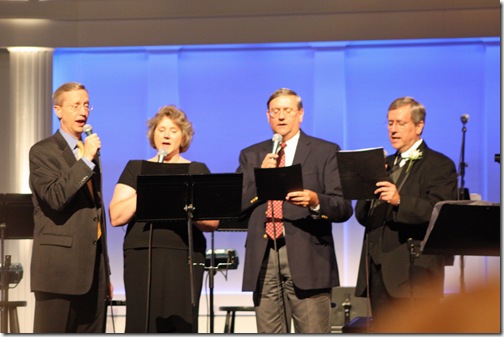 The Father of the Bride and his siblings sang. They have been singing together all their lives and it was lovely. You can tell which one is Jim, he has the flower. 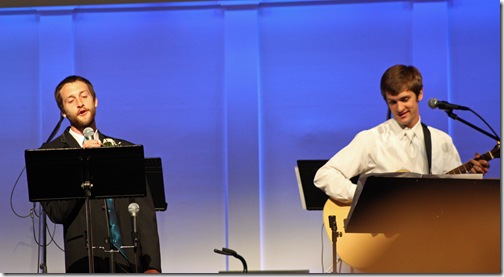 The the groom and his brother did a song. Brendan (the groom) happens to be with one without a coat on and without a beard.
Oh, and by way of explanation. In a bunch of the forthcoming photos there will be a blurry area or two, right down there in the corner of the picture. The spot that cannot be cropped out even though I tried. Those happen to belong to the two women with big hair who were so kindly seated in front of me.
Sigh. 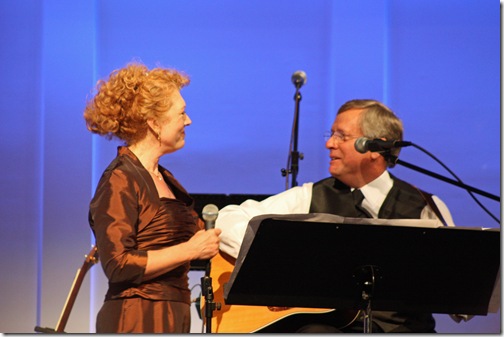 The parents of the bride sang the song that they sang to each other on THEIR wedding day. There were many eyes that were a tad damp, including the Father of the Bride. The MOB is one of my dearest friends, with just the sweetest heart you will ever encounter.
Why she likes to hang around with me I will never understand. 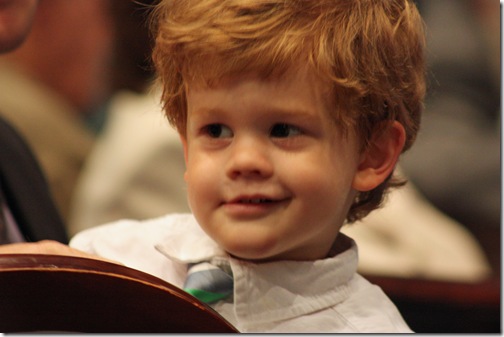 I have no idea who this little fellow was but he looked like he was plotting mischief. 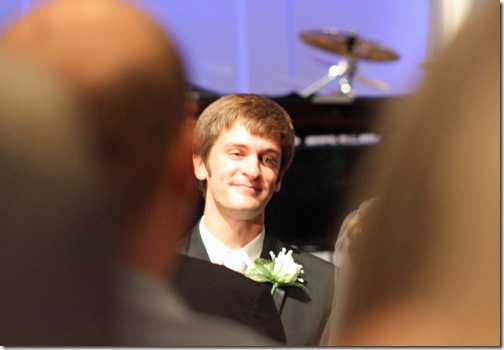 Brendan gets a good look at his bride. 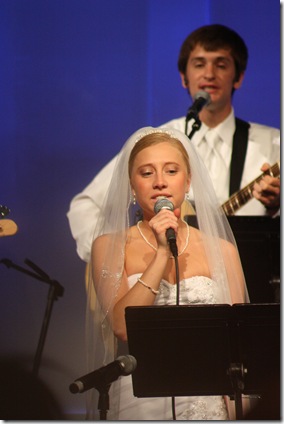 Alison and Brendan’s wedding was unique in a bunch of ways. I mean no wedding is ever the same but I think that this is the first wedding where the bride and groom led us all in worship. You don’t know Brendan and Alison but let me tell you, that was just so “them”. 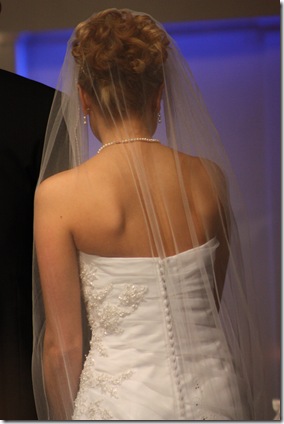 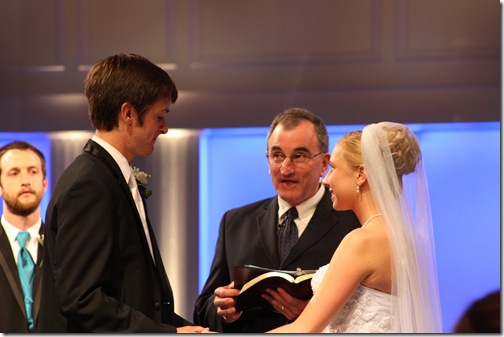 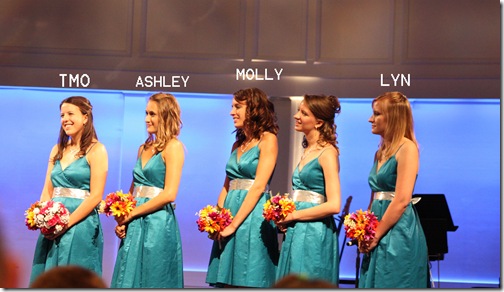 Look closely and you might see a repeat of bridesmaids from TMO’s wedding. 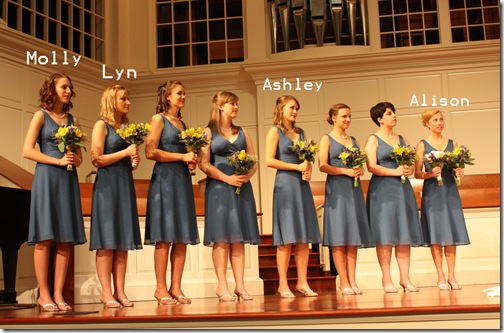 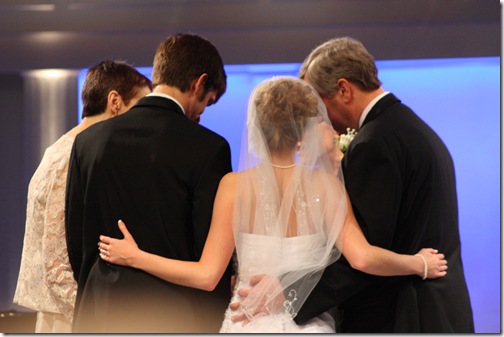 Parents, Bride and Groom prayed together after the vows were said. We have come to know this as the “Shellhaas Huddle”. 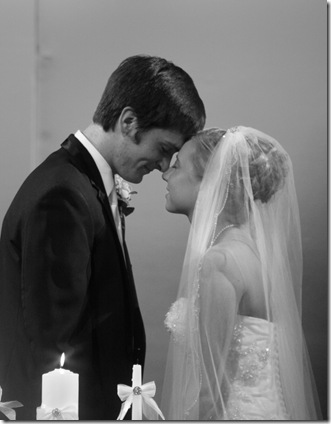 This may, perhaps, be my favorite picture from the entire day. It is just so them. 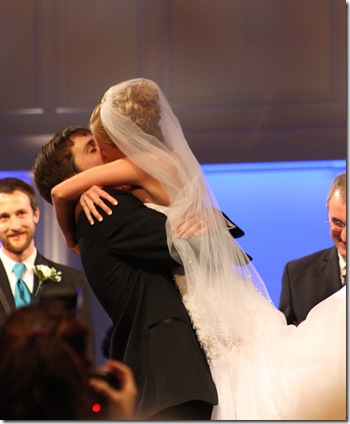 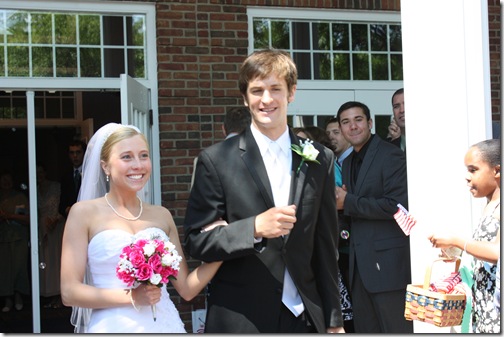 And then it was on to the reception. And I will be honest. I took about 5 pictures after this point. And why did the picture taking grind to a halt you might ask?
Well, it is because at the reception I got to visit long and hard with some people that I don’t get to see very often. 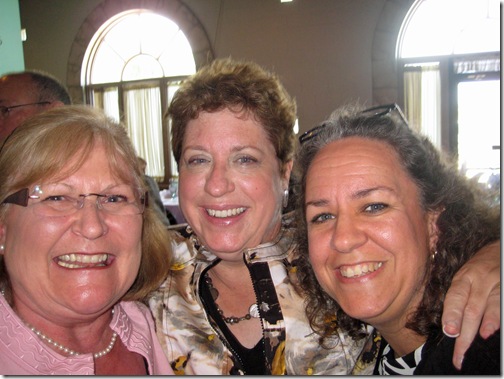 See that woman in the middle? That is Mary my twin sister separated at birth. She is the sister of my heart and I miss her cuz she had the audacity to move to Little Rock. When I still had short hair people often mistook us one for the other from the back. 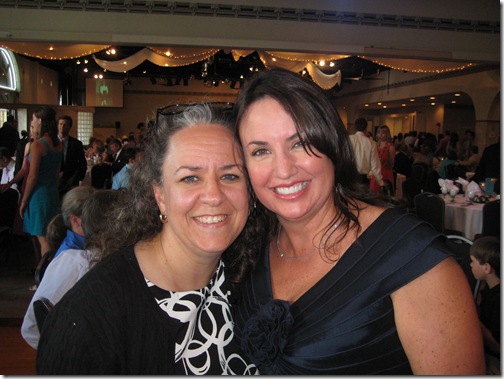 And then there was Diana. Oh Diana. It seems like we see each other all the time because she stalks me on Facebook and Twitter we communicate frequently over the internet. For her and her alone I write my Elixir of Life Haikus because she LOVES them so and she thinks that I am a totally terrible wonderful haiku writer. She is the journalist so she should know. I might have mentioned Diana here. Diana is also the founder of ShareWik which is just the most awesome place to hang out. You need to go over there right now and join and get involved in the community.
And so, we partied and talked and ate and then came home and collapsed because it was just an excellent day.
And Sue? You don’t ever have to do this again you lucky girl!!!
Posted by Debbie at 8:38 AM