In Peru the Rules of the Road Are Optional

You think I am kidding when I write that? If you do then you would be really and totally wrong on that account. So very, very wrong.

On our first trip to Lima, I think in 2005 or so, we were driving back from the store and Alberto my stepFIL was driving. He is a good and safe driver, I have been in the car many times with him, in traffic in NYC no less and I can attest to his driving prowess. So imagine my surprise when he just coasted right through a stop sign. He didn’t even pass his foot lightly over the brake to give the impression of a rolling stop. He just went right through.

Yes, Debbie (imagine that said in a Peruvian accent)

Um, you do know that you just drove right through that stop sign don’t you?

Oh yes, but you see, if I stopped the car behind me would not be expecting it and he most likely would hit us.

I mean, what I am supposed to say to that. And so I began to observe what the other cars on the road were doing and, yes, it would seem that the commonly accepted rules of the road were often…..optional. It is like we were living in the time of Judges in the Bible. You know, “Each man did what was right in his own eyes.”

And so, with that in mind I thought I would relate a small incident that we observed from the balcony of the in-laws condo, as we were having lunch on a Saturday. The traffic on the highway was rather heavy because people were going down to the south to go to the beach. At least that was Alberto’s theory and I tend to think he was right. The sun was bright and sunny. Lunch was delicious. All was right with the world.

And then I looked down and saw this…. 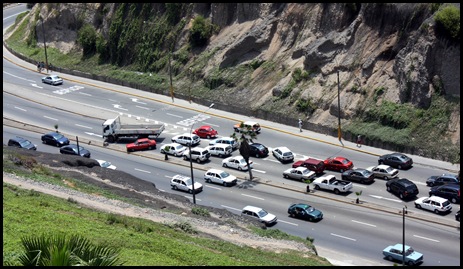 Ummmmm, what do those cars think they are doing?

What you can’t see is that there was a back up on the highway. What you also can’t get a perspective on is the fact that the curb over which these cars are attempting to drive is at least 8 inches high. That is not good for the undercarriage of a car. 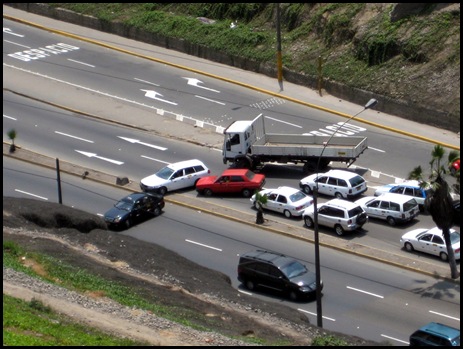 Egads! Once one car made the decision that they didn’t want to wait in the backed up traffic then it was a free for all. Quickly the left hand lane was at a stand still or close to it as cars carefully turned and carefully negotiated their way over the curb, momentarily straddling the median while they waited for a break in the traffic that was zipping along going the opposite direction. And this being Peru, where the rules of the road and all common sense in driving is often absent, well often they just pulled out into the oncoming traffic and made the assumption that people would slow down. 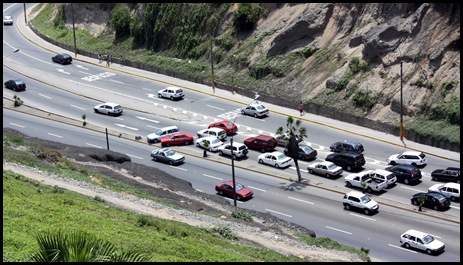 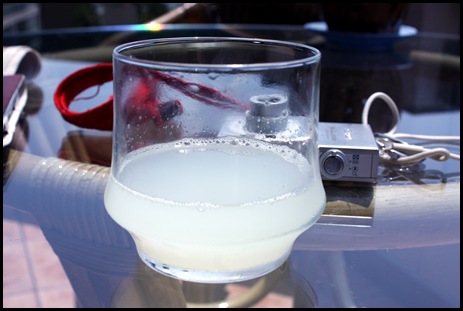 We were so worked up over what we all interpreted as impending disaster and mayhem and slaughter that we needed Pisco Sours to calm us down and make the world seem more rosey and full of drivers who understood that this was not a good thing to do. 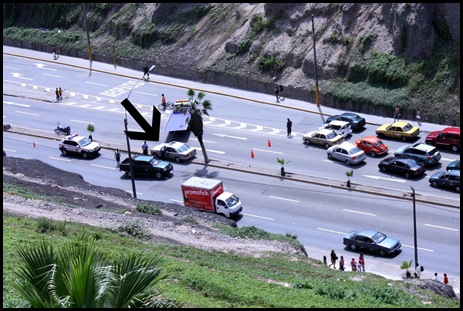 And then it happened. What we all figured would happen eventually. Some fellow, not too long on common sense and certainly lacking in driving skills, somehow got his car stuck on that median, two wheels on one side and two on the other. And he was going nowhere.

Pull forward, nada
Back up, nada
Get out, leaving car door open in oncoming traffic, and take a look
Scratch head (he really did that)
Look under the car as if the answer is under there
Get back in car and repeat process over and over and over

And finally a tow truck showed up, pulling across all lanes of traffic and backing everything up further as they stood around and scratched their heads and tried to decide how to get the car over the median.

Pull the tow truck up one way, attach the cables, give it a go….nada

Move the truck at another angle, attach the cables, give it a go…..nada

And where were the Policia while all this was going on? In the USA they would have been there right away directing traffic, writing tickets, drinking coffee and having donuts. But in this instance we didn’t see any Policia arrive until just about the time that they finally unstuck the car from the median. Just in time to write the guy a ticket before he pulled out into traffic. 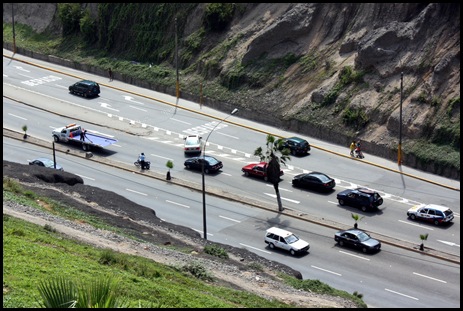 And did you notice. Rather than proceeding along in the lane he was supposed to be in he pulled across FOUR lanes of traffic and a warning zone before proceeding quickly away from the scene of his little “accident”.

I wonder how he explained to the little woman why he was late getting home and how the undercarriage of his car became slightly damaged.