So, we spent some lovely days in Florida, Naples to be exact, visiting the parental units. Lovely and relaxing.

And then it was time to come home. And of course, there was bad weather. That seems like the pattern when HHBL and I fly these days….bad weather. I am a seasoned flier, but bad weather still makes me crazy. Not because I am afraid physically but because it messes up my schedule.

So, we were supposed to fly through Newark and then home to Cleveland. But that so wasn’t happening because of the storm that has socked the Northeast (and us as well). Continental kindly put us on a non-stop going directly home. Well, not home to our house because that would be rather difficult. And not a little awkward explaining the 737 in the yard. You know, home to Cleveland Hopkins International Airport. That outrageously busy hub, cough, cough.

Bumpy? This wasn’t bumpy! Why you should have been with us when we were over the Pacific. I will give you bumpy! Or that small plane ride over central Florida when we flew through a thunderstorm. Now THAT was bumpy.

But no one was listening evidently so I went back to knitting.

And then the pilot told us that we were approaching Cleveland, which was his good news. But that because of all the snow they were receiving at the airport that the runways had been closed for some snow removal. And I immediately flashed to Airport. You know, the movie with Burt Lancaster, Dean Martin and a cast of other aging stars from stage and screen who needed work. It is one of my favorites.

So, the pilot mentioned that the runways were closed for snow removal and I immediately thought of this part of the movie, one of my favorites. 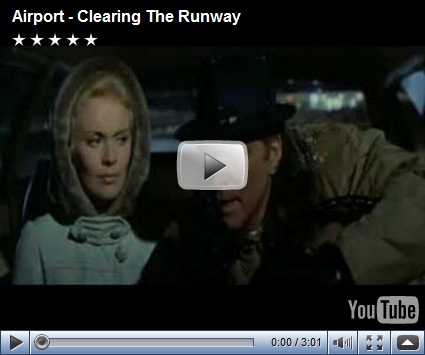 Yes, I know it makes no sense that I would have thought of this when the pilot mentioned that the runways were closed for snow removal.

But have I ever truly made sense?

Does anybody really know what time it is?

Oh, flashback to the 70’s and my love for the group Chicago.

And in case you were wondering, the runways were re-opened in about 10 minutes and we were cleared to land. No worries about getting stuck and having the “snow plow conga line” have to get us out.

Certainly more interesting than this bit of rambling.