And now, because you have all been waiting for it.

And because it is soooooo good.

Here is how to make the bread. Just remember not to let the yeast intimidate you. Yeast likes to do that and that is why you have to knead the bread. To show the yeast who is boss so to speak. This is a REALLY long post and I apologize. But the bread is worth it. 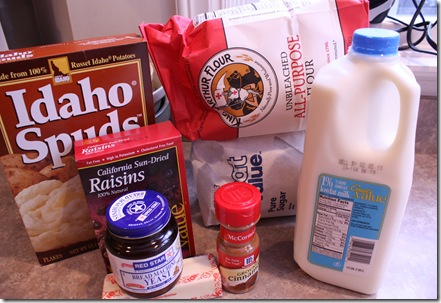 These are all the ingredients that you will need. 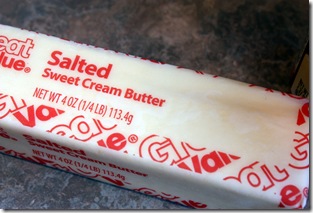 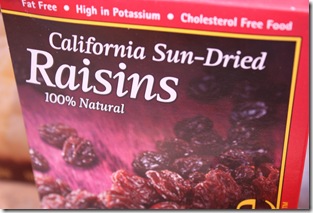 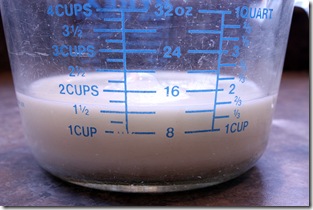 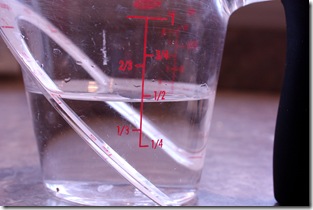 You mix the milk and the water together, you marry them as it were. 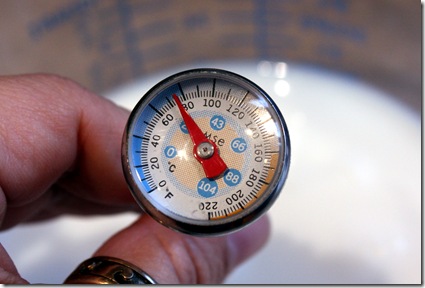 Yeast breads are a funny bunch. They love their comfort. Their nice warm place. And so, that means that you need to heat the milk and water up a bit. And it is very helpful, but not absolutely necessary, that you have a thermometer on hand. This is not warm enough. It needs to be 100-115F. So just heat the liquid up to that. And then….. 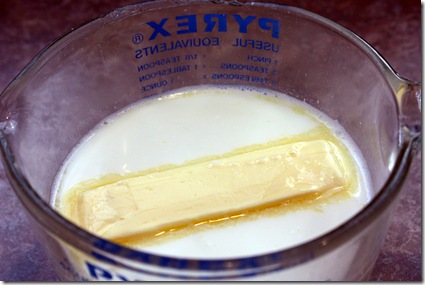 Then you add the butter. Ummmmm butter. Really you should cut the butter up into chunks because you want it to melt into the milk. 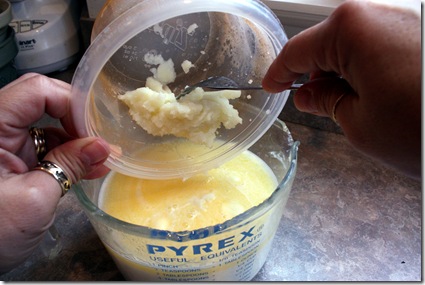 Then you dump the mashed potatoes into the milk/butter mixture. Stir until it is a lovely soupy mess and set it aside to cool to lukewarm. It looks gross but ignore that. 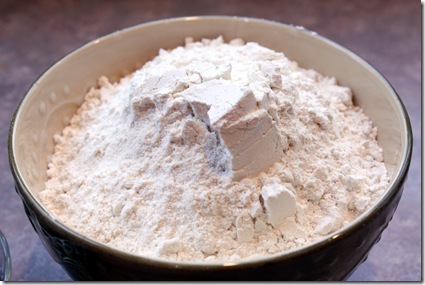 Then you want to mix 3.5 cups of flour with… 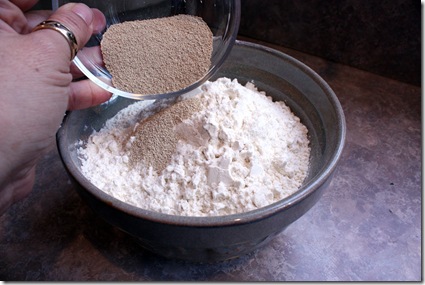 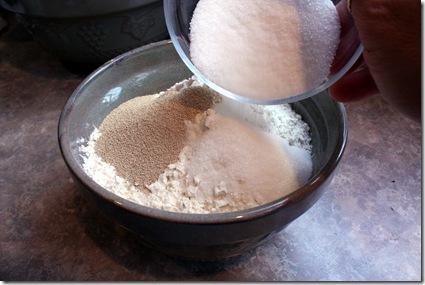 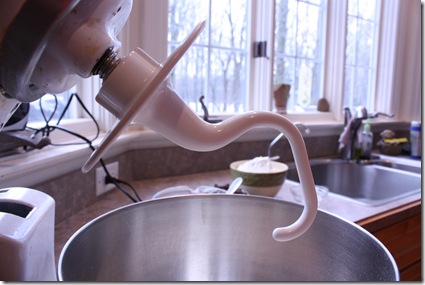 Do you have one of these? This is a dough hook and it is very handy with this recipe because the dough will be rather stiff when all the flour is incorporated. It is a marvelous invention. I love mine and might marry it….if I didn’t have HHBL around that is. He is better than any dough hook. 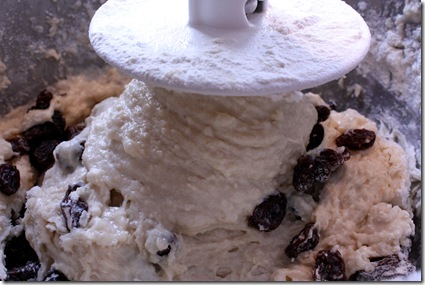 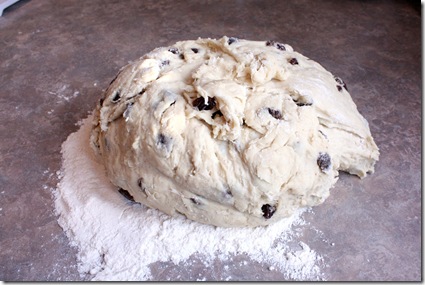 This looks like a shaggy mass but that is what it is supposed to look like. Just dump it out and start to knead 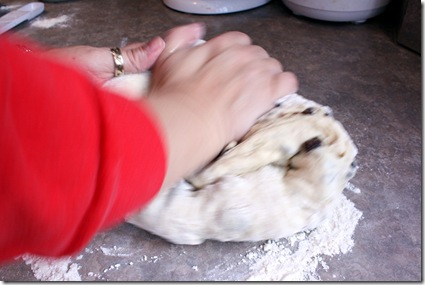 Work out your aggressions. Show that yeast what you are made of. Tell it whose boss. And do that for about 8 minutes. 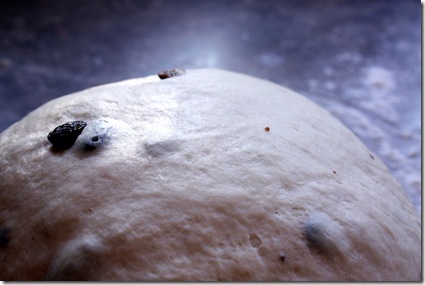 Work on it until is is lovely and smooth, like a baby’s bottom. Only this bottom seems to have some growths on it. Hmmmm. 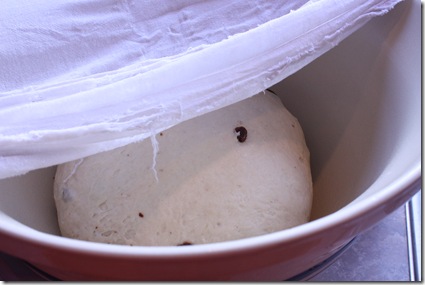 Then you put it in a greased bowl, cover it with a damp towel and put it in a warm and draft free place for the yeast to do it’s magic. I usually put the bowl in the oven with the oven light on. Nice and warm and yeasty in there. Just let it hang in there for about 1.5 hours until it is double in bulk, like I will be after eating more of this bread. 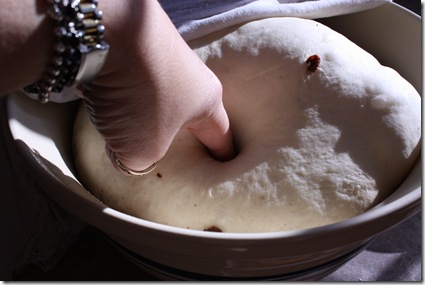 This is my favorite part. Sticking my finger in the dough to see if it is done rising. When you take your finger out, if the hole doesn’t fill in it is double in bulk. 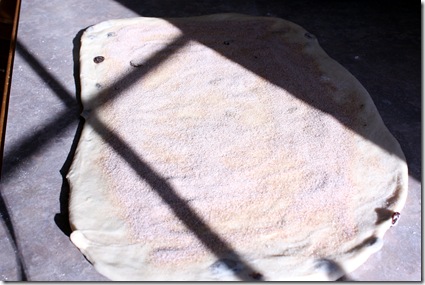 Sorry, right about the time I rolled the dough out the sun came out. How dare it! At any rate, you divide the dough into two pieces and roll them out on the counter and then you sprinkle them with a mix of cinnamon and sugar. Oh my mouth is watering. Then you roll them up starting at the short side. Pinch the edges together and put them in greased loaf pans to rise again. That takes about another hour. 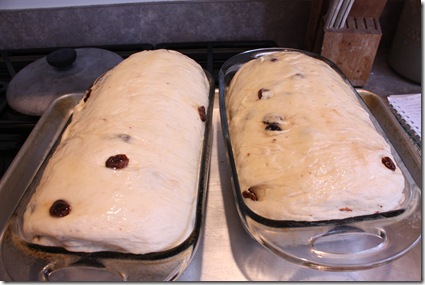 Once these lovelies are risen you then brush the tops with melted butter and pop them into a 375F preheated oven for about 40 minutes until….. 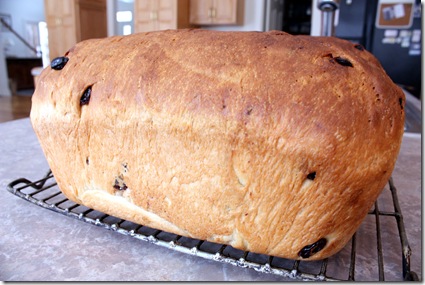 They come out looking like this. And they smell….Divine.

Combine the milk and water. Heat to 110-115F. Add butter and stir til melted. Add potatoes and cool til lukewarm.

Combine sugar, salt, yeast and 3.5 cups of flour. Put in the bowl of your mixer with the dough hook attached. Add milk mixture and mix until smooth. This can all be done by hand as well.

Stir in raisins. Gradually add remaining flour until a stiff dough forms. Dump the dough out onto a floured surface and knead until smooth and elastic, about 8-10 minutes. Place dough in a large, greased bowl. Cover with a damp cloth and allow to rise in a warm and draft free place until double in bulk. This takes about 1.5 hours.

Mix 1/2 cup sugar and 2 tsp cinnamon together and set aside. Divide risen dough into two and roll each piece out on the counter into an 8x16 rectangle. Sprinkle dough with the cinnamon/sugar mix. Roll the dough up, jellyroll fashion, starting at the short side. Pinch edges together and place the dough, seam side down, in two greased loaf pans. Allow to rise a second time for about 1 hour.

Preheat oven to 375F. Brush the tops of the risen loaves with melted butter. Bake 40 minutes or until the loaf gives off a hollow sound when the bottom is tapped.

Cool, cut and eat the whole loaf….unless the dog eats it for you.