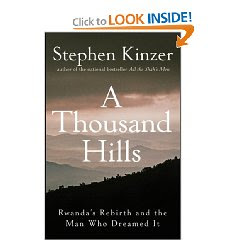 A Thousand Hills: Rwanda's Rebirth and the Man Who Dreamed It

By now most of us, I would think, know about the Rwandan genocide which took place from April 1994 through to July 1994. If you don't know at least a little about it, like who was killing who (Hutu killing Tutsi) then shame on you but that is food for another post. This post needs to deal with this really outstanding book that I just happened to find in the new books stack at the library.

A Thousand Hills is a complex book that deals with interconnected themes. Stephen Kinzer does a great job of describing all of the many separate details that led to the genocide. People didn't just wake up one day and decide to kill all of the Tutsi minority (which is how some have described the genocide). Never in modern history had so many people been killed so quickly. The fact is that it was long planned, that the hatred for Tutsi's was long standing and fed daily by the government. The signs for what was being planned were all there but no one was looking, or at least no one who could have done anything.

The book is a severe (and correct) indictment of the larger international community, the UN, USA, France, Belgium and other countries who could have done something to stop the genocide early on. But instead of helping Rwanda and those who were being slaughtered the international community not only turned their backs on what was going on but actively strove to make sure that no help was provided. It is enought to make you sick.

Of course Mr. Kinzer also gives a stark rendering of what happened on the day that the genocide officially began, April 6, 1994 and what followed in those first 100 days when possibly as many as 1,074,017 people were murdered. That is a hard figure to get your head around isn't it. In smaller terms that means that there were about 10,000 murders EVERY DAY, 400 murders PER HOUR, 6 murders PER MINUTE. Just take some time to think about that. And then add that most of the killing happened not in 100 days but in the first 30 days.

But what makes this book different from the other books that I have read on Rwanda and the genocide is that Mr. Kinzer provides us a look at what has happened in Rwanda in the years after the genocide. The changes and the strides forward and backward that Rwanda has experienced can be laid at the feet of one man, Paul Kagame. Throughout the book Mr. Kinzer has woven the story of Mr. Kagame who is the current President of Rwanda. Paul Kagame is a Tutsi who barely escaped the 1959 genocide and grew up as a refugee in Uganda. My job with this book review isn't to give you a blow by blow description of Paul Kagame's life, you will have to read the book for that. But my job is to tell you that without Paul Kagame, whether for good or for ill, Rwanda would not be at the point that she is now. He is strong, autocratic, does not take well to opposition. But his sole aim in life seems to be bringing Rwanda out of where she was and into a state of reconciliation to what happened in the genocide and to what this little country can be in the larger international community. Wether in the end he can succeed with all he wants to do remains to be seen.

The book is well worth the time that it takes to read it and was a great addition to my "Rwanda bibliography."
Posted by Debbie at 5:10 PM