Life is One Big Circle

Everyone who can knows what they were doing on that sunny Tuesday morning 11 years ago. I certainly know what I was doing.

Cartoon Girl and I had arrived home from our daily swim and were preparing to dive into the day. That was the year that I homeschooled my oldest progeny. Or perhaps I should really call it her “Unschool” year because I am not sure that there was as much hard studying going on as there should have been. And that wasn’t really all her fault. It was a laid back year.

We were home, I was showered and I decided that I should call SoccerMom (my cousin) who happens to have a birthday on September 11 (along with her younger sister. Oh the sisterly dynamics of THAT particular thing have haunted us all). It was from SoccerMom that I learned what had happened in NYC. And as we watched on TV we saw live the second plane hitting the WTC and all that came after. Hours and hours of horror and questions and fear and anger.

That was a day full of worry. Was Pilot Man flying that morning? Where was my brother-in-law The Viking? Was he OK. He was, having not left yet for a meeting in the WTC. 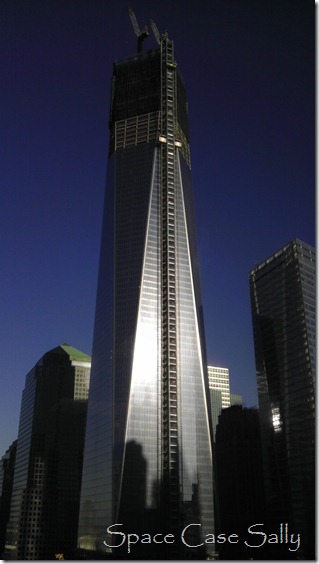 This is the view from Cartoon Girl’s office window. Right onto Freedom Tower and the WTC memorial site.

Life can be so circular sometimes.