To Bribe or Not To Bribe

To continue our week of why you might not want to travel with us.

I thought I would walk memory lane and tell you about a small encounter we had with the police while in Ghana. Really, it is best to avoid encounters with the police in foreign countries has always been my motto. And I have tried to stick to that…..

Except that sometimes it just doesn’t work out that way.

So, we were visiting Ghana, the guests of a large microfinance and banking group to view the micro-finance work that they are doing in country. Touring large and intimidating markets where they sell smoked fish and anything else that you could possibly need or not need. Walking through very poor areas. Watching where we walked.

Trying to resist the urge to buy very large snails for dinner. 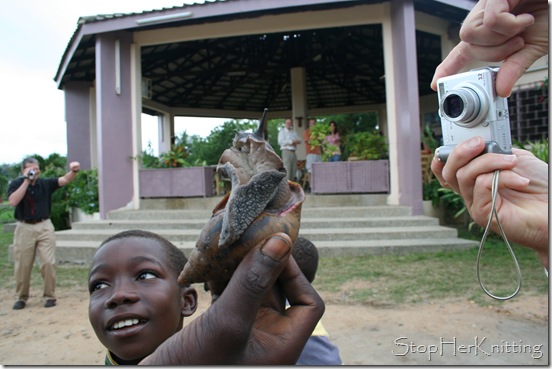 I am told that they are DELICIOUS when steamed to a lovely gray color then fried quickly in butter and garlic.

I will take their word for it.

And so we had made our way from Accra on the coast up to Kumasi in the central part of the country. We had toured the gigantic, and I do mean gigantic market in Kumasi. 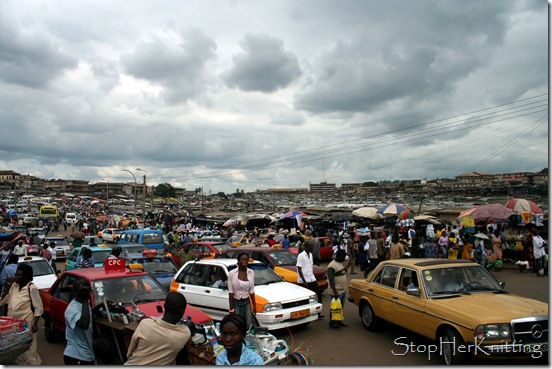 After a full morning it was back in the van for the drive back to the office and then to lunch. The traffic was terrible and we were moving at a snails pace so driver F. decided that he would take “a short cut”, a phrase that we long ago learned to fear because nothing good comes from taking a short cut in a third world country. This involved pulling off the main road and driving along the rutted area that ran along the left side of the road. This area didn’t seem to be a true road but more of a wide access area where you could drive if need be but where people had also, occasionally, set up little places where they sold things. There was a wall to our left that was actually the outside border of one of the markets in town. I could see into it through periodic openings into the wall where a road would go through.

There were very large ruts in the “road” with people walking there and the occasional stand where some were selling goods. All this made the going very slow and we were all wondering if we were actually supposed to be driving there. F. didn’t seem to have any questions about the validity of his actions. For F. it was all, “Damn the torpedos! Full speed ahead!”

We drove past a road that exited the market and crossed over the main road that we were trying to avoid. There was a traffic officer (not a true police officer but someone who just handles traffic) there who indicated to Frank that he needed to turn right and rejoin the traffic on the main road (which was totally clogged with cars/buses/taxis). F. continued on, ignoring the cop! The fellow took off after us and ran along side the van, pounding on the side and telling us (I think) to stop. We are all yelling for F. to stop but he just calmly drove ahead.

Damn the torpedoes! Full speed ahead!

F. finally did pull over and the fireworks began.

F. gets out. The police office dismounts and immediately is yelling at him, gesturing and pointing and REALLY upset. The traffic cop just stands to the side, not saying anything but smirking. This goes on for awhile and then P. and E. (organization employees) get out and the cop is still yelling and gesturing. They all moved over to the driver’s side of the van for more yelling and gesturing.

We are all a bit nervous by this time I can tell you. I might have been throwing off a river or two of sweat. I really wanted to take a picture but decided that I had better not. After about 10 minutes (which seemed like hours) of yelling etc. the front passenger side door opens and the traffic cop tells J., one of the people traveling with us, that he needs to get out and go and sit in the back. Then the traffic cop gets in the passenger front, P. and E. get in the back, F. gets in the drivers seat and we all follow the motorcycle officer down the access road and turn left into a walled compound that we quickly realized was the local police station and impound lot.

Man I love it when we make memories.

In an African country (albeit stable one), being taken to the police station is not good. Yikes!! The policeman directed us to pull up in a quasi parking area. F., the traffic officer, P. and motorcycle officer all get out and go over to an area where there is a sign that says “Charge Office” and disappear into a building, leaving us poor white people, along with Eunice, sitting in the van.

After a short period of time, which again seemed like hours, E. gets out and also goes into the Charge Office leaving us alone in the van.

PLEASE DON’T LEAVE US HERE!! WE DON’T SPEAK THE LANGUAGE. IT WASN’T OUR FAULT!

I want to go home.

A short time after that the traffic cop reappears and stops to talk to a group of other traffic cops, gesturing and pointing to our van occasionally, obviously telling them of his mighty deeds in apprehending the offenders.

Finally, P., E. and F. reappear. F. and the traffic cop exchange some friendly words, everyone gets back in the van and we leave.

P. explained that the police were saying that F. would have to pay a ¢500,000 fine ($50) which is a huge amount for the average Ghanaian but that really he wouldn’t actually pay anything and that eventually the charge would just “go away”.

Does the charge just take a vacation and never come back?

The traffic cop had actually gotten into the van because he hoped to negotiate a “tip” before we got to the charge office.

That would be a bribe to you and me. A bribe which F. refused to pay when it was suggested hence our harrowing trip to the police station. If he had paid the “tip” then we would have been sent on our way without further ado.

The wild thing was that the motorcycle cop had just been passing by when he saw what was happening. That isn’t his normal “beat”. If he hadn’t been there then F. would have just “out run” the traffic cop and nothing else would have come of it.

And then we went on to lunch, a bit late.

And of course, I had to have bottled water with lunch.

If there was ever a time when a beer with lunch sounded good.

It was that day.

Anyone care to go back to Africa with us? You never know what is going to happen.