How NOT To Start A Trip to India

As I mentioned yesterday, I have a theme this week. A plan. I am walking down memory lane thinking about some of the experiences HHBL and I have had as we have traveled over the last 15 years or so. You just can’t travel and not have those fun little things happen.

Or if you manage to avoid them you are missing out on TONS of fun!

I apologize in advance. This is long. But I don’t want you to miss a single minute of it.

So, in October of 2007 HHBL and I took a trip to India. Now that is a fascinating country! But it is a long way to go let me tell you. And at one point we worried that we weren’t going to get there. That we weren’t even going to make it out of the good old US of A at the rate that we were going at one point.

I should have known what the beginning of the trip was going to be like when we managed to leave a very important bag at home, the bag with all the gifts that we needed to give to people on the trip. We parked the car at the airport, opened the back, took out all the bags and realized…

Now I have to say that this wouldn’t have worked if it hadn’t been for the fact that our flight from Cleveland to Newark (the worst airport in the WORLD) was delayed. It wasn’t delayed too much but just enough that HHBL could make it back. But I was sweating the whole time cuz I wasn’t going to get on that plane without him. You can imagine my relief when I saw him sprinting down the concourse.

But the plane did not take off on time. Not by a long shot. But it was eventually airborne and we were thanking our lucky stars for a long layover planned into our travel plans. I hate long layovers but I was really glad at that point. That is until we finally arrived into Newark air space, only to be told that the weather over Newark was really bad and that we would be circling for a time. I could see the time just melting away. And then…..

Hello folks, this is your Captain speaking. We have some bad news. Newark is not going to let us land yet, and we need to top off the tanks so to speak, so they are diverting us to Syracuse where we will land, refuel, and then come back to Newark.

And just like that we knew that we weren’t going to make our connecting flight. Not by a long shot. We flew to Syracuse. We sat on the ground for an hour. 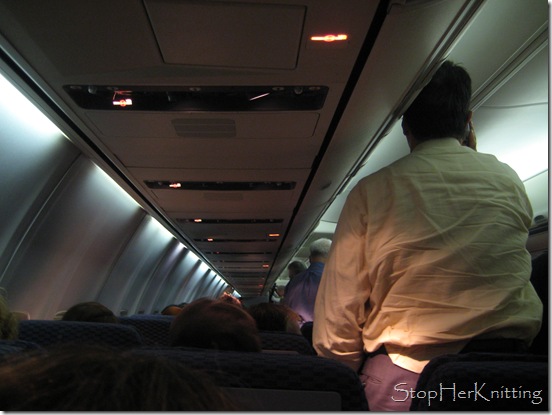 You can see the people standing up but you can’t hear the yelling. And there was yelling. And unhappiness. And sweat.

But finally we were back in the air and landing in Newark (the worst airport in the WORLD). It was late in the evening when we arrived, after 10p, and we couldn’t get our luggage. We all zipped out of the plane and zipped down to the Customer Service desk and got in line with all the other people who had missed flights. And there were a lot of them. And this was where HHBL saved the day again. While we were waiting in the line he got on the phone and spoke to customer service for the airline that we were flying on. They had already rebooked us…HHBL was flying out on Thursday (this was Tuesday) and I was flying out on Friday. HHBL explained that, no, that wasn’t going to be acceptable. It is good to have status on an airline. However, even with status we couldn’t get a seat on the next evening’s flight. But maybe standby.

And when we finally got to the head of the customer service line we were subjected to one of the worst instances of poor customer service that I have ever seen. We walk up to the counter when our turn comes. The customer service rep sighs, looks at us, tells us “I need a break. I am going to get an iced coffee. Just stay here.”

And walks off. And finally reappears after 10 minutes, iced coffee in hand, to tell us that he didn’t have a hotel room for us and we were out of luck.

And so we spent the night in the Newark Airport. No hotel room. No bed. No luggage. No food. No shower. 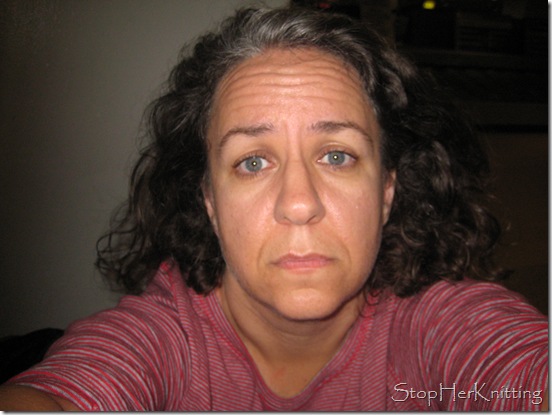 The Newark Airport at 3am is a very lonely place.

But finally, around 5am HHBL found a helpful ticket agent who got us a “day room” where we could get some sleep and a shower. And she put us on stand by for the evening flight to Delhi, with absolutely no expectation that we would actually get on the flight as it was festival season in India and every flight was over booked. But she told us to come back in the evening and give it a try.

We showered. We slept. We ate. We came back to the airport. Rechecked our bags and went down to the gate to see if we could get on.

And now I need to tell you something VERY important about international flights. It is what saved our bacon. Remember this tidbit. When you check in for an international flight and you go down to the gate you must show the gate agent your passport and your ticket. You don’t get on the flight if you don’t. And they give away your seats. Even if you have checked in at the ticket counter and checked your luggage through. If you don’t see the gate agent you don’t go.

And that is how we got the last two seats on that flight. There was a family who didn’t show their tickets and passports to the gate agents after they had passed through security. I don’t know what they were doing but they were no where in the gate area and when they did finally show up at the gate it was to find that their seats had been given away…..to us. Even as one gate agent was dealing with the yelling the other gate agent was hustling us down the gang way, closing doors behind us and vaguely motioning us to the right side of the plane and saying

There are two seats somewhere down that way. Middle seats. Please sit down as quickly as possible because we have to go.

I was still fastening my seat belt when the plane was pulling away from the gate.

But the story doesn’t end there. We landed safely in Delhi late the next evening. Our driver was there to pick us up. He had the address of our hotel, a small place called “Singh and Sons”. I won’t even describe the traffic in Delhi other than to say I was afraid I would die before ever having another hot shower. We pull up in front of the “hotel” finally. Boy is that a small place. We unload or bags and go into a very small lobby.

Very small. And there are only men in the lobby. And they are giving me the stink eye look.

HHBL is talking to the clerk and telling him that we have a reservation and the clerk is looking in the large accounts book in which they record all reservations and we are not in it. And I have a real hinkey feeling about this place. Something is not right.

This is Singh and Sons Hotel right?

No sir, the is Sons of Singh Hotel! (and I need to add it was a Moslem hotel and they so didn’t want me there).

Thank goodness our driver had stayed around outside to make sure that we were safely checked in. We put all the luggage back in the car. He got directions from the clerk who heaved a sigh of relief when I exited. And off we went again driving down this street and that. Crossing intersections. Avoiding the cow in the middle of the road. Yes, cow in the road. This is India remember. And after a time it was clear that we had missed a turn or fork in the road or something. So the driver needed to backtrack a bit. I would have turned around. But not our intrepid driver. He just throws the car in reverse and back three blocks backwards, avoiding the above mentioned cow again, back THROUGH a busy intersection and shaving about 10 years off my life before putting the car in drive again and finally finding the hotel.

I would have kissed the ground when I finally exited the death trap on wheels if I hadn’t thought I might get a really bad disease by doing so.

And that is how NOT to start a trip to India. I won’t even mention what happened when we took the overnight train from Salem to Chennai!