I take breakfast seriously. I think about it. I cogitate on it. I plan it.

One might think that I look forward to it.

HHBL and I don’t eat breakfast together. It isn’t because we don’t like each other and want to make googly eyes at each other over the table. We do.

Can you hear my progeny retching after that last sentence?

We don’t eat breakfast together because we eat it at different times. I get up before he does and I eat before he does. He is responsible for getting his own breakfast and I for mine.

I generally have oatmeal or Malt o Meal or Cream of Wheat or Cocoa Wheats.

But occasionally I have……..

To be specific, I have soft-boiled eggs.

I can hear the angels singing in appreciation of soft boiled eggs.

Who knew that the application of hot water and 3 short minutes could produce something so yummy. 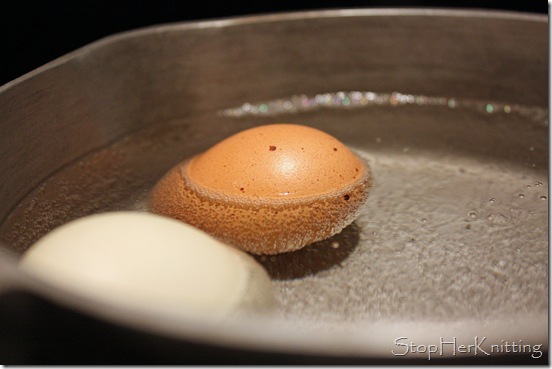 There they are all nestled in their bath. Really, soft boiled eggs are so easy. You just put the eggs in the pan, add water, bring them to a soft boil and then set the timer for 3 minutes.

No more than three minutes mind you or you will have hard boiled eggs. Hard boiled eggs have their uses in the pantheon of eggs. Picnics, Easter, deviled eggs. But not for breakfast. At least not here at Chez Knit. 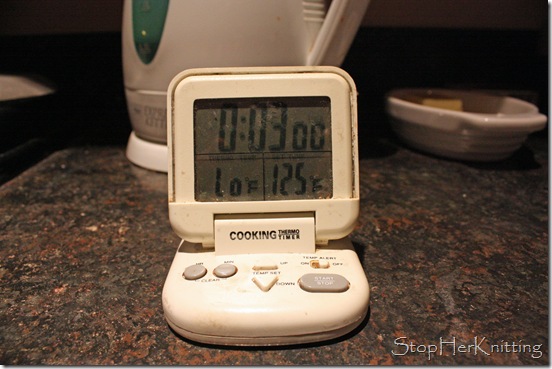 See, 3 minutes. Just waiting for the eggs to come up to the gentle boil.

Please ignore the fact that my timer doesn’t seem to have bathed for a long time. I forget to remind him and just like a child he doesn’t do it on his own. Sigh. Life is hard here.

And also please turn your head away from the fact that my counter seems to be rather on the dirty side as well. And we won’t even TALK about all the dust that I can see on the furniture since the sun is actually out and shining today.

I have more important things to do than dust.

I need to blog. 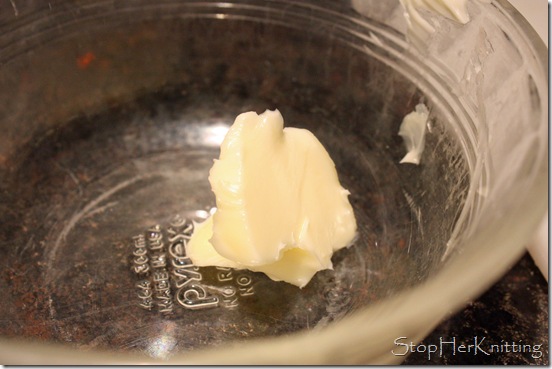 I must have my soft boiled eggs in one of those pyrex baking cups that have been around forever. This one sure looks like it has. That is how Mimi served them to me when I was growing up and I can’t have them any other way. They just don’t taste right. AND they have to have butter in them. Don’t panic, this is a close up picture and the butter glob isn’t as big as you are thinking it is. 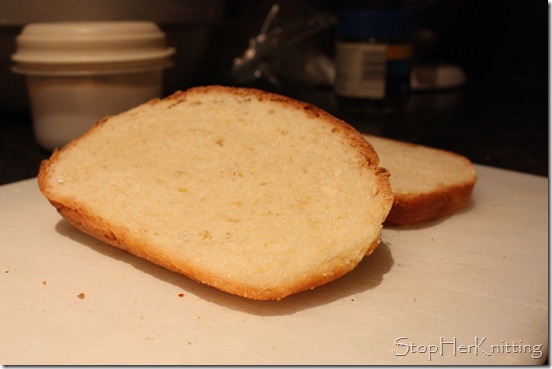 And then there is the homemade bread all cut and waiting to go into the toaster. When I hit the button on the timer then toast goes in the toaster. This is a finely choreographed breakfast ballet!

After three minutes the timer dings and I spring into action. Take the pan off the burner. Run the eggs swiftly under some cold running water to stop cooking action. 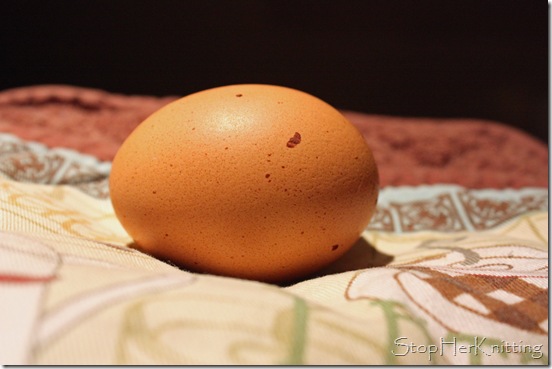 Take a knife and gently tap around the egg at the mid-point to break the shell. Swiftly pry the egg into two pieces over the pyrex dish. The yolk should be somewhat runny in the middle and just barely set around the outside with the white nicely set but not too firm and DEFINITELY not runny.

The shell, it is hot.

Scoop out the lovely, gently cooked egg with a spoon into the dish. At this point you must be extra careful that you do not also scoop out some of the shell. It is really a disappointment when you are relishing your soft boiled egg and you bite down on something crunchy that shouldn’t be there. Then, after you have the eggs in the dish you roughly chop them up with the spoon and give them a good stir to evenly distribute the butter as well as the salt and pepper. 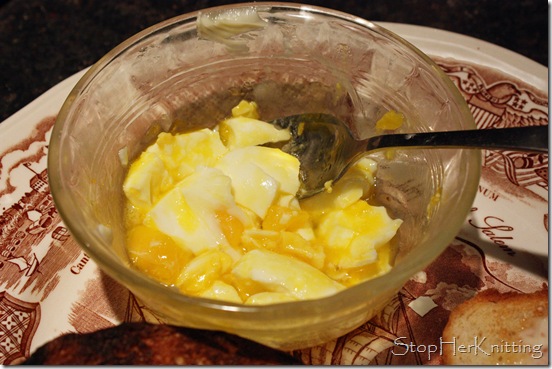 Wow Deb that looks yummy. But it looks like there is only one egg in there.

Yes, you would be right on that. The only thing that you cannot plan for when soft boiling eggs is the occasional…..

They all look the same from the outside. It is only when you crack that sucker open after cooking that you realize there might be a problem. And if you could have seen the second egg you wouldn’t have wanted to eat it either. One look at the color of the white, which wasn’t white AT ALL, and it was into the garbage with that one. I often get my eggs from a local “supplier” and that occasionally happens.

That is also why I always crack eggs into a separate bowl when baking. You cannot take out a bad egg once it has been added. I learned that the hard way. 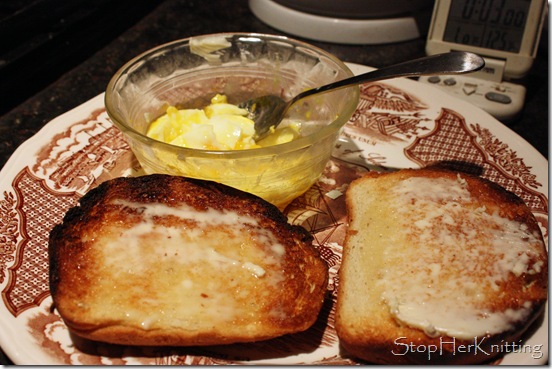