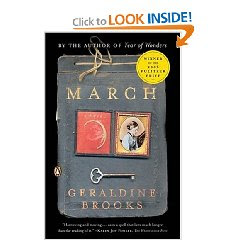 
OK, this was a book that my MIL recommended. She LOVED it. I HATED it. Can I say that again, I HATED IT. I don't really know why this book struck me so negatively but it certainly did. It is one of those books that I just wanted to throw it against the wall and walk away. I am sure that it is a good book and the reviews are very positive but for me it was just infuriating, sort of like that movie a few years back called "The Piano". Oh man don't get me started on that one! I digress.

"March" is the story of Mr. March, the father from Louisa May Alcott's book Little Women. A revered figure in literature, the wise, kind father who is wounded in the Civil War. Ms. Brooks "let her imagination run" (her own words) when imagining the life and background of Mr. March and to some extent Mrs. March. She based these imaginings on the real life of Louisa May Alcott's father Bronson Alcott a rather controversial figure. Mr. March starts life as an uneducated man just like Bronson Alcott, he travels in the South, he is a vegetarian, he participates in the Underground Railroad, he is a friend of John Brown, all like Bronson Alcott. I don't have any issues with that but imagining that Mr. March would also have "feelings" for a slave in the south, would be unfaithful in his heart (but thankfully nothing more) for said woman after he meets up with her again during the Civil War, would be not the strong husband and father that we came to know from Ms. Alcott's book but a weak and in my mind cowardly man who stands on his "convictions" to the detriment of others. That Mr. March and Miss Day (later to become Mrs. March) would consummate their relationship, out of the bounds of matrimony, OUTSIDE, after having met only two or three times. Oh give me a break!

I know loads of people have loved this book and if you have read it and loved it then that is great. But if you are looking for me to recommend it I am going to give you a resounding NO!!! Just go and read Little Women. In the end it is a much better use of your time.
Posted by Debbie at 2:38 PM