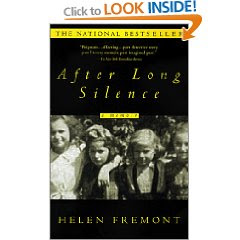 What would you do if everything that you thought you knew about your parents and their lives was a lie? Would you know it? Would you sense it?

Helen Freemont and her sister Lara grew up the children of Polish Catholic immigrants or at least that is what they thought they were. That is what they had been told. But something was always missing, something secretive about their parents. They went to mass but they didn't stay for communion and never went to confession because their parents told them that was an "American" part of Catholicism and not needed. Their only relative was their Aunt Zosia, their mom's sister, who lived in Italy. When they would ask about their grandparents they were told that they had died in a bombing raid.

But something was missing and after much discussion between themselves Helen and Lara decided that they must be Jewish and that their parents were Holocaust survivors. They researched, they wrote Yad Vashem, they followed up leads and they were right. But what to do with the knowledge. After agonizing about it they confronted their parents with what they knew only to be rebuffed time and again.

The book chronicles Helen's search for the truth about her parents and her parents story. How her mother survived the war by hiding as a Catholic, how her father spent six years in a Soviet gulag, what happened to her grandparents and other relatives. I don't want to give it all away. Some questions still remain unanswered and Ms. Freeman knows that that will never change. Her mother and aunt were in the end resistant to telling the whole story. In fact her aunt says that certain parts of the story have been wiped from her memory and can't be brought back. Still, a facinating story and well worth the read.
Posted by Debbie at 7:33 AM