For most of the winter I have been mulling over in my menopausal mind about my patio space. It is small. The footprint cannot be changed. There will never be a deck. Just a slab of ugly concrete.

I also watched the pattern of the sun and where it fell over the course of the day. Yes, I know that the sun pattern in the winter is different from the sun pattern in the summer. But I could at least get a feel for what was going to be the amount of sun vs shade. Was there enough sustained sun to be able to grow a few herbs and flowers? Time will tell.

I cogitated on what I should do about plants. I cannot actually “plant” anything in the ground because the ground doesn’t belong to me, well all except for that scant one foot of soil extending out from the house. And I can tell you if I took my shovel to that one foot space and dug it all up and put in a flower bed, well, I would get calls. And possibly strongly worded letters.

But, I don’t have to actually dig anything up to have a few herbs and flowers on the back patio. No indeedee. 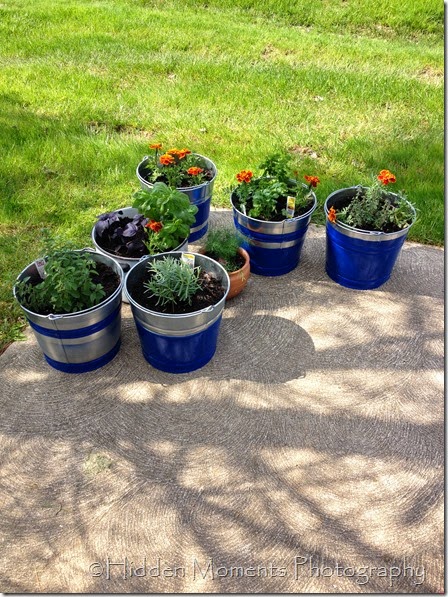 This is the beginnings of my bucket garden. Last year these galvanized buckets were a part of the decorations for Shoe Queen’s wedding. This year, planters! I love it when I repurpose things.

To be honest I had been thinking all winter about going in a different direction with this little space of mine. I was actually going to buy some square wooden planters. But each of those beauties cost about $30 and I really hated to spend that money. I hate to spend money in general….

Stop talking about the yarn. There is nothing to talk about. Moving on.

Oh, planters, that was it.

I didn’t really want to construct the planters myself, although I am quite capable of doing that. So I really was all set to spend that money but I wanted to make sure that there wasn’t something else around Chez Knit that I couldn’t use instead. And there they were, sitting on the shelf in the garage, just waiting to be used. On Monday I had gone out and bought some of the plants that you see here, despite the fact that it was still colder that a well digger bahookie in Montana. I also picked up some blue spray paint. Today it is lovely outside so I fired up my painters tape and got out the tarp and painted my buckets and planted my plants.

It is a work in progress. I don’t like that the buckets are all on one level, it offends my artistic sensibilities. But that can be worked out somehow. I will keep an eye open for something in someone’s garbage that will fill the bill. I really had to restrain myself from picking up that lovely toilet in the garbage around the corner. I love those things as planters. Oh wouldn’t THAT just be the talk of the next neighborhood dinner.

Dang, I might just have to do that. Someone, restrain me.

The next thing will be making sure that the four footed hordes deer don’t nibble. I think I am going to make a hot pepper spray and possibly some netting to go over them. It is them or me and I have the opposable thumbs so I am going to win.

And then there are also the bunnies.

When everything is planted and all is set I will take a better picture.