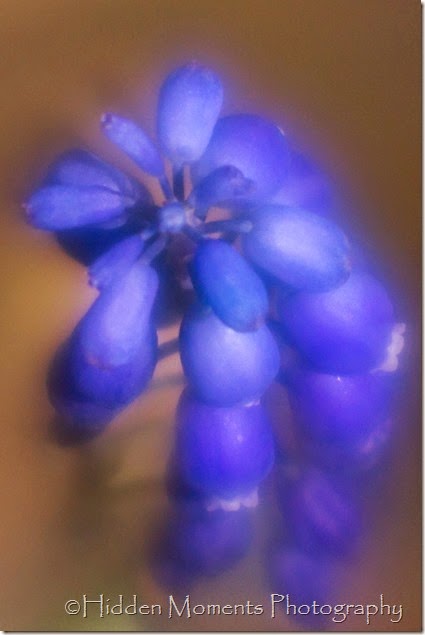 I am sure that the neighbors were burning up the phone lines a few weeks ago. The question would have been, “Why is Debbie squatting down in front of the Spirea bush by her front step?”

That is because there was a lone Grape Hyacinth waiting to be photographed.

I am ambivalent about these Spring flowers. Well, really, that isn’t quite true. I dislike them. Oh, I like them just fine during the short period of time when they are in full bloom. Our next door neighbors have their front walkway lined with Grape Hyacinth. A completely spell binding carpet of little purple flowers…for about 2 weeks out of 52 weeks per year. Then the flowers fade and they sort of go to seed and THEN, it just looks like they have an out of control grass problem running rampant through their front landscaping bed.

And the dang things seed themselves all over the place. I will admit that when they crop up in our landscaping beds I ruthlessly pull them up. The landscaping crew isn’t going to do it. Heaven forbid they pull something like a flower/weed. That would be almost as unheard of as their spraying for the deer.

But there was one glorious Spring day several weeks ago that found me crouched over the lone Grape Hyacinth that had escaped my purple purge. I didn’t bother with my tripod as I usually might have done, I just went spur of the moment.

A Reversing Ring and a stock 18-55mm lens on a Canon 7D body generally doesn’t lend itself to total spontaneity with macro photography, despite what all the videos on YouTube would tell you. I am much more meticulous when doing this kind of photography. There is a tripod involved and occasionally an added light source. There is patience and thought. There might even be a long pair of surgical tweezers (thanks Dad) to rearrange things to my liking. But not this time. This time it was grab Big Bertha and hope for the best.

And then there was the breeze.

In order to get this fuzzy and art house sort of photo I had to sway in rhythm with the flower.

Either I was doing a rather splendid imitation of a Cobra right before it strikes or I was acting out that last scene from Avatar. The neighbors will never know.

Email ThisBlogThis!Share to TwitterShare to FacebookShare to Pinterest
Labels: Macro