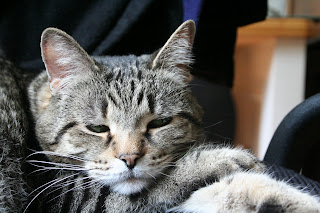 I have prepared this particular blog post in advance, knowing that the day that I will post it (10/20) will not be a day on which I could write it.

I have had to put my sweet Mr. Crabby Pants, aka Zachary Clarence, down. Even as I write that sentence he is still here with me, sitting at the back of my computer chair and trying to convince me that it is actually his chair and that I am intruding.

Zachary has been with us for almost 16 years. It is sort of like a marriage. You know that you had a life before he came but you really don't remember it. I had never intended to have a cat (let alone two cats). We had small children and that was enough chaos thank you very much. But one day my friend Brenda called. She had a huge favor to ask of me (uh oh). She had gotten a kitten from the local animal shelter to be a companion to the cat that she already had. It wasn't working out (and that was an understatement). The new kitten was sweet and loving (unlike the other evil kitty) but she felt that she had to find a good home for him because she had a commitment to the other older cat. Would we take Zachary, please, please, pretty please? Well what was I supposed to say to that. OK I said (VERY RELUCTANTLY), we will take him.

He has been the most wonderful cat through all these years. We almost lost him in 1997, Labor Day weekend to be exact, when he had a large (and rather expensive) medical crisis. The vet said we had bought him a couple more years but cats that had this problem didn't last too long. He sure proved them wrong. Zach has been like the Energizer Bunny, he just keeps going and going and going. He has brought joy, laughter, warm feet, cat hair on furniture, hairballs and so many other things into our lives. He has been my companion through many years, a move, illness. I will miss his insistence on being fed FIRST before I even make my coffee, his smell (think slightly musty and rather furry old man), his ability to know the minute I wake up in the morning, his incredibly loud purr that can intrude upon my sleep as he is staring at me waiting to be petted, his rather annoying love for eating pieces of yarn (with the resulting "poop on a rope" phenomenon) and so many other things.

But now the time has come to do what is hard to do, to make the responsible choice and have him put down. Animals have a "shelf life" though we do not like to think about that. He will not deal well with another move, he is beginning to have other health issues and his teeth are bad. So, today we will take Zach and our other cat Otis to the vet. We will say goodbye, we will come home and we will grieve.

Good bye my sweet Mr. Crabby Pants.
Posted by Debbie at 9:17 AM