One of my nightmares 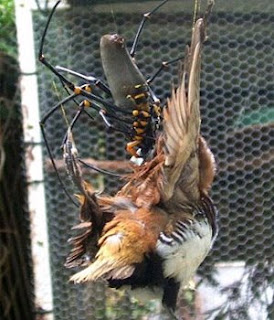 OK guys, this would happen to be one of my more basic nightmares. A spider that is big enough to eat something the size of a BIRD!!!!! This is was FOX News said about the picture

The image, which is being cirulated via e-mail worldwide, is real, according to wildlife experts, The Cairns Post reported.

The photo, believed to have been taken earlier this week, shows the spider clenching its legs around a lifeless bird trapped in a web at a property near Atherton, west of Cairns.

"Normally they prey on large insects, it's unusual to see one eating a bird," he said. Shakepeare said he had seen golden orb weaver spiders as big as a human hand but the northern species in tropical areas were known to grow larger.

Shakespeare said the bird, a chestnut-breasted mannikin which appears frozen in an angel-like pose in the pictures, is likely to have flown into the web and got caught.

"It wouldn't eat the whole bird," he said.