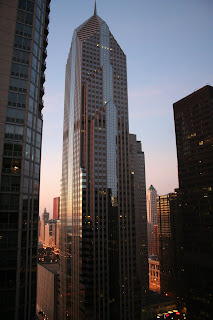 Sunday morning dawned clear and cool. We had been watching the weather for several weeks, hoping for temps that were neither too hot or too cold. It looked like it was going to be a good day, if perhaps a tad warm by afternoon. We were out the hotel door about 8:15a to try and find a spot to see Meg run by. Our first two tries were duds. We watched them run by at the corner of Wacker and Columbus but I think Meg had already passed by. It was hard to tell because the street is divided there and she might have gone by on the other side. Then we went over to mile 3 on LaSalle but missed her there as well. We were stuck on one side of the street and couldn't really see the other side all that well. We finally decided to dash across the street to the area in the middle where we could watch both groups of runners. We didn't see Meg but I got to see my mother nearly take out a runner. Yikes! When there are 30,000+ runners it is a big job to spot one person as they run by. 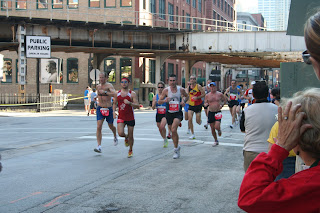 So, since we seemed to be running behind her we decided to find a spot further along the marathon route. That way we would be sure to see her. We had five pairs of eyes looking, how hard could it be (snort). We ended up at mile marker 12 on W. Adams. Even though we were fairly far along the route we still missed the front runners but were able to watch the more hard core runners go by as well as probably the front 50% of the runners. The first group we saw were really pounding the pavement. Very impressive. There was no way for them to catch the front runners (who run at about a 4 minute mile pace) but they were really moving. 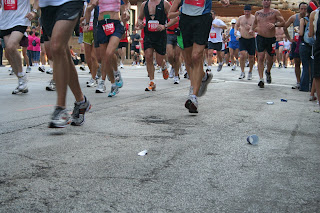 After the hard core runners passed we began to have a fairly steady stream of people, the big group. That is when you have to really start watching for your particular person. There are large groups of people and if you aren't on your game then your person will be by you before you know it. Thankfully we were right by one of the marathon clocks. We knew what Meg's half marathon time was and about what her per mile time was so we could guess when she might come by. 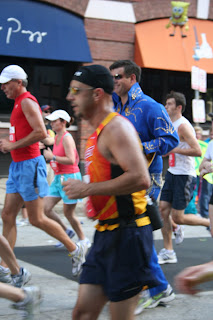 We had the joy of seeing Elvis run by. He certainly looks good for his age. 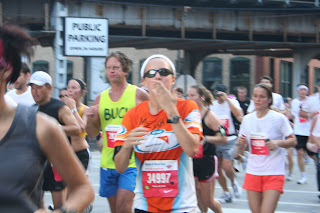 Finally at about 2:10 into the race here came Meg. She was looking good and moving well. We yelled and held up our signs and she was by in a flash. So, then we had a small amount of time to kill so we stopped by the hotel, wandered past the "Bean" and went down towards the bottom of the marathon route. LOADS of people all going the same place and looking for the perfect spot to see their person go by. We ended up finding a spot at Mile marker 26 on Roosevelt Rd. just before the turn back onto Columbus. We had to wait for someone to move away from the guard rail and open up a space for us on the street. But patience pays and fairly soon we had claimed perfect spots to be able to see Meg as she was in the home stretch. Her boyfriend, Josh, was stationed at mile 25 and would txt me when she went by. So we waited, and waited, and waited. It was an excellent place to watch people. We were close to the end of the race and many people running by were at the end of their strength. I saw numerous occasions where one person was helping another to finish. That was awesome. There were people running singly and people running in groups. The finish was in sight and we yelled on encouragement. 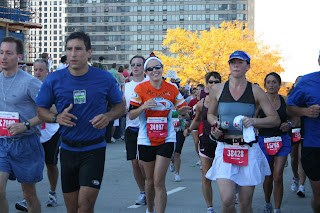 Finally, here she came, looking good for having run 26 miles. She was smiling, she was moving, she was waving. This was good. Her official Chicago Marathon time ended up being 4:34:44. She was 13,657th place out of 31,000 who finished. I think that is pretty darn good. 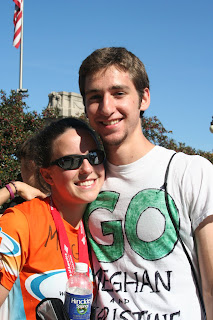