The Towers of Trebizond 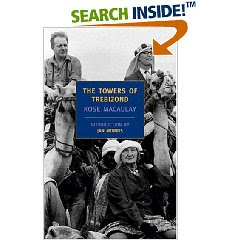 The Towers of Trebizond
Macaulay, Rose
Knitting Sticks: 2 (and that is being generous)


Well, this was a disappointment I have to say. I had high hopes and they were not realized. Sigh.

The opening line of the book is excellent. Who wouldn't be captivated by this opening sentence, " 'Take my camel, dear,' said my aunt Dot, as she climbed down from this animal on her return from High Mass." I thought, oh this is going to be good and parts of it were entertaining but on the whole it was one of those books where you work to get through it and you don't really like any of the characters and you don't get some of the references. You get the picture.

The Towers of Trebizond tells the tale of Laurie and her travels with her Aunt Dot through Turkey, Armenia, the Levant and beyond after WWII. Accompanied by the Anglican priest The Rev. Hugh Chantry-Pigg and Aunt Dot's camel (no name, just "the Camel") they embark on a journey for varied reasons. Aunt Dot wants to "liberate" the women held in ignorance by the Moslem religion, the Rev. Chantry-Pigg wants to convert the natives and scout out a site for a possible Anglican mission and Laurie wants to get away to think and assess her life (she has been involved in a 10 year long affair with a married man). I don't want to give everything away because you might possibly want to read the book some day ( I don't know WHY you would but you might) so I will just tell you that they meet various interesting people, have various somewhat interesting adventures, view lots of scenery and old ruins that are described in minute detail and the book ends on a less than satisfactory note.

Now it is on to a more exciting book, Tarzan of the Apes.
Posted by Debbie at 5:14 PM