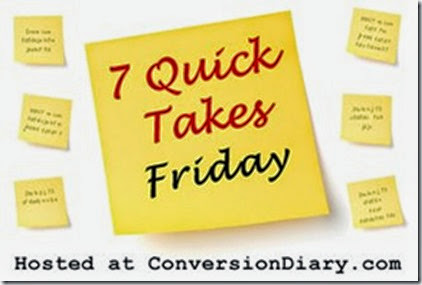 Hidey Ho, Neighbor! It is time for another edition of Quick Takes. You know the drill. When you are finished pouring over the mountain of blather here you need to click on the picture above to be whisked, at the speed of illegal immigrants crossing the border, over to Conversion Diary.

Blather that is consistently inconsistent.

1.
OK, I am going to confess…..I am not that big a fan of soccer, despite the fact that I have a cousin who is a college soccer coach (sorry Thom) and another relative who plays soccer professionally in Peru.

Baseball, as we all know by now, is my favorite sport.

But darn it if I haven’t watched what seems like endless hours of daytime TV in the last two weeks watching men run up and down a soccer field. And as play has gone on I have spent a boat load of time googling rules of soccer because I am completely ignorant of any rules and strategies of soccer other than you want the ball to go into the opposition net and you don’t want to get a yellow card or a red card.

And……..I may be changing my mind about all the “It’s so boring and nothing ever happens” thoughts that I have always had. It isn’t all that often that you get to see one baseball player try to take a bite out of another baseball player. There has also been a lot more blood than in baseball. AND in no sport here in the US would a player who obviously needs a head wound stitched up be allowed to continue playing while having said head wound held together with gauze pads and a jaunty little cap that looks like it had onions in it before being used to staunch the blood flow.

I feel like I am a stranger in a foreign country and don’t speak the language. My own private Marcus Brody moment wandering through the soccer market asking if anyone speaks baseball.

2.
As I sit out on my patio most days when it doesn’t rain (which wouldn’t be all that much this week as it has rained a lot) I am already planning for next year. Since this was the first full year of habitation here at Chez Knit I was not sure what the sun pattern was for the patio area. At OCK the sun pattern was some sun and no sun. Never enough sun to actually grow things like Million Bells (a favorite) or geraniums or even a tomato plant. It was hosta all the way.

But the patio at Chez Knit gets sun for most of the day, from early in the morning till mid afternoon it is full sun, then there is a bit of shade and then full sun again. My flowers are very happy happy joy joy. My Million Bells are belling. My single tomato plant is setting blossoms. The herbs in the pots are growing like crazy.

So, next year I am thinking about actually investing in longer wooden planting boxes that will line the edges of the small patio. That way I can actually plant a few more things, say more tomatoes or a bit of lettuce, and still be within in the whole “you can’t make any permanent changes” clause in the homeowners association rules.

We will see. I have to get through this year first.

3.
Tonight is the last wedding in our “Six weeks of weddings”. First there was this lovely couple…. 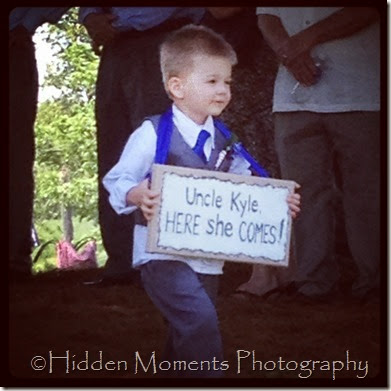 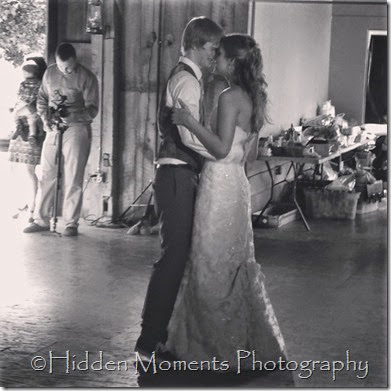 Kyle and Katie were married on Memorial Day. Loads of fun, food and friends.

Then Marin and Nick (our latest pre-marital mentoring couple) got married 6 days later….but I don’t have any pictures of their nuptials as I had to miss the big day to go out and help at the cottage. HHBL went for the both of us. Poor guy. He knew no one other than the bride and groom. That is until he was walking into the reception hall when he heard his name called…….. 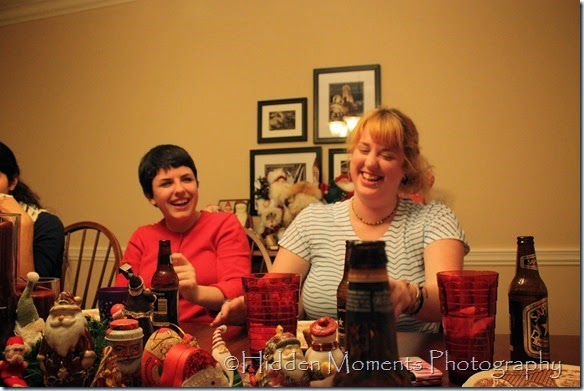 It was Daughter Ahren. In all our pre-marital mentoring sessions we some how missed the fact that Nick had step-siblings……and one of them happened to be Ahren, who also happens to be one of Cartoon Girls best buds.

And finally we have the wedding, this evening, of Jason and Samantha. Jason is the son of one of my sisters of the heart…. 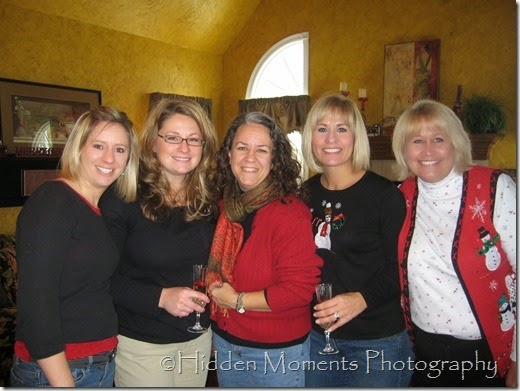 Dottie is all the way to the right. She is SO excited to be adding a daughter-in-law to their crazy family mix. It is going to be a joyous night.

Now if HHBL’s voice will just hold up.

4.
After Max the Magnificent’s evening walk last night I blithely put the garage door down and heard…..

Oh dear, that didn’t sound all that good.

The garage door here at Chez Knit has been the source of some consternation for me since we moved in. First there were the repairs that needed to be made to the gear that actually works the chain. That had to be done by a “professional” and also resulted in my pulling my back out while physically lifting the door up to release Coco from her garage prison. Such fun.

Then there was the time when I put the garage door down, heard an ominous sound, tried to put it back up and realized the one of the pins that helps the garage door ride up the track had come out, well was actually cattywhumpus and all “No I ain’t goin’ up”. So I man handled, or should I say woman handled that thing back into place with the judicious use of a hammer and some rage.

And now this. As I stood there, trying to calm my heart and internally going nonononononononono! I noticed that the metal arm that attaches the garage door motor and chain to the door itself was swinging free like an aged hippy without a bra on (awesome picture!)

I took a look and realized that nothing was actually snapped off. The screw that holds the arm to the door had come undone. The screw itself was still in the door….but no nut to go with it. And after diligently searching down in my work area I didn’t have a nut that was the right size or shape to fix it.

Insert second set of expletives here along with a slightly pornographic joke about nuts.

So it was back up to the garage with one of the bazillion flash lights gleaned from my fathers storehouse of flashlights to look around for the errant nut…..which thankfully I found under the car. Which resulted in my having to shimmy under said car to reach it. Which then necessitated the bring of the tools up to the garage to fix the door. Which was accomplished in record time and without any more expletives.

5.
I am embarking on trying new recipes. I have been in such a rut of recent days. This most likely stems from the fact that there are many weeks when HHBL or myself are not home for dinner. So when I do cook then I just fall back on the standard recipes.

I am tired of doing that. And I don’t want to end up with a HUGE box full of clipped recipes that I haven’t ever used, or more likely a HUGE Pinterest board full of recipes that I haven’t used. That just goes against the “use it or say goodbye” zero sum game that we have going on here at Chez Knit (which does NOT cover yarn, just so we are clear on that).

This week I tried out a recipe for Angel Biscuits (had both yeast and baking powder for leavening) and am completely in love. If you could see how many of those things I have consumed in the last 48 hours you would understand.

I also tried out a recipe that was billed as “The Best Roast Chicken Recipe You Will EVER Have”….ummmmmm, not so much. It was OK but different. I may try it one more time before saying bye bye to it or I may not as it was definitely underwhelming.

Who knows what I will make next week! Well, Shoe Queen and Slim Jim are coming for a visit and it is a holiday weekend so I may fall back on standards……but the week after that is fair game. 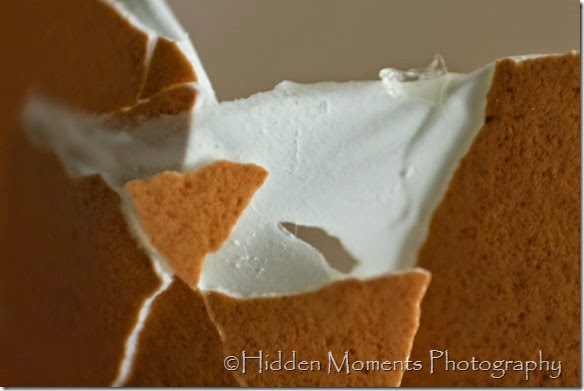 I had my breakfast of soft boiled eggs and Angel biscuits….and then was overwhelmed by the thought that I had to take a picture of the shell.

But only after I actually ate the contents.

A bit of frustration with focusing, which is difficult even when using a tripod. But I persevere.

7.
My Instagraming has been pretty light this week. But here you go….. 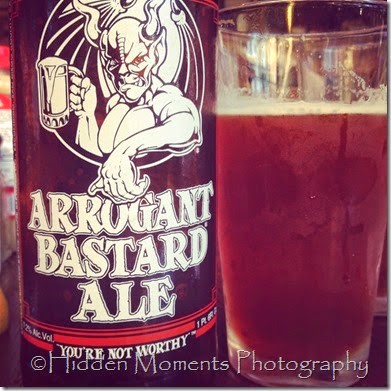 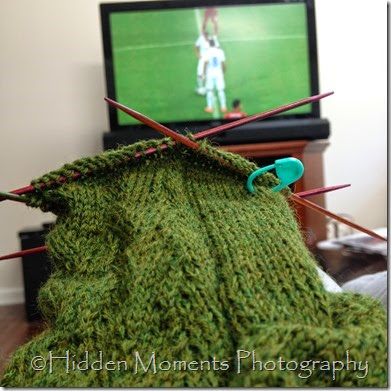 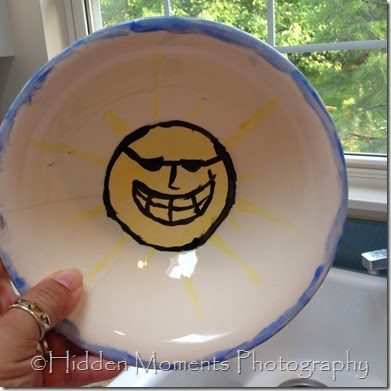