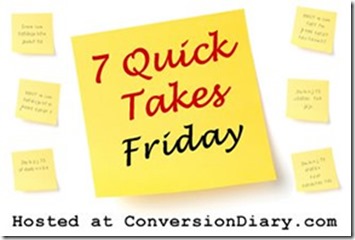 Holy Spitballs Batman! How did another week just fly by? You know the rules. When you are done diggin’ the blather here you need to click on the picture above to be whisked, at the speed of the weeds growing after the rain, over to Conversion Diary to see what is going on.

Now get out there and BLATHER!

1.
These days I rarely watch TV unless it is something on Netflix or a DVD. The whole “we don’t have cable” thing remember. But yesterday evening, as I was waiting for the San Antonio/Miami game to start I spent some time watching the channel that shows old re-runs.

Oh my gosh I forgot how I loved old TV shows from the 1960s. I watched an episode of “I Dream of Jeannie” and “The Mary Tyler Moore Show” and “Bewitched”.

So dated. So hilarious. So much fun.

I wonder if I can get those on Netflix? 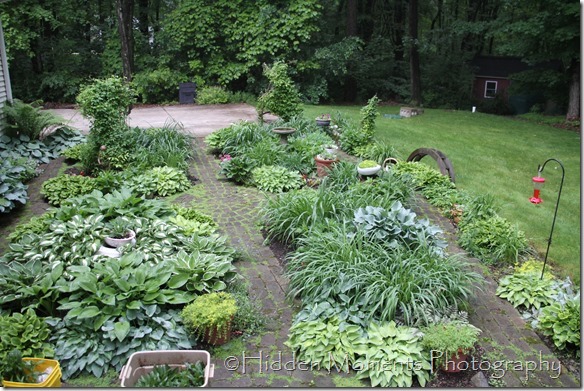 The back garden is in full on mode. In about two weeks the clematis in the upper left corner of the picture will be covered with little purple blossoms.

The Day Lily are setting their blossoms which means that I am out there spraying them to keep the flower decimators deer from eating them.

Peace reigns in the garden.

Except when I see Max lifting his leg on my basil plant. 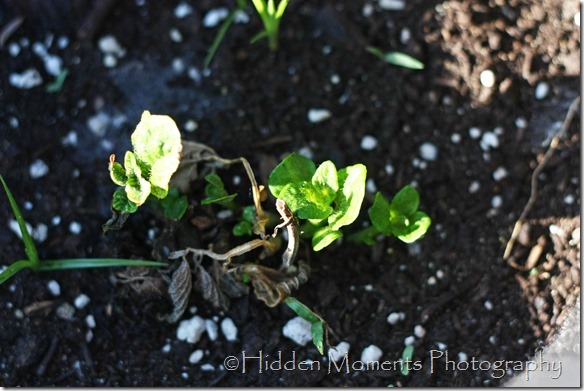 After the unexpected frost two weeks ago, LaurenLeap and I thought that our “reclaimed” potato plants had bitten the dust. All the foliage was all horribly wilted and translucent, just as if the plant had been killed by frost.

I say “reclaimed” because we actually had a bunch of potatoes sprout in the compost pile and we didn’t want them to go to waste so we dug them up and replanted them in one of our potato pots.

So imagine our delight when we discovered on Tuesday that for the most part the plants seem to have survived and are sending up new leaves.

And today we plant more potatoes in the burlap potato pots that I sewed. I will keep you posted as to their progress.

4.
We had a full day of rain yesterday.

Not only was the ground watered and the plants made happy.

My rain starved heart was watered as well.

If I could set the weather schedule for the summer (are you listening God, this is Debbie), I would say that Sunday, Monday, Tuesday, Wednesday, Friday and Saturday would all be sunny with fluffy, white clouds and 75F tops. It could rain at night, after 9p with an occasional thunderstorm.

But Thursdays would be reserved for a all day rain, sometimes gentle, with perhaps a thunderstormy day every few weeks.

5.
Look who was wandering around underneath my office window the other day. 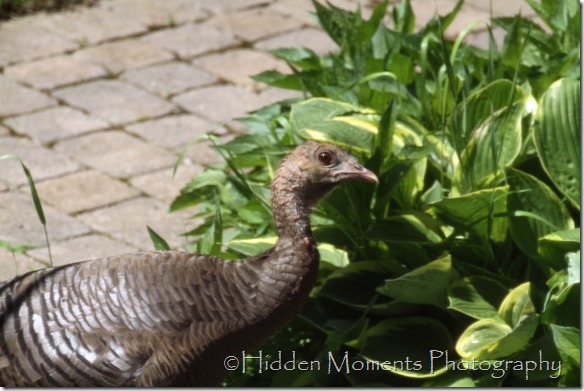 Turkey! So intriguingly ugly. She clucked and pecked for a good 10 minutes as I quietly took some pictures. Then she realized I was there and moved off down the driveway and into the woods.

She was alone, which is their habit during the summer months. I would suspect that she has some little ones that she stashed in the woods.

The pictures don’t do her justice as they were taken through my “light limiting” screens so there is a hazy quality to them. Her feathers are actually quite lovely. They are so smooth and have a sheen to them. She looks like she would be very soft to the touch.

Of course she might peck my eyes out if I tried but I can dream. 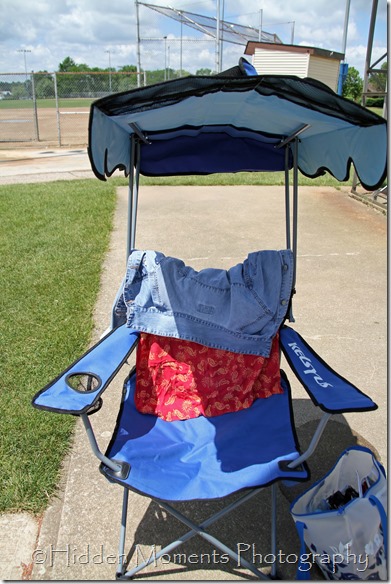 I have a new chair to take to HHBL’s baseball games. It is ridiculous how excited I am about a chair with it’s very own awning attached. In years past if it was very sunny I had a small umbrella that I held over my head to get some shade and relief from the blazing orb.

There is only one small detail about this chair. When it is very windy, if I arise from my seat, the wind will quickly pick the chair up and flip it on it’s side.

Do you know how I know?

Because earlier in the game I had left my seat to take a picture of my chair with my iPhone. And even as I snapped the picture the wind grabbed my chair and tipped it over and at the same time spilled half of my travel mug of coffee onto the seat.

But I still love my Throne of Games

7.
The work in the community garden is ramping up. By this afternoon LL and I will have the tomatoes and peppers and basil in the ground. The Brussels sprouts are already in. The first planting of beets is up. The lettuce is about to get it’s first harvest and the spinach is producing quite well.