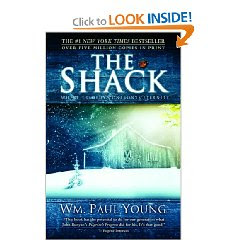 Knitting Sticks: 1 (and if I had a zero category that is what it would be listed as)


Well, what to say about this book. First of all, if you loved this book and think that it speaks Christian truth the you might want to stop and go no further. Especially if you are a friend, I don't want to offend you but I can tell you right now that I am not going to write a favorable review of this book and that is an understatement. So just be warned.

I tried to come to this book without any preconceived notions of what I was going to find. It was on loan from a friend who had raved about it, a Christian friend whose opinion I value. She loves this book so much that she has her own copy and then went out and bought several other copies that she could lend to friends. Several people had sent me reviews and commentaries on the book but I hadn't read any of them, I just put them away for later. I did know that people seemed to hold extreme views on the book, either loved it or hated it. Obviously people loved it because at the time that I am writing this review "The Shack" has just entered it's 41st week on the NY Times Bestseller list (not a recommendation in my mind but whatever). Thank goodness I didn't actually pay for the book.

Perhaps it is best to start with a bit of background. There are spoilers coming up so if you are thinking to read the book (please DON'T) then you might want to skip this. The book deals with Mackenzie "Mack" Allen Phillips, the brutal death of his young daughter, his relationship (or lack thereof) with God and a weekend spent in the shack where is daughter died, having been invited there by God who sent him a short note in his mail box. There he meets the Trinity -God represented by an African-American woman, Jesus as a Middle eastern man and the Holy Spirit as an Asian woman. I tried to overlook the physical descriptions, I do think that we cannot view God as a white man or as a black man or Indian or anything like that but to have God speaking in ghetto vernacular or what I think of as "slave speak" is just beyond even my formidable imagination. And if that were the only thing wrong with the book I would be happy!

In this book God is too personal and not all powerful. Yes, God is a personal god who walks beside us and loves us but he doesn't cook us greens and then tell us to be careful how much of those we eat so that we don't get "the trots". That was just a ridiculous passage. The book focuses on God's love and nothing else, falling into the "God is love" trap and ignoring all the other, equally important aspects of his nature, aspects that are EQUAL in His nature. To have "love" be dominant is to put things out of balance and put God in an imbalance and therefor not perfect. Yes God is a god of love but he is also a god of justice and mercy and wrath and healing and so many other things. To say he is just a god of love is to diminish who and what he is.

Mr. Young portrays a God who is personal but all too human. If god were as he is portrayed them we would have NO awe of him. That which is treated so familiarly is that for which you loose awe. If we have no awe of God then we have no respect for him, for who he is and for what he has done for us.

Jesus, portrayed in the book as a middle eastern fellow who likes to work with wood (cough, cough), who tells Mack that he is "perfectly human" because he chooses to live that way. God also tells Mack that He never left Jesus on the cross, that regardless of what Jesus "felt" that God never left him. Hmmmmmm. Now, you can tell me if MY theology is wrong but Jesus and God are one, God cannot dwell with sin, Jesus BECAME the sin of the world in order to save us, God could not be there when Jesus WAS sin. God did leave. Look at Matthew 27:46 and Psalms 22:1.

God tells Mack that Jesus healed people "as a dependent, limited human being trusting in my life and power to be at work within him and through him. Jesus, as a human being, had no power within himself to heal anyone." Hmmmmm again. I might point Mr. Young to Philippians 2:15 and remind him that Jesus is both FULLY GOD and FULLY MAN. Not one or the other but both.

I know that some of you may have read the book, loved the book and are going, "But Deb, it is such a good story. I cried and cried at the caring and forgiveness and love that I found there." Yes, I will agree that you will find those things there. But I think you also need to remember that to base what you think about a book on emotions is a dangerous thing, especially a book like "The Shack" which is dealing with serious matters. Emotions can deceive, you can be overwhelmed by the emotions elicited from the book and fail to give a thorough look at what is being said on a deeper and more theological level. But you are still taking in what the book said, you are still reading and not giving clear thought to these ideas that are just not biblical or theologically sound.

I do have to be honest and tell you that there were some things that I did agree with, only a few mind you but there were some. I would agree that God is a relational god, that He is not to be found in buildings and institutions but in a personal relationship with Him. But what we know about God is what He reveals to us through His scripture and not what we conjure up about him.

OK, I could go on and on believe me. I have PAGES of notes but I think I had better stop. If I had my "drothers" I would tell people not to bother reading this piece of theologically twisted drivel. If you have to read it, read it with your Bible right next to you because you are going to be going, "But wait! that isn't what the scripture says!". And that, in the end, is the most important thing.
Posted by Debbie at 10:14 AM