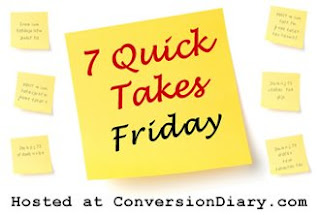 Whoopee!!! It is Friday again and time for another series of pithy quick takes. Man, I need to get out more. Just click on the picture above to go on over to Conversion Diary to see what everyone else is up to.
-1-
OK all, I am going to brag on my oldest daughter who is a cartoonist. She is finishing up her senior year at the School of Visual Arts in NYC and is very talented. You can go here to see her latest work which are illustrations for a story in Slate which is an "online" magazine. Just a warning in advance. Do I have your attention now. The first illustration has nudity. It was at the request of the author of the article so she did her best with it. I wouldn't want anyone to go over there and get an eye full of something and be surprised. Ah the talents that art students develop. Someday perhaps I will write about the first time that she had to do a sketch of an, "actual, real, live, NUDE person Mom! He just came in, put down his latte and dropped trou!". That thought still makes me laugh. 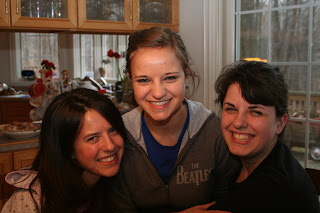 Hurrah!! As of Sunday night I will have all of my girls home for an entire week. That means increased noise, ten thousand used cups scattered around the house, snacks on the shelves that we never buy any other time (poor Beth), tons of laughter, perhaps some yelling, bickering about the use of the car, discussions around the dinner table, did I mention the noise level.......and I will love the whole week. It isn't all that often that they are all home at the same time and this may be the last time for a while. The oldest will be graduating from college in a few months and will then be out on her own (not that she isn't now because she is). The middle progeny will most likely be doing work/study in Africa in the fall so we won't see her until after Christmas. So I am going to make the most of the time, just sitting back and soaking in all the sounds and laughter. 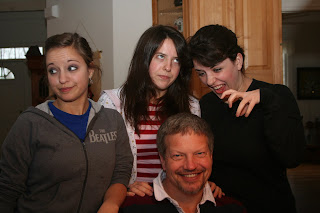 Of course, there are plenty of times when this picture is more representative of what is going on when everyone is home but..........

-3-
Do you plan out your weeks menu in advance? You would think, when the girls were younger (read 3 kids under the age of 5) that I would have spent more time doing this. I mean, it might have been helpful during those years when I was barely keeping my head above water most days. You know the old adage about the duck swimming peacefully on the surface of the water but paddling furiously underneath. Well, I didn't plan meals ahead when the girls were little. I didn't plan meals ahead when the girls were older and I was working outside the home. I must have been nuts not to do this simple thing. NUTS I tell you. Well, with age comes wisdom (maybe) and for the last few months I have been spending a little time at the beginning of each week planning what I am going to make for dinner. My word, what a wonderful concept. I just look at my day planner in the morning and see what I am supposed to make. No more standing in the middle of the kitchen at 4:30 or 5p, scratching my head and wondering what I am going to make and if we can have pancakes again tonight.

There is an added benefit to this planning. I am actually managing to get through some of the recipes that I keep ripping out of magazines and sticking in my "to try" recipe file. Do you have one of those files? I love mine. I open it with anticipation, wondering what I might want to make, thinking about how a recipe might taste, wondering if I might want to change something. Oh the anticipation just gives me shivers. The thing that you do have to remember if you keep one of these kinds of files is that you actually have to go through it every once in a while and either make some of the recipes or throw some out. I started collecting recipes in the 1970's and just kept on collecting and collecting and never discarding. Several years ago, when I was cleaning out one of my file cabinets I came across this file. After having a big hearty laugh at some of the recipes and the ingredients there in, I threw most of them out. It was sad but it had to be done. Now, I try to make sure that a recipe doesn't stay too long in the file. I make them, judge whether they are worthy to make again and then either put them in my permanent recipe box or pitch them out.

-4-
I sent off two more pairs of socks for Socks for Soldiers this week. Of course, I don't have a picture of said socks because I forgot to take one and didn't realize it until the box was all packed up. I just wasn't going to undue that packing job just to take a picture. So, no picture.

I found this group in July when I just did an off hand Yahoo search for groups that knit socks. I wasn't looking to specifically knit socks for soldiers I was just looking for a group that knit socks. WOW did I find a great group of knitters. They are a dedicated, funny, helpful, marvelous group and I have been so blessed to be able to participate. If you want to know more, if you want to knit socks for soldiers who really appreciate them, if you are looking for some place to plug in and say thank you then we are the group. You can find out more here and here. I can't express to you how much pleasure that it gives me to knit these socks. I have a chance to pray for the soldier that they will go to as well as his family. I don't know the soldier's name but that really doesn't matter because God does.

In the past I think the problem with my long term goal setting was that I tried to bite off the whole thing in one mouthful. That is a bad idea for me because then I lose steam, lose interest and wander away to do something else. Think Prissie in Gone With the Wind, wandering along talking to herself about what she is supposed to accomplish but in the end throwing up her hands and declaring that, "I don't know nothin' about how to accomplish that long term goal."

Perhaps when setting the steps toward long term goals my mantra will be "I'm baby steppin', I doing the work!". Those of you who know your Bill Murray movies will get the reference to one of my favorites, What About Bob.
-6-
I have been keeping up (sort of) with my "read through the Bible in a year" plan. I say sort of because there are days that I miss so it will be more like a year and a half before I am done. But I have to say that I am really enjoying this so far. Remember the old goal setting thing from #5? Well, this is one of those long term goals that I have always said I would do and perhaps once or twice made a stab at but never completed. It is only March and there is still a ton of time in the year to go but I have some hope.

When I embarked on this reading plan I decided that I wouldn't do anything other than just read the word of God this year. Just enjoy the Bible, not using my usual raft of commentaries and other study materials. Just read and allow the Lord to show me what he wants me to see and learn. It has been a liberating experience in a way. Just me and my Bible. Of course, when I get to Leviticus then I might be singing a different tune.
-7-
And on the whole goal setting note, I will leave you with a quote that I found yesterday that I think expresses some of what it takes to meet long term goals. This fellow was an athlete, a soldier but not necessarily a nice guy.

Now if you are going to win any battle you have to do one thing. You have to make the mind run the body. Never let the body tell the mind what to do. The body will always give up. It is always tired in the morning, noon and night. But the body is never tired if the mind in not tired.
Gen. George S. Patton