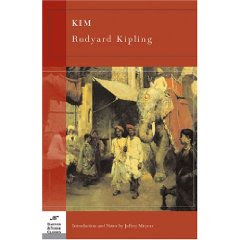 I have a "Classics Challenge" book list that I keep in my books database. Whenever I come across a book that is considered a classic it goes on that list, after some consideration as to whether I want to read it or not. Kim happened to be one of the books on the list.

I have to say right off the bat that I very much enjoyed the book. It seemed a tad slow starting but I kept at it and was rewarded for my patience. Basically it is the story of Kimball O'Hara, the son of an Irish soldier who grows up in India. His mother dies when he is born and his father dies when he is a young boy and he is ultimately left in the care of an Indian shop keeper of dubious character. He essential grows up as an Indian boy until the age of 13 when he steps onto his road of destiny and his ultimate participation in "The Great Game".

I have to ask myself if my view of the book and my enjoyment of it would be different if I hadn't spent a short amount of time in India. There were times when I was reading that I could see and smell and taste India. The overnight train crowded with people (we took one from Salem to Chennai, the only non-Indians on a train with 2000 people), the train platform crowded with sleeping figures, the clink of many bracelets on the arms of women, the sounds coming from the street, the descriptions of the land. I was right back there.

I can well understand why this book would have appealed to young men around the time that it was written, 1901. It is full of adventure, mischief, danger, freedom from responsibility, great deeds, honor and brotherly love. All those things that seemed to appeal to young men in the days when they weren't consumed with being "cool" or playing their video games. Oops, sorry for the rant there.

Anyways, I liked the book and it may require a second read at some point in the future. India is a land that is very modern in many ways but also unchanged from the last centuries. This would actually be a good book to read before going again.
Posted by Debbie at 2:55 PM