Bitty Bits of Blather - All Over the Place

Look what I am bringing you!! Bitty Bits of Blather, which I haven't done is a boat load of time.

Can you have a boat load of time? Hmmmm.

At any rate, I am currently sitting in a hotel room, wrapped up in the bedspread and trying not to think about what might be ON the bed spread and if they have even washed the bedspread. The room is alternately just right and freezing, depending on where you are sitting. I have my feet propped up on the coffee table which puts the toes right in line with the A/C blowing, so I am wrapped up. Just what you want when visiting Arizona....to be cold.
Blather that is way better than watching a political debate.

1.
Yes, we are traveling in Arizona at the moment. HHBL is speaking at a conference for the next day or so. I will actually be holed up in the hotel room today, cranking out work. I generally don't like to spend an entire day in a hotel room. It isn't a terrible hotel room but it isn't the Ritz either. Yes, I know what a Ritz Carelton hotel room is like cuz I have stayed in several. THAT is a story all by itself. Let me tell you that a RItz Carleton, especially up on the "Club Floor" is an experience like no other. Can you say, "Cookies all day long"? Can you say, "A room with TWO king sized beds and a balcony where, if you sleep with the doors open, you can hear the ocean waves clear as day". Can you say, "You can only get up to the floor if you have a special key for the elevator".

But it will be fine for the next three nights.

Oh my goodness. Why did I not know. How could I have missed. I have to back up a minute. I think sometime back I told you that one of my goals is to have played all of the music that I have in iTunes at least once. To have a "1" in the Times Played column. I have A LOT of music and so this is a big undertaking. But, I also work in an open office environment which means that at least some point during the day I have my earphone in so that I can concentrate on work and not hear the phone calls and conversations. So when that happens I open up iTunes, switch to the "Songs" view and look for music that doesn't have a number of any kind in the "Plays" column. That is how I came last week to be listening through an album (did I just date myself?) called "The Canadian Tenors" by The Tenors. I THINK that this particular album is one that came from my dad, it sounds like something that he would have liked, but I cannot be sure. The one thing that I do know is that I didn't buy it. I didn't even make it through all the songs before I went and purchased two more albums worth.

Total musical obsession.
You can thank me later.

3.
A bit more on the FitBit. I both hate and love the thing. I hate the fact that it just hangs out on my wrist and waits for me to do something. I know it's there. It knows that I know. We have a stalemate at times. It is that silent yet nagging reminder that it is half way through my day and I only have 4000 steps to my name. It is that small knocking in the back of my brain that says, "Pssssst, you have been sitting at your desk for two hours. Get up off your big fat bahookie and take a walk."

I hate that whispering voice.

But I also love my FitBit for some of the same reasons. It reminds me that I have been sitting on my big fat bahookie for two hours (and sometimes more if I am really dialed in at work) and I need to get up and move. There is that happy little buzzing on my wrist when I hit 10,000 steps. I make my steps 5 days out of 7 and if I don't make it I don't sweat about it. 10,000 steps is a goal but not concrete daily thing.

And there is the fact that my resting heart rate has gone WAY down.

I guess we will stick together for awhile.

4.
Winter has finally arrived in the Frozen Northeast Ohio......and we managed to avoid it by flying out the morning of the falling snow.

It is a tough job but someone has to do it.

This also means that I will now obsessively check the weather for what things will be like on the day that we fly back. I try not to worry about this because, in the wise words of the Russian spy in Bridge of Spies, "Would it help?" No, it won't help.

But you know me, I have to have something to worry about.

5.
We have re-upped for the yearly Poultry CSA with Brunty Farms. They have gotten big enough that they can offer some different options as far as how many chickens and egg dozens you sign up for. 20 chickens is a bit too many for us, although we do love and eat a fair amount of chicken. So, I signed up for less chickens per month......

And I committed to half a pig. I KNOW! What the heck am I thinking.

Oh I know what I was thinking. The thought of all that sausage and bacon and chops and roasts and other parts just overwhelmed me and I said yes before I could talk myself out of it. I can be fairly certain that we will not eat THAT much pork over the course of a year but we will see. There aren't too many things that are more yummy than pork on the grill in the summer.

I will keep you posted as to how it goes. We will get the pork in either Spring or Fall but I am not sure wish. I am so excited.

6.
Knitting Update. I know that you are dying for that.

It will be a long time before I knit another Baby Blanket, unless of course, that a grandchild arrives. NOT that I am putting pressure mind you. I knit three of them (baby blankets not grandchildren) in the space of 8 weeks and I don't think I can do another one for a while. They are pretty much "no think"  knitting as I watch TV or read, it is just that it was miles and miles and miles of Stockinette or Garter stitch or some combination. Mile and miles and miles. But new babies or soon to be new babies do need blankets and so....I was a baby blanket knitting fool.

Traveling means that I am knitting socks. I have a tradition that when I am sitting on the plane I start a new pair of socks. Since I am doing my second annual Mystery Sock Yarn project I don't actually know what I am going to unwrap until I actually open the paper bag. Knit Picks Felici in the colorway Wizard. Squee!! Obviously I knew that was one of the skeins that I wound up in December but I just love Felici. The stripes are so happy. I will be putting in afterthought heels in black and toes in black. Thankfully I had some black yarn that was hanging around in my sock knitting box bag. 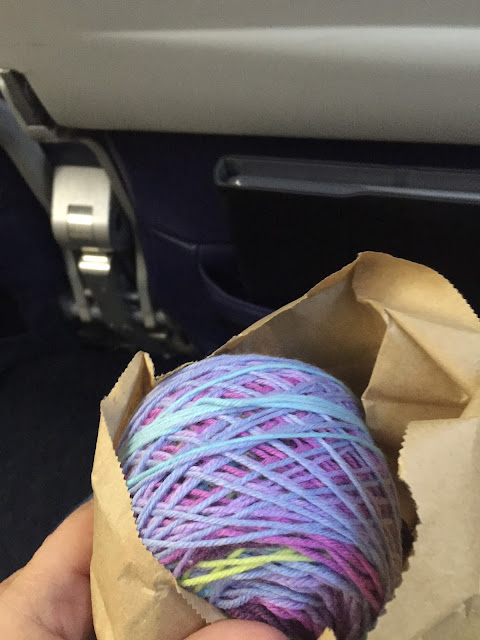 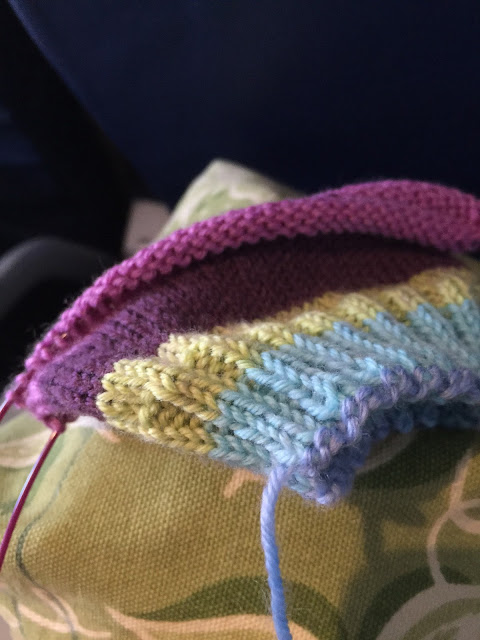 When I get back from AZ I have yarn wound up to start another sweater. I have great sweater urges these days. Who wouldn't want to wear a war wool sweater that you have knit yourself.

There are several UFOs (unfinished objects) that I need to work on but I look at them and go, "Meh" so I am thinking that they are still going to be sitting in the UFO bin for a while longer. I will get to them eventually.

And then there is the never ending sock yarn blanket that I would really like to finish some time this year.....or decade. Why do I take on these projects?

7.
Usually this last one is a bunch of Instagram photos. However, I am using my work computer so I don't have access to my personal Dropbox so you are out of luck. I will leave you with a picture that I took this morning of a fellow in the apartment across the way from our hotel, who was very happily taking his morning toke before going off to work.

Who would ever see him out on his own balcony indulging in his morning "pick me up" before going off to work. 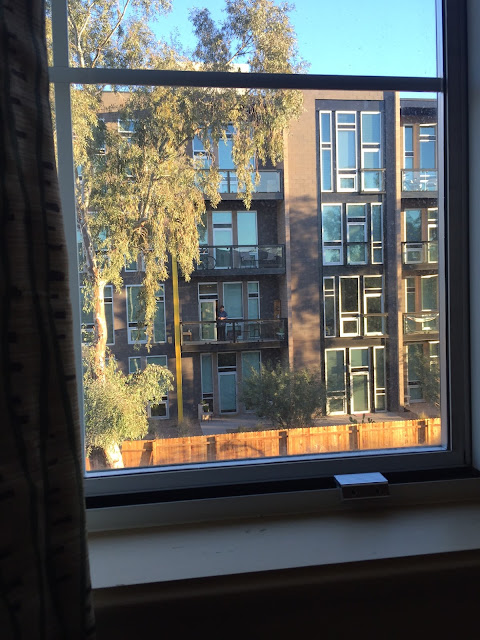 Surprise!
Posted by Unknown at 1:33 PM