The sourdough starter is alive. Let's talk about it shall we.

When last we spoke, I had finally been "starter shamed" into getting my carefully prepared, and at one time tenderly nurtured, home developed sourdough starter out of the basement refrigerator where it had been languishing, unloved and starving for............18 months. I had only a glimmer of hope that it might be resurrected. Yes, after I had done "starter surgery" and fed it, there were bubbles and hope raised it's feeble head. But, bubbles do not a sourdough loaf make.

And can I just say that basement refrigerators, while extremely useful in so many ways, are the place where things go to die. Just saying. I finally cleaned out several jars of pickling experiment that I had carted over from OCK, 4 years ago, and hadn't eaten (I am the only one here at Chez Knit who eats pickles). They had languished in the basement frig as sort of a pickling science experiment and they weren't getting any better. So I tossed them.

Where was I? Oh yes, the starter.

Well, last Saturday, after several days of feeding, I thought I might give the starter a try. I had found a recipe that seemed easy (my first mistake with sourdough!) and so I embarked. What better thing to do on a Saturday.

It was not a success. And when I say it was not a success I mean you could use it as some sort of weapon to bash someone's head in OR perhaps as a hockey puck, even perhaps a weight during your workout. Whatever your choice I would not have suggested that you eat it. HHBL was like, "NO, don't throw that away!!" But I love him too much to do that to him.

And I am a perfectionist. We were not going to eat that. But, I was also not going to be defeated by a jar full of little living organisms swimming in water and flour. I have opposable thumbs thankyouverymuch. So, I fed them several more days and looked at more videos on YouTube and looked at Pinterest (I have a love/hate relationship with Pinterest that I will explore some other time) and waited. And I realized something. The thing that I really didn't take into account when making that first boulder loaf is that sourdough takes a LOOOOOONG time. Not long in the making of the dough, that I can now accomplish in about an hour. Nope, the proofing takes 12+ hours and THAT my friends is where I had totally screwed up on the first loaf. I am a long standing baker of bread with packaged yeast. I fear it not. But, yeast bread made with those little packages, or in my case measured out from a jar, rises fast and sure. With sourdough you just have to make the dough, trust that it "feels" right and then let all those organisms get busy in the frig overnight, at least 12 hours or more.

So Wednesday evening, after dinner and before the Indians game, I got to work making my next batch. I did my measuring (measure with a scale people!!) and mixing, and autolyse phase, and adding salt, and slap and knead, and stretch and fold. Then I floured a surgical towel (another story for another time but just let it me known that I have enough of these to outfit an entire surgical suite) and put it and the loaf in a colander and stuck it in the basement frig for 14 hours. I pulled it out on Thursday, followed the baking instructions and hoped for the best...... 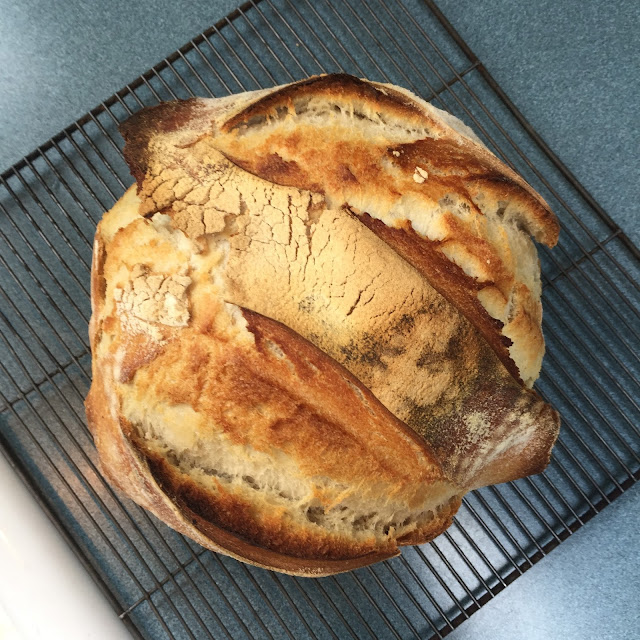 Folks, I have made sourdough bread. And can I just say that it is amazing. I was so excited about it that I made another batch yesterday afternoon and put it in the frig and then really quickly got it baked before leaving to drop Coco off at the dealership (Takata airbag recall) and then scooting to the office....... 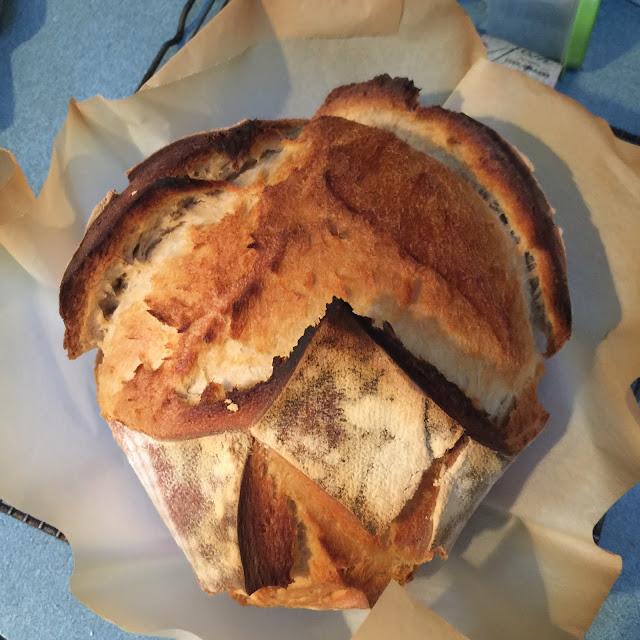 The sky is the limit from here my friends.

And we are SO having BLTs this week.