No Ornament Is Safe

It’s that time of year again! The first Monday in December……

Really, I should start thinking about this thing earlier in the year than I do. Oh, I have grand and glorious plans about having the ornaments that I give to everyone who walks in the door all done by Labor Day.

I think about it a lot.

But it never really happens.

The ornament muse just doesn’t get ramped up like Lake Effect snow until it gets cold enough to feel like Santa is Coming.

Sorry, I just finished listening to Justin Bieber’s “Santa is Coming” and now I can’t get it out of my head. Curses!

Where was I? Oh yes, The Ornament Exchange. Sometimes I feel that it would just be easier to go out and buy 20+ of the same cute ornament and be done with the whole crazy business. But NOOOOOO, I have to come up with a unique concept every year. Darn my little creative hide. I just can’t do it. I have to make something. And lest you think it is easy breezy…….

Well, if you think that then I have to think that you are not the sort of person that comes up with crafty ideas in the middle of the night and has to creep into the bathroom to write them down.

Not that I would know anything about THAT.

This is how it goes.

September: I really should start thinking about that ornament. Knit? Craft? Snowman? Santa? Other? I have PLENTY of time.

October: You know, the Ornament Exchange is like two months away. I really should get started on them…..tomorrow.

November (somewhere around the middle of the month): Oh SHIT! I have got to put my thinking cap on and get something down on paper.

It wasn’t until mid-November this year that I started working on the idea that became the thought that moved onto the prototype that finally became the ornament.

Yes, there are prototypes of the ornament. It is a straight out of my head, thought up from scratch thing (or adapted from something I saw). This year there were two, or perhaps three, variations before I got to the final product. Have you ever seen the movie “Alien Resurrection?” You know the scene where they find the lab with all the various mutations of Ripley after they have figured out how to extract her DNA from the liquid metal that she threw herself into in Alien 3 as the alien was bursting out of her chest?

Hmmmmmmm, well, it is sort of like that only not quite as gory and bloody and nobody gets eaten…..generally.

This is the 15th year for The Ornament Exchange. That means that there should be 15 unique ornaments hanging about somewhere. I was going to show them all to you…..but I still have things to do before people start showing up. But I will show you the ornament for this year.

Hope, you can look cuz you have to go to that pesky school board meeting. I will send yours home with Heather. 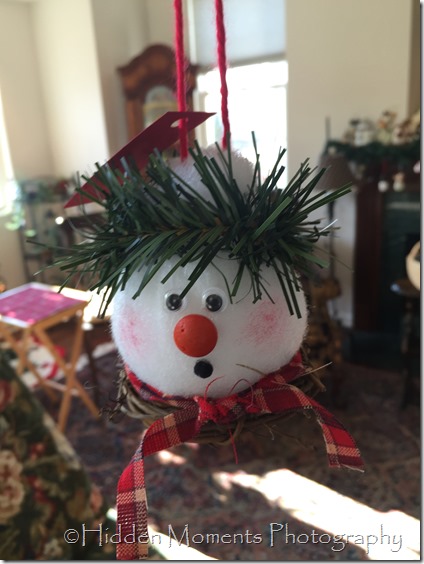 Somehow, a Snowball that looks like it is in the middle of a proctology exam just seems to fit with my crazy brain.