Ashland and Peru. Who Knew!

So, today was the annual trek down to the Ashland Fiber Festival….in Ashland, Ohio. You all are smart but I thought I should mention that. It isn’t a long drive from Chez Knit to the Ashland Country Fair Grounds, a mere hour and a few minutes. So close. And the drive was accomplished with my Sister of the Fiber, Cindie. Cindie does not knit but she does other fibery things like wet felting and needle felting. It is National Yarn Day after all. What better way to celebrate.

Cindie and I have known each other for a long time and used to live around the corner from each other, sort of, OK more like a mile apart but you still had to go around a corner to actually get to her house from mine so it is sort of the same thing.

This is our second year to go. I might have bought some yarn……..yeah, I know that comes a a real shock to all of you. A couple of skeins of sock yarn cuz, you know, I don’t have enough of that!

I just went to count how many skeins of sock yarn I actually have. I stopped after 60. We will just go with the “I have enough most likely” scenario and move on. 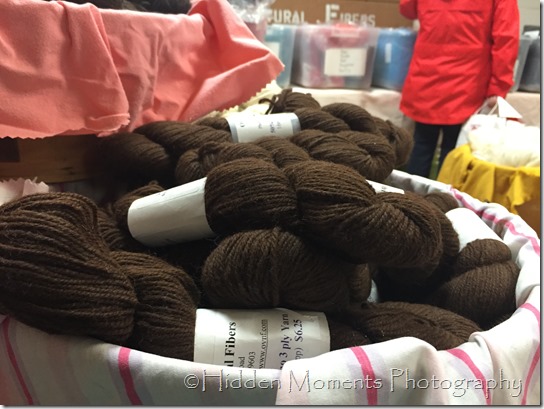 I also might have bought a sweater’s worth of yarn in this yummy brown color. Fiber produced here in my great state at Ohio Valley Natural Fiber. If you are so inclined you can go onto YouTube and find a Dirty Jobs episode where Mike Rowe visits. Ohio Valley Natural Fiber has won a customer for life in me and I haven’t even knit with the yarn at the moment. It isn’t the yarn that got me, although it is lovely. As I usually do, while purchasing I spent some time just chatting with the lovely lady who was checking me out. We spoke about all of the batts of fiber that they had and I mentioned that I am still struggling a bit on learning to drop spindle. I have said to myself that I cannot buy (although I am saving up for) a spinning wheel until I can at least drop spindle fiber.

I hate being not good at anything and therefore this is a frustration for me.

Excuse me while I look gobsmacked. She was serious. I took a 1/2 pound batt of fiber home with me in a lovely variegated color. Now to find the time to practice.

And this wasn’t even why I started this post. It wasn’t even the craziest part of the day. Cindie and I were almost done with our second pass around the building, I was slowly walking past a stall that I had already looked at before when I saw a basket with some skeins of yarn that I knew. I knew the brand because I had purchased said yarn in Lima last year. I have never seen it in any LYS (Local Yarn Store) that I have visited here in the US. The MiL and I had gone into a shop (there aren’t that many “yarn” shops in Lima surprisingly) and asked about alpaca yarn. The woman didn’t really carry all that much yarn that was alpaca.

Let that sink in for a minute. Peru, one of the countries that produces the most alpaca fiber, doesn’t sell as much yarn as they do the ready made garments. It is hard to find yarn there. Craziness.

But she brought out what she had and my MiL bought it for me. 6 skeins each of three different colorways: red, cream and cocoa. She didn’t have enough of any one color for an entire garment but I figured that I could work it out. The yarn is in the stash but every time I bring it out I think, boy I wish I had like two other skeins of the red so that it could be the dominant color and the other colors could be stripes. But it was not to be……..until today.

There, in the basket of skeins of Indiecita Baby alpaca yarn, the SAME yarn that I bought in Peru, were two skeins of red. Now it is a dicey thing to buy yarn from the same company but in two different batches because the dye lots aren’t the same and sometimes you can have a big variation in color.

And the other thing was that the woman had $10 PER SKEIN on that yarn. The MiL bought 18 skeins of that same yarn for $60 in Lima. I stood there for a while in indecision. What to do…what to do. 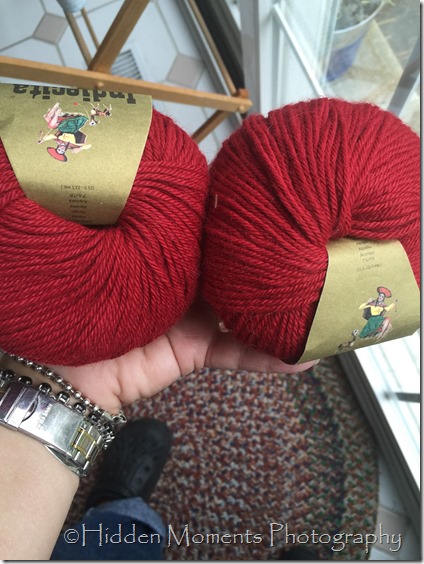