I Am In Love, Platonically, With My Vacuum

Who thinks of their vacuum cleaner. Really. Do you think about it. Do you mull over it’s properties. Do you look forward to spending time together in a shared activity.

Before I got a dog I didn’t really put much thought into the strengths and weaknesses of a vacuum cleaner. I had small children. There were a lot of crumbs and the floors were sticky anyways. As long as all the Barbie shoes were out of the way, the vacuum cleaner would do just fine. Have you ever tried to vacuum up a Barbie shoe? Not pretty. Come to think of it, there weren’t all that many Barbie shoes in our house because I made sure to throw all of them out immediately upon opening anything Barbie. Stepping on a plastic mini high heeled shoe in the middle of the night will put a cramp in your style and teach your children words they shouldn’t know. And while we are on the subject of that impossibly proportioned toy, Barbies in our home led a rather horrible existence. Ken always seemed to be missing a leg or had a shortened neck because his head had inconveniently popped off and had been thrust back on his neck with rather shortening results. Barbies were almost always without clothing or in clothing that had been constructed by the progeny. Often they would have had a “hair cut”.

More than likely Barbie and Ken would be swinging from a piece of rope, suspended down the stairwell from second floor to first floor “playing pirate”. Or perhaps they would be connected to a piece of rope so that they could “fly” in a large circle outside. Round and round and round until, invariably, someone landed on the roof of the garage. Where they stayed. Forever.

Sure we will sell you our house! The Mermaid Barbie on the roof is just an extra bonus. You can thank us later.

Where were we before Barbie so rudely interrupted?

So, OCK had a built in vacuum system. It seemed a good idea at the time and really it was a good idea…until someone would suck up a hair pin….which would make it ALMOST all the way to the receptacle in the basement before getting stuck at that last bend. Thereby gumming up the entire system. Necessitating a call to vacuum cleaner people. Meaning I had to write a check because they had to come out and get the hair pin/pen cap/quarter (quarter! who vacuums up a quarter!)/you name it out of the system. I loved that in house vacuum system but I will never put one in again.

Then we moved. Chez Knit does not have an in house vacuum system. In fact, when I knew we were moving it finally occurred to me that I actually had to have a real, honest to goodness vacuum cleaner again. What to do? I really didn’t want to go out and buy something at that time. We had just paid for a wedding. And then it occurred to me.

There was a vacuum cleaner in the basement. It had come to us along with a bunch of files from a business that HHBL had run years ago. It lurked in the basement, unfulfilled in purpose while I used it’s more jazzified cousin. Now was it’s time to shine.

My relationship with The Beast has been cantankerous at best. It was big. It was clunky. It wasn’t really all that good at it’s job. Sort of the Soviet Union of vacuum cleaners. But it was what I had. We made the best of our arranged marriage. I tried not to stress it too much and it tried to occasionally pick up some dog hair or crumbs. Asking it to pick up anything heavier than a crumb was like asking me to climb Mt. Everest.

What a fabulous idea. But no.

It didn’t like my tile floors. The beater bar occasionally tried to eat the fringe on my oriental rugs if I wasn’t watching. It had about as much flexibility as I do first thing in the morning. But when you plugged it in it worked. However recently I had been sensing some hesitation it it’s startability. I would push down on the switch and there would be an infinitesimal pause before The Beast roared to life, sending Max the Magnificent into a quivering mass of dog anxiety and neurosis. It always started, eventually….that is until Sunday…. when it started and then abruptly stopped and would no longer continue. Dead. No longer with us. A gigantic, very heavy lump of non-vacuuming Hoover. It went out to the curb that night and was picked up by the garbage in the morning.

And today, armed with several Target gift cards and a wad of cash I went and bought……… 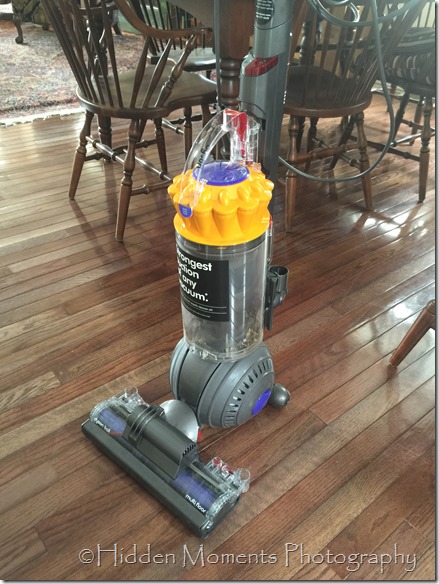 I put him through his paces this morning and by the looks of what I emptied out of the receptacle The Beast had been giving the impression of working but actually had just been loafing on the job. My poor rugs!

I am sure DD and I will be deliriously happy together.

Who knew you could be so excited about getting a vacuum cleaner.