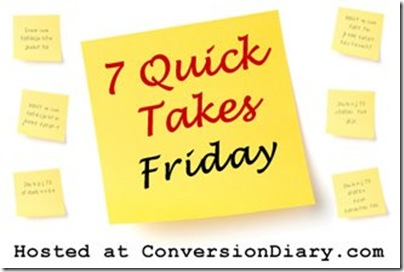 1.
Who knew that my dog could be such a picky eater? I mean really?? After this incident. And this one. You would think that he would eat anything. He has eaten 4 pot holders since the beginning of the year for the love of Pete.

I brought the stuff home and fed Max as usual. Scoop of food in the bowl with some warm water over it. He likes it that was so sue me. Usually he just inhales the stuff.
But not this time. He looked at it. He sniffed it. And he walked away. He never walks away! In fact, he walked away at every feeding for two WHOLE days. He would look at me with sorrow, sniff the offence in his bowl and walk away.
I finally gave up and went and bought the “correct” dog food and we are back to normal. But there is no way I am going to waste $17 worth of dog food so I am mixing some of the offending stuff in with the stuff that he likes and he doesn’t seem to notice.

2.
Well, it is time to start spraying to ward off Attila the Deer and his evil minions. I ask myself every year about this time why I planted things that I love but that also seem to signal dinner buffet to the marauders. But then I look at my hostas and my day lilies and I just sigh and get out the stuff.

And then I have to make the decision as to which of the liquids I should start with (I rotate sprays just to keep up the surprise). Should I start with the stuff that smells like a slaughterhouse that hasn’t ever been cleaned? Or do I start with the spray that smells like vomit. And I don’t just mean a little bit of vomit. I mean vomit like a frat house after a week long drinking binge…not that I would actually know about that. REALLY!
I chose the vomit. And thank goodness we have the A/C on today because it really stinks. But the smell goes away after about 24 hours.

Take THAT you darn four footed beasts from the woods.

3.
We lost power Wednesday night for a couple of hours. There was no apparent reason for this. No rain despite promises of such. No wind. No nothing. It was right about bedtime so we weren’t too overly inconvenienced, other than the fact that HHBL needed to take a shower after his workout but had to be very quick (the whole having a well and septic thing and not using water when there is no electricity thing. I will tell you about it sometime).

The creepy thing is that it was so silent….SILENT!! The whole neighborhood was out so it was really dark and you didn’t hear any of the little noises that a house makes. A house is never silent even in the middle of the night.

I felt like we were back in Africa at The Hotel Vanilla where the electricity only runs from 6p-10p and cuts off very abruptly, leaving you in dark and silence. Except that outside it isn’t silent. You can hear things rustling outside. And I could hear the coyotes away back in the woods and the dogs of the neighborhood barking. And the owls.

4.
HHBL and I have decided that this summer our vacation is to stay home. Oh man that sounds good. If you think about it we have done so much traveling in the last 12 months that staying home is just the thing. Since June 2009 we have been in: Florida twice, Utah, Uganda, Rwanda, and Peru not to mention numerous trips to Illinois. I am ready to be home for a time. We have ordered ourselves a book of lawn seat tickets for the Blossom Music Festival that runs July-Sept. We are going to sit on our deck (unless we manage to sell the house) and we are just going to enjoy summer.
Summer in Cleveland is magical….it offsets winter…..which isn’t so magical.

5.
Oh look what I found being built on the basement window frame right next to my garden sittin’ bench. 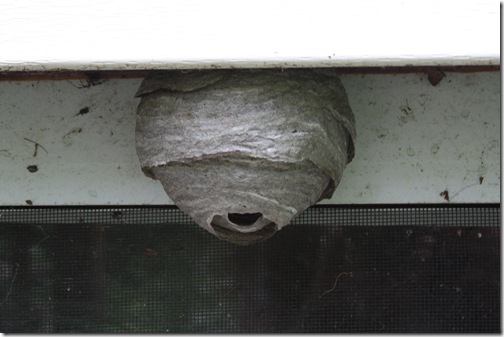 I can tell you that this thing wasn’t there when I was sitting out on the bench over the weekend. And it certainly wasn’t there when I was watering plants earlier in the week, at least I don’t think it was. I would have seen it since it is located directly beside where the water faucet is located.
And you can bet you bottom dollar that I was out in a jiffy with my trusty can of Raid and I sprayed that thing until it was dripping. And once it gets dark I am going to go out and knock it down.

6.
At the wedding the girls surprised us with a 25th anniversary tribute. Here is is (I hope)


If this works then I will put up the video of the short speech that I gave....maybe.

**** The privacy settings for the video will be changed by 10a EDT, sorry about that. I forgot to tell HHBL to do that. Bear of very little brain am I. Or it is just my nefarious plot to get you to come back. BWAHAHAHAHAHA!

7.
For some reason I am totally out of words now that I have reached #7. That doesn't happen very often I can tell you but there it is. So I will go with it. Have a great weekend everyone. We have house guests and another family wedding to go to, although this one we are not in charge of and I don't think I have to wear the Shoes of Eventual Phalanges Death. Or at least I hope I don't. We will see.
Posted by Debbie at 5:51 AM