So, this winter was on the more harsh side as winters go. I can say that now that Spring is officially here. I am not sure yet what the official snowfall total will be but….it won’t be a small number of that I am sure.

I fully expect that we will get dumped on by the gods of snow at least one more time before they are done. We always do. You can just hear them laughing as the snow pours down and dampens the joy that we feel in our hearts that Spring has sprung and the flowers are blooming and the birdies are singing.

Off topic already am I?

Are you really surprised at that?

At any rate sometimes bad things happen in winter around here. Take this for instance. This little beauty was a fern. A rather nice fern I might add. One that I actually paid some money for at the local plant nursery. Looks pretty sad doesn’t it.

I forgot it on the deck when I was bringing stuff in for the winter.

It punished me by dying a quick but horribly cold death when the snow came. But just to dig the knife in deeper after it’s demise it hung around on the deck, under the snow, and slowly emerged in the spring like some bedraggled wooly mammoth. Only without the monetary value a mammoth might bring if you dug one up in your back yard.

I was sad. I stood there and mourned a lost plant friend who gave me joy last summer but who I cruelly thrust aside in my race to get inside where it was warm. 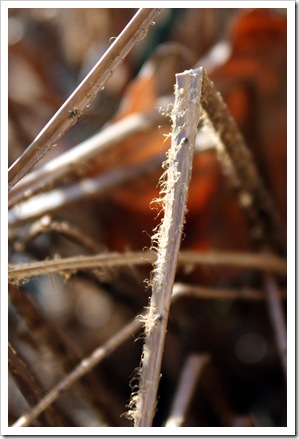 And then, because it was a nice day on the day that I discovered his lifeless corpse, I became enthralled with looking at it close up. Which meant that I had to sit on the deck and take pictures. 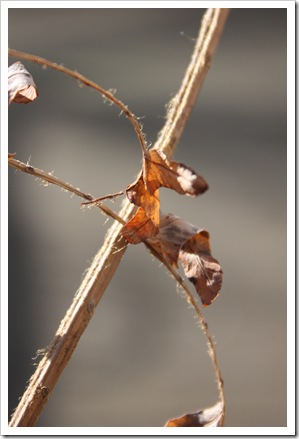 And enjoy the beauty of his little dead leaves. And wish for a Macro lens. Someday my lens will come. I am too busy right now to use one even if I had it. 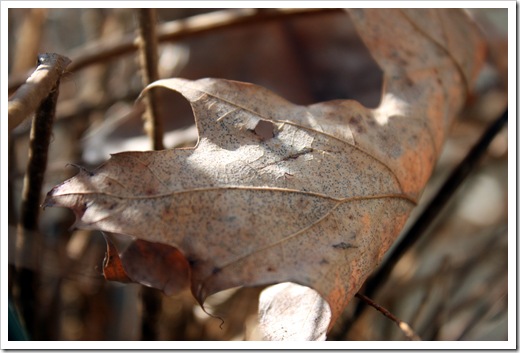 And so he gave me, even in his dry and brittle death, some pleasure on a Tuesday morning.

That is until I threw his carcass into the ravine.