I Wish I Was at the Beach

It is cloudy. It is gloomy. It is Spring in Northeast Ohio. We all know it gets like this.

Why do we complain about it?

Because we can that’s why.

I have a long and wordy post with a picture or two thrown in. I apologize. It wasn’t supposed to be this long but I just got carried away. Surprise!

OK only back to January when we were in Peru. We got to go to the beach for two days. It was fun. It was warm. It wasn’t here.

First off let me tell you that even though we were out of the city, the drivers are still nuts. That is all I want to say about it other than we lived through the experience. Remember, the rules of the road are OPTIONAL in Peru and each man does what is right in his own eyes. 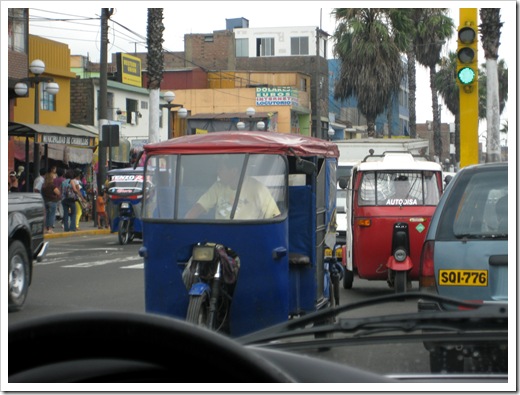 I love these little mototaxis. They are everywhere. I have not ridden in one in Lima but I have in India. Once was more than enough. Note the traffic. California has NOTHING on Lima in the traffic department.

It was about an hour and a half drive…and I was stuck in the middle seat in a Rav4 with my mom-in-law on one side and Cousin Ella on the other with my knees up around the level of my reasonably ample chest AND my backpack on my lap. Cozy. You know, it is not that much fun to drive that way for an hour and a half when you have to rest your feet on that little bump in the middle and they keep wanting to slip down and when they do you inadvertently stomp on some one’s toes.

For an hour and a half did I tell you?

The landscape is….dry. Very. Very. Dry. The coast line of Peru is desert after all. Actually the first word that I typed was dessert. Wishful thinking I would guess.

So back to the desert. 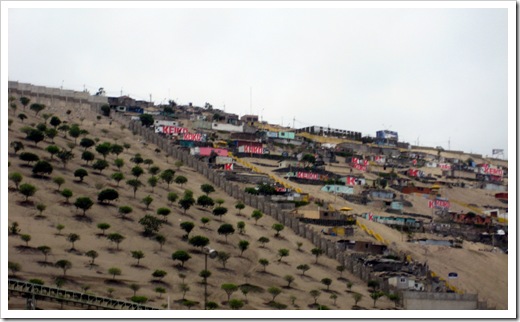 This is often what you see when you get outside of the city. The land on the left has been planted with olive trees not so much to bring in a crop, although there is that. No, the reason is because of what is at the right of the picture. If there is land, and the land owner hasn’t made an improvement or planted something on it, then chances are people will start to put up shanties and after a while a small community grows. They don’t have any running water or electricity for many years afterwards but they are there and it is nearly impossible to go back once they are. We have visited several of these communities but that is a story for another time.

We are hungry. It happens sometimes.

So we stopped for something to eat. Alberto (step father-in-law) was driving and all of a sudden we were pulling off into this very small parking area in front of this small outdoor building.

Deb: Hey Alberto what is this place?
Alberto: Debbie (said with Peruvian accent) this is a place that Bruna (his daughter) always stops at. They have bread.
Deb: Alberto you are speaking my language. I am always up for bread.
Alberto: Yes, it is filled with cheese or with olives.
Deb: Olives?? Like Kalamata type olives? Like just about one of my favorite foods in the whole world and I would eat them every day if I could olives?
Albert, after a slight pause where he looked at me sort of strangely: Yes. 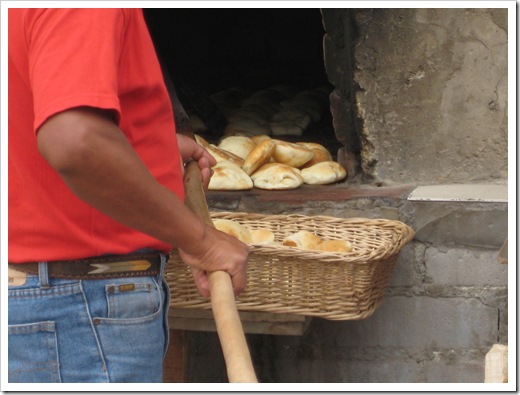 Oh look at those luscious little pillows of goodness. Right out of the big beehive oven. And they were hot let me tell you. And they were yummy and filled with salty olives.

And I am drooling. Thankyouverymuch.

I am sure that I could make something like them at home. But they just wouldn’t taste the same. Sigh. 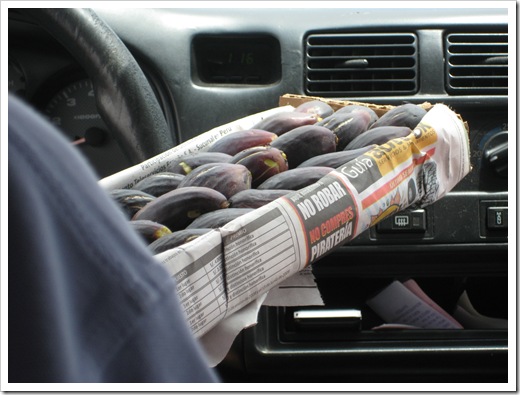 And because it was fig season in Lima we had to stop and buy some from one of the many stands that are along the road. And of course we had to eat some on the way. And no, I did not wash it before I ate it. Nor did I peel it. Just bit right in and damned the intestinal distress gods to do their worst. Sorry I said damn. There I said it again! 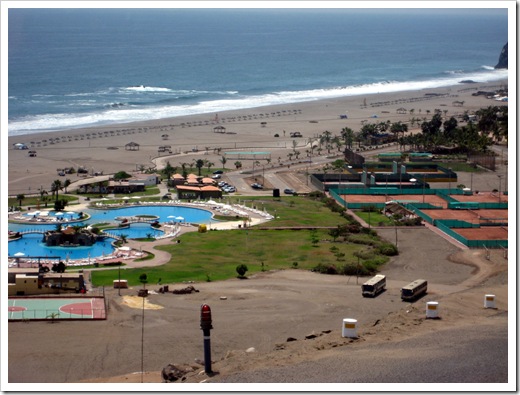 And finally, after that hour and a half drive that I mentioned previously we arrived at this. Now it wasn’t quite as easy as that sounds. You have to know where the entrance to the resort is. And then we had to go through three check points. This isn’t Fort Knox people!! But we had to

Drive up to little guard kiosk.
Guard had to take time out from doing whatever it was they were doing to look over at us.
Take out their clipboard and look at their list.
Look at Alberto’s membership card.
Question whether he could bring all these people in here let alone his wife.
Tap into the antiquated computer.
Look at all our id’s.
Write down the information from HHBL’s driver’s license. Didn’t ask to see mine because….
I was only the wife!
Question again whether we had a reservation & were all these people authorized to enter.
Sigh and wave us through.

And we did this 3 times.

Finally we arrived and parked right outside our “Boongalow” (as Alberto would say). 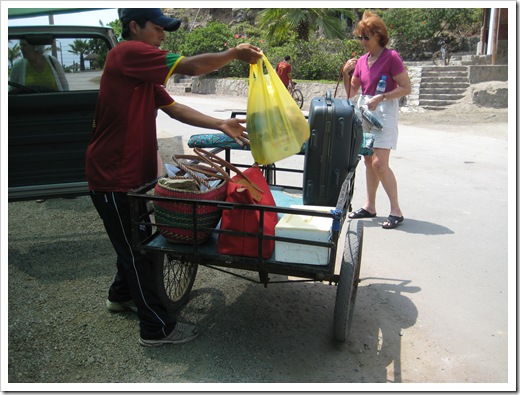 They gently put all your belongings into these little carts attached to bicycles and ride it over to your front door.

So, we had been told that the boongalow could sleep up to 8 people. Sweet! There are 5 of us and we will have room to stretch out and we won’t be on top of each other. So we open the doors and walk in and start counting beds and bedrooms.

First bedroom is about 8x6 and had two BUNK BEDS in it. OK

Looking for next bedroom….looking….looking. We see there are two bathrooms. There is a small kitchen. There is a little area that is in the front of the boongalow where there are two long concrete built in benches with cushions. No other bedrooms. We are looking for perhaps stairs that lead to the second storey where we can see that there are more rooms. No stairs.

And then I start to actually count the beds. The bunk bed room sleeps 4. The other bedroom sleeps 2…..and the concrete couches with the cushions….sleep 2. That makes 8. Hmmmmm.

Yes folks. The boongalow could sleep UP TO 8 people. If you don’t mind having 4 of you share a room the size of a bathroom. HHBL and I elected to sleep on the concrete couches.

But first…..we had to take care of the small ant problem that seemed to be going on around one of the benches. There was a very steady trail of little ants that started outside and made it’s way inside along the edge of the bench. And if you dropped anything that resembled food?

So we, OK Alberto, called someone somewhere and almost immediately a girl showed up with a can of Raid, or the Peruvian equivalent of it. Makes you think this isn’t the first time that they have had to deal with ants. She sprayed, the ants died and we hoped that we wouldn’t suffocate from the fumes. But the ants did die. HHBL itched all night and we chose to attribute it to the bug spray and not some other infestation.

Then for the next two days we did pretty much…nothing. And we liked it that way.

Rather than prolong the agony that this post is becoming I am just going to give you pictures and short commentary. That way you don’t leave right now. I want you to come back. 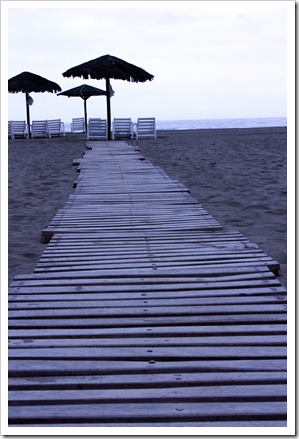 Boardwalk. This was good because the sand would get REALLY hot. 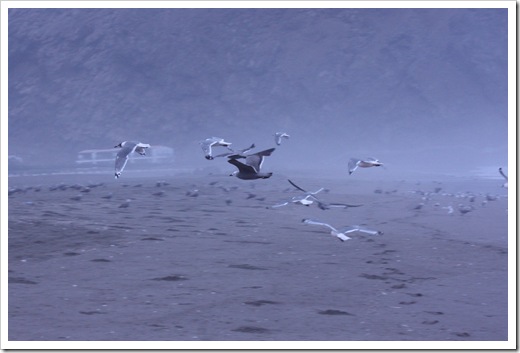 Birds, lots of birds. I felt like I should be looking for Alfred Hitchcock. 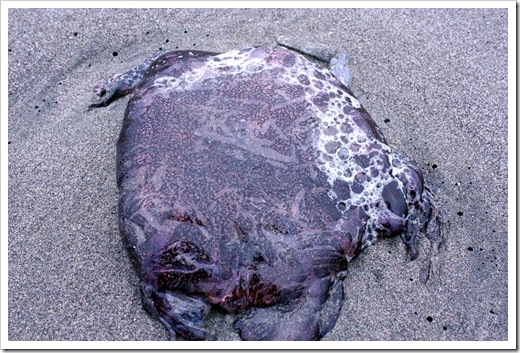 A gelatinous mass of something on the beach. I have seen the movie “The Blob” and I so wasn’t touching this thing. 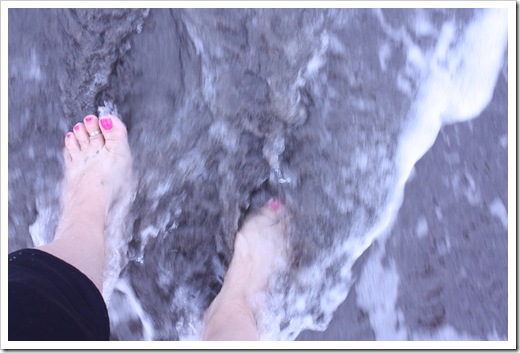 Don’t you take pictures of your feet in the ocean? 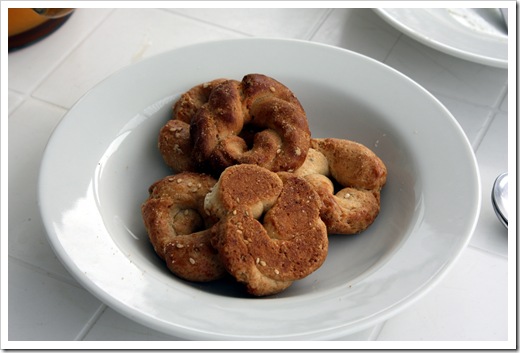 These are rosquitas. They are wonderful. We ate them every day if we could. 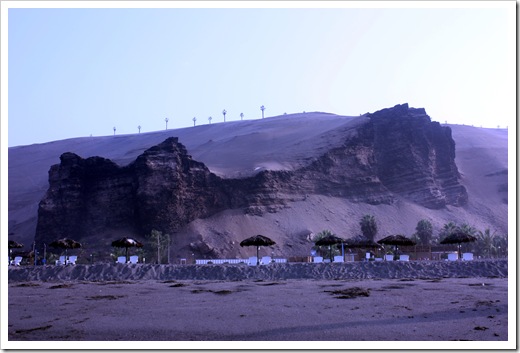 The palm trees at the top of the hill made me feel like I was in Lawrence of Arabia when I walked on the beach. Well, all except for the chairs and umbrellas. Where is Omar Sharif when you need him. 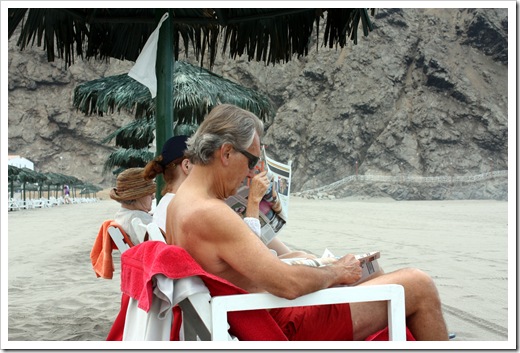 It is a hard life but someone has to step up to the plate and take one for the team! 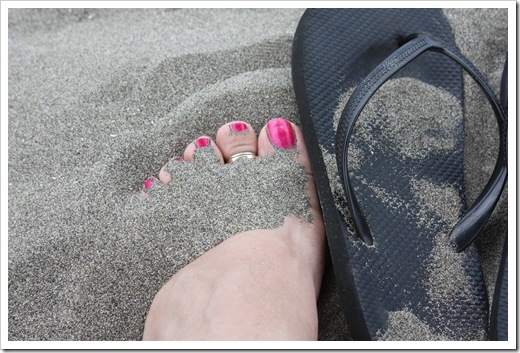 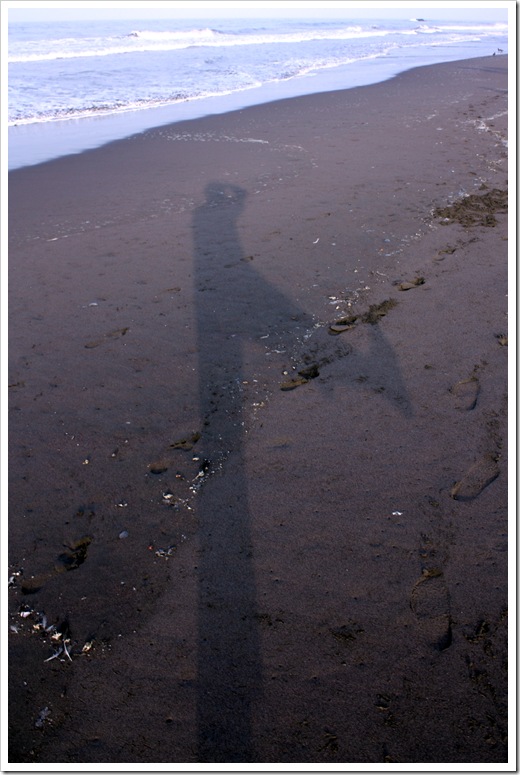 WEEEEEEE I’m at the beach! 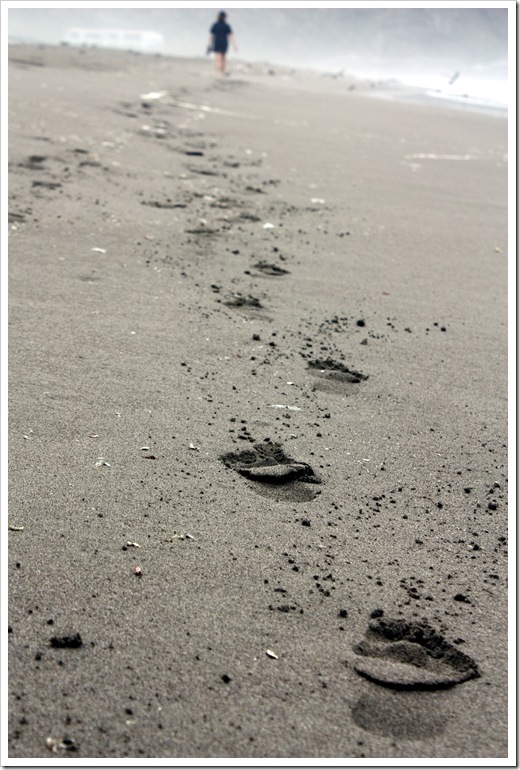 And as we walk off peacefully into the sunrise…I wish I was back at the beach and not stuck at home watching the HVAC guys replace an entire air conditioning unit because of ice damage.

Don’t worry, I am going to tell you that story next week. After I get over the sticker shock.