Today is the last day in the 8 year presidency of George W. Bush. I doubt that there will ever be a time when I could say this personally to him so my blog will just have to do.

Thank you President Bush for keeping me and the country safe the last 8 years. Your critics scream that you have made us less safe during your presidency but.....I don't recall any terrorist attacks on American soil since 9/11/01. Did I miss one? No? Then I believe I am safer. Do you think for one nanosecond that if the Islamic terrorists who hate us so virulently had been able to they would have hit us again. You bet they would! Do you think that they have stopped trying? I believe that they have tried again and been thwarted, we just don't know all that is going on and has gone on. I for one don't have National Security clearance (and don't want it for that matter) so am not privy to all that has gone on. Think how you would deal with things if YOU had the security of an entire country resting on your shoulders. Think you could have done a better job? I doubt it.

"As the years passed, most Americans were able to return to life much as it had been before 9/11. But I never did. Every morning, I received a briefing on the threats to our Nation. And I vowed to do everything in my power to keep us safe." George W. Bush in his farewell speech to the nation.

Thank you President Bush for your compassion and caring. If you think that this man isn't fully aware of the fact that soldiers have given the "last full measure of devotion" on his watch then you are blind. All you have to do is Google "pictures of President Bush and wounded soldiers" and you will be overwhelmed. How many times has he quietly visited Walter Reed hospital or taken time out to run with soldiers or visited with the families of servicemen who have been wounded or have died. He hasn't asked or sought publicity when doing these things. He has just done them because they were the right thing to do. I might remind you that he has had the unenviable task of presiding over 6 Medal of Honor ceremonies. 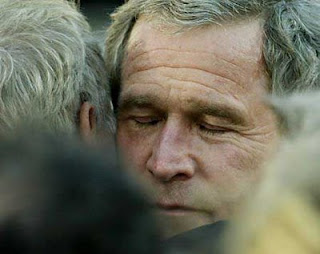 Thank you President Bush for the freedom that has been brought to the people of Iraq. We can debate another time the minute details of the Iraq war. I would be glad to have lunch and chat about it. But I think that this picture says it all. Thank you to The Anchoress blog for the pic. 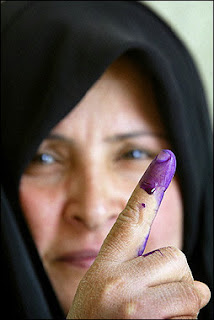 We take for granted the privilege that we have of voting for our leaders never thinking that there are so many places in the world that don't have that privilege. Now Iraq does. Deal with it.

Thank you President Bush for doing what is right and difficult in the face of unbelievably nasty opposition. Thank you for following your conscience and doing what was in the best interests of the nation. I can't think how hard it must have been to get up every day and know that there was so much BDS (Bush Derangement Syndrome) out there. You have done your job with seriousness and humor. Humor at the situation and humor at yourself. I always have more respect with someone who can laugh at themselves and the situations that they are in. I hope President Obama can do the same (haven't seen it yet).

Thank you President Bush for your commitment to Africa. If you only followed the news coming from the MSM (main stream media) you would never know that George W. Bush is well loved in Africa and with good reason. Here is why he will be remembered well in Rwanda and Africa. Thank you to The Anchoress for the link. Didn't know about all of that did you? We all should have.

Thank you President Bush for the picture of love that you have shown in your commitment to your wife, the respect that you show for your parents and the pride that you have in your children. After the last president that is refreshing. Thank you also that you have been willing to say that there were times in your life that were not good, that you struggled but that you persevered and overcame.

I could go on and certainly this is just my list. I can't inumerate for you all the governmental things that have happened on his watch, for a great round up of that go to this post at Gateway Pundit. I just want to say thank you. You will be missed.
Posted by Debbie at 5:33 AM

Email ThisBlogThis!Share to TwitterShare to FacebookShare to Pinterest
Labels: Politics