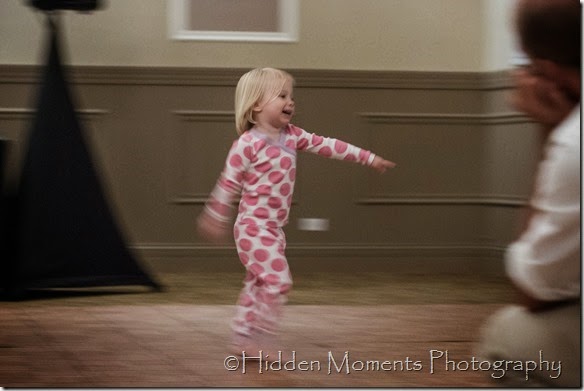 Even though I am pretty sure that Mollie’s parents did not give her any caffeine, she had more energy at 8p than I ever display even after my morning vat of coffee.

And just an aside, I think the guy on the right in the picture was a guest at the wedding we attended this weekend, and I am going to throw out a big criticism here, even though it isn’t my fight to fight. I observed what I can only describe as thoughtless photographic behavior from this guy and I felt VERY bad and more than a bit angry for the actual wedding photographer, who was working her butt off and doing the wedding alone. This fellow, with his camera, more than once got in the way of the actual photographer. Specifically with the “first dances”. He took his camera and not only stepped into the shot but he walked up to the couple ON. THE. DANCE. FLOOR. to get “his” shot thereby making the actual paid photographer have to move in order to be able to have the couple be the sole focus of the shot.

The wedding photographer, as far as I could see (and I did watch), spent a boat load of time repositioning in order to adjust to this fellows thoughtless behavior.

I might not have been so nice about it.