A Waxing Eloquent of the Water Kind

HHBL and I are pretty down to earth people. We stay at the budget Best Western when we visit Cartoon Girl in the big city. We canceled cable because they want to suck our bank account dry charge too much. We count our pennies, believe me! We use it up until it can’t be used up any more before we replace or don’t replace. Our tastes are simple.

But we aren’t down to earth in all things. We are snobs about some things.

We are beer snobs. If someone told us that the only beer we could drink from now until the end of our days was something on the order of Miller or Bud or Michelob…..we would never drink beer again. Rather no beer at all that pissy water calling itself beer. We are snobby enough in the beer department that I regularly pay…..$11.99 for a SIX PACK of local Brewkettle White Rajah IPA. You read that right, $11.99 for six bottles of beer. But oh are they good.

We are milk snobs. Skim milk? I don’t think so. 1%? I don’t think so. 2%? Now you are talking! We are milky enough snobs that I pay, what in grocery budget terms is an arm and a leg and perhaps a left buttock, for the privilege of getting organic milk from a regional dairy. HEY, I can recycle the bottles for cash so it is all good!

And perhaps we shouldn’t even speak about the coffee snobbery that goes on around here. The whole, “I make my coffee every morning with fresh ground beans in a French press” falderal that I participate in. I am WORTH the good coffee I tell ya!

We are also butter snobs, at least the stuff that we keep on the counter for liberally slathering on our morning toast. And I suppose that you could also call us toast snobs because it isn’t going to cut it if the toast isn’t made with bread that I made myself.

And, I am sorry to say, I at least am a drinking water snob. I didn’t used to be. Before we built OCK I drank the water out of the tap like most people. Come to think of it, I don’t think I drank all that much water in those days. I drank milk, skim milk (yuck patooie). I drank fruit juice, also something that has been banished from my liquid repertoire. Crazy as it sounds now….I did not drink coffee. But I didn’t drink all that much water.

And then we built OCK…and we put in a reverse osmosis system for our drinking water. Do you know what an ROS does? It takes out all of the things that you have just put into your water when it went through the softening process. It went in softened well water and it came out glorious. I was skeptical, I will admit, when we talked about putting the system in and even as the Servisoft guy was hooking everything up my little skeptical self was saying, “Yeah SURE this is the best water that you have ever tasted. OK, I will take a drink but I am betting that it won’t taste……won’t taste…..Oh my stars and garters this is the best water EVAH!”

And it was. Oh it was. Folks, the liquid items that I intake are limited. Coffee-milk-beer-wine-water. I am surprised that we didn’t burn out that system with the intense usage that we gave it over the next 13 years. All of our ice was made with water from the ROS system. The water that came from the spigot on the refrigerator was water from the ROS system. We even had a spigot over by the sink that we could dispense water from the ROS system. Glorious. Of course I would complain when I had to change the filters on a yearly basis. Those filters cost an arm and a leg and a right buttock. And changing them meant that you had to turn off the water from the well tank to the house and then gingerly unscrew the filters thereby guaranteeing a face full of water as it squirted out at you while you were desperately trying to screw in the new filter.

So let me say that when we moved from OCK to Chez Knit last year I mourned the loss of my ROS water. It was back to ok but certainly not great tap water. Yes, I suppose we could have bought bottled water but remember the first part up there about us being simple and frugal. Ripping through bottle water doesn’t really fit with that. And believe me, we would be ripping through water because we drink a lot of water.

And then today, the problem was solved. I was wandering around in Goodwill and there on a shelf, just calling my name was this baby…. 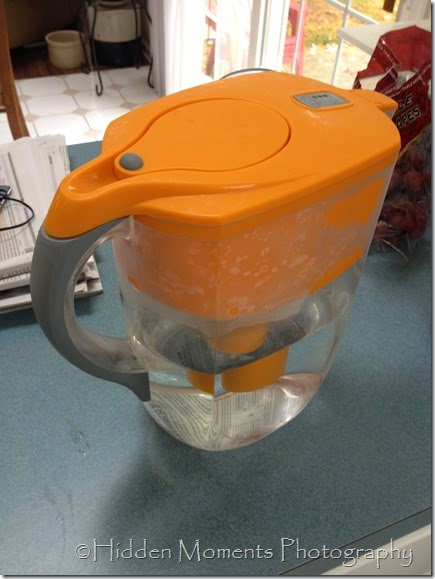 I walked right by her at first because she was Orange. Yes, I am orangophobic. Orange and I do not get along. Orange is so very….orange. I passed her by and then I stopped and went back because…..

HEY! Isn’t that a Britta filter pitcher? Hmmmm. In good shape? Check! It is orange but I can overlook that I think. And the price was……..

I zipped over to Target where I was delighted to find that I could buy a package of 4 replacement filters at a reasonable price AND they would give me a $5 Target gift card for the privilege of doing so. I also found out that the Britta pitchers cost $35 when you buy them new. $35 for a big hunk of plastic!! That just made my $2 purchase all the more excellently awesome. Went home, washed everything thoroughly, put in a new filter, filtered some water…….

Oh Mother Mary and All the Saints in Heaven!!! We are back in delicious water business.